Drawing from a lost well

Artist, writer and musician, Barry is a member of IMMA's Visitor Engagement Team Facilitating Talks Tours and Workshops for IMMA visitors. Barry studied Drawing and Visual Investigation at the National College of Art and Design and has a Masters in Visual Culture: Art in the Contemporary World. By Barry Kehoe
Sat May 16th, 2020 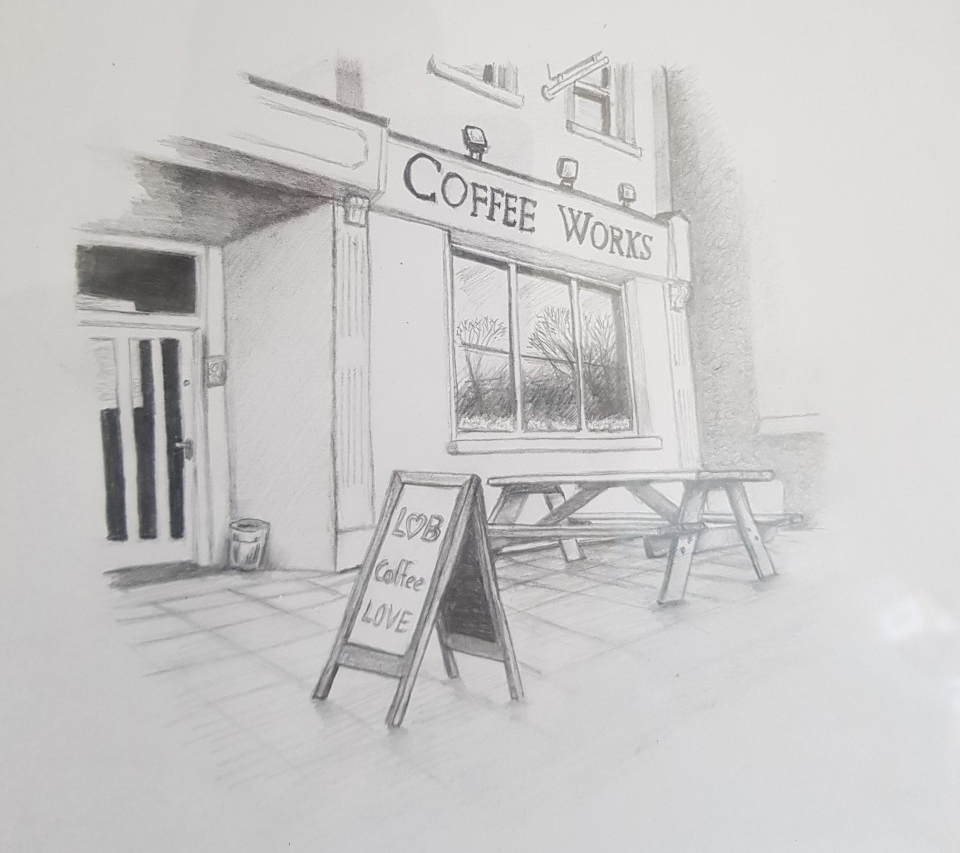 National Drawing Day takes place today Saturday 16 May and although we cannot draw in the galleries this year IMMA is looking to explore our local and more immediate environment. Looking in detail at the world within the limits of the 2-5 kilometres where we are allowed to exercise and move freely. Drawing is a way to slow down and take stock of what is around us, to focus an the detail and the beauty of the small and intimate. It has a meditative quality as we become so focused on our task but it also demands that we look and study our subject very closely, helping us gain a better understanding and perhaps even discovering a new aspect to something we thought old hat and very familiar.

In this article Barry Kehoe, artist and member of our Visitor Engagement Team, explores his local environment through drawing, making maps and graphic comics to illustrate and investigate the strange layers of time and mystery to be found in a limited area around his home. Perhaps on your next walk, take a pencil or pen and some paper and do a quick drawing of something you find that is interesting or warrants further investigation. It could be of a place you used to go and look forward to going to again when it reopens. You could even share your drawings with us by posting on social media with #IMMADrawingDay.

“There is a place where the sidewalk ends,

And before the street begins.

And there the grass grows soft and white.

And there the sun burns crimson bright”

Shel Silverstein, Where the Sidewalk Ends.

At a time when the routine rhythm and pace of our daily life has become so altered, smaller and slower paced, I think back to two recent exhibitions that we had in IMMA. One titled Voyages, showing the works of Mary Swanzy and the other titled Life above Everything, showing the works of both Lucien Freud and Jack B. Yeats. Yeats and Swanzy in particular were two artists who immersed themselves in their surroundings and channelled their observations of the world around them into their work. They both relied heavily on recording what they made in sketch books and later using those sketches as inspiration for their paintings. They both travelled the world digesting and recording the hustle and bustle of city and country life, in places both near and far, like market days in Sligo and in the Czech Republic. Subjects were as diverse as carnivals in New York and the daily life of the Samoan Islands.

Now, as we are unable to travel and study the world in motion as they did I think of artists in the IMMA Collection that limit their study on the smaller things and the immediate universe that surrounds us. I think of Charles Brady and his White Shoe Box (1987) and Tom Molly’s work titled Oak (1998), where he meticulously records the leaves of an oak tree in extraordinary detailed pencil drawings.

So, in a desire to explore the world, with the limitations imposed by the radius of 2-5 kilometres, I began to explore my own immediate surroundings. I would never have had the opportunity to do this if the world had not come to a halt and offered up an extraordinary chance to study and explore my own island that has been created by the imaginary border of this zone, the centre of which is the house where I live. Like the children in Shel Silverstein’s poem Where the sidewalk ends, I am confined to my block unable to cross the street and the sidewalk kerb becomes a great chasm a barrier that leads to an unknown world.

However, for now, disconnected from the rest of the world in the centre of my zone, once a familiar place, I sit and ponder. This place that was once located in and connected to a much greater world with endless vistas and territories spreading outwards in a greater arc to circumnavigate an entire planet. Shrunk by circumstance, there is little comfort in this estranged, uncanny place that should feel like a well-known haven and safe harbour.

So, I too turn inwards, the only direction possible, seeking an understanding of this new territory that looks and feels so much like the familiar place I once knew. To know it again and understand it better I move through it daily on walks that cross various boundaries, paths, roads, housing estates, football pitches, shopping centres, public parks, industrial warehouses, sprawling building sites that eventually give way to a profound discovery. Taking pleasure in the detail of previously ignored and unseen spaces that were always a blur that sped by on my daily commute to far way places.

As like the dérive of the flâneur, with my dog Arlo and my sketchbook in hand I wander and pause and draw, taking the occasional photo and making drawings for a visual reference library of close observations, making maps, researching details, histories, structures and infrastructure that criss-crosses the zone, making marks, scarring it like a palimpsest that has been over-written by generations that expands horizontally across the zone and vertically through time, past, present and future.

To draw is to slow down, to idle, to dawdle and take in the minutia of detail that can lead to later research and travels through time and space, understanding and knowledge. I pass the familiar café where often I sat looking upon the village, closed for so long but open again for takeaway. I spot a post box with a VR, an original from the first postal service of Queen Victoria, standing beside a modern contemporary box now nestled in the heart of a 1970’s housing estate. There is no trace of the steam tram depot that once terminated here. Further along a gap in a hedge leads to a waste ground intersecting three different places and all paths emerge though an abandoned barn onto Tubber Lane. A planning permission notice promises the waste ground will someday become a manicured park under the care of Dublin South County Council called Tubermaclugg Park. “Tobar na gClog” in the native tongue, named for some ancient monks that once lived nearby.

An ancient well and a clock, drawing water forth from the earth and marking the passing of moments, Tubber lane takes us out past the building sites of encroaching suburbia past an ancient road marker and on past the back entrance to the Department of Agriculture, Farms and Fisheries Depot at Back Weston and finally to the over grown ruins of the 13th Century church at Aderrig, before the road turns south again crossing the Great Southern and Western railway line and on further south toward the Grand Canal bridge at Hazelhatch and turning east we walked back along the canal past derelict canal. depots to Adamstown and finally home again.

Once I had returned I started to draw and set down this adventure, to draw out and draw forth from the well of memory, understanding and thought. Attempting to articulate an alternative dimension to this moment of isolation. Confined by the limitations of this arc that is not visible to the eye and circumnavigates our home, I will continue exploring. As it yet has many more secrets to reveal. One would hope somewhere far away, where the distance lives in mysterious shades of blue, we might find ourselves someday on the white space of our map in unknown regions.

A Field Guide to Getting Lost, Rebecca Solnit.

Recommended Works from the IMMA Collection about Wandering

Where the Sidewalk Ends, Shel Silverstein.

IMMA participated in National Drawing Day on 16 May 2015 with a free, all-ages drawing workshop. 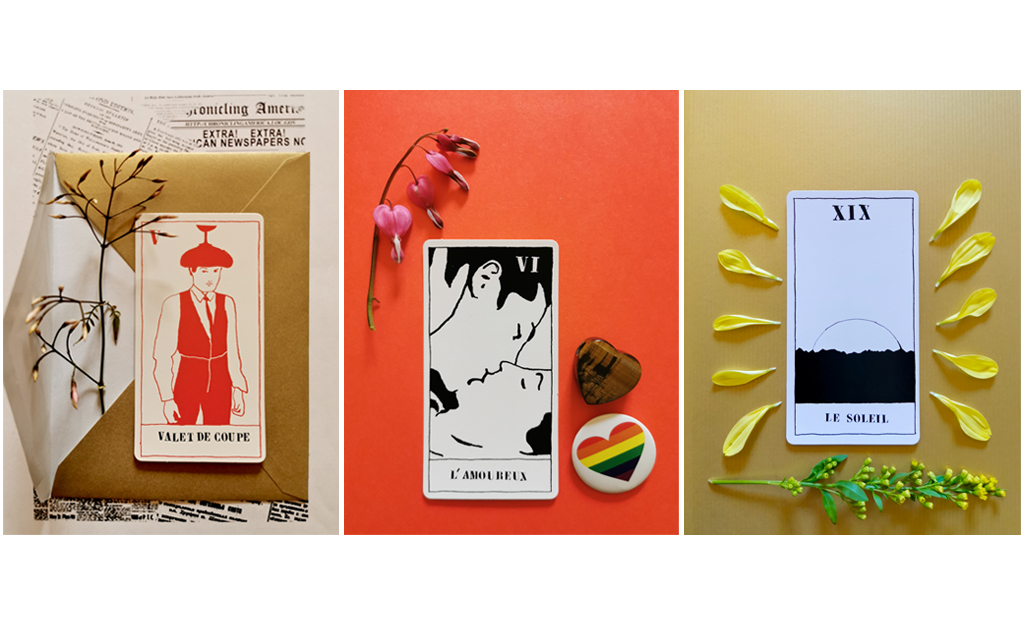 Ulla von Brandenburg, Tarot Set, 2008. Photos by Chris Jones
German artist Ulla von Brandenburg draws on a range of influences including astronomy, astrology, expressionist theatre, Hollywood film, chess, magic and pre-Freudian psychoanalysis. Her films, drawings and installations present uncertainty but also curiosity and intrigue. Based on the Marseille deck, von Brandenburg’s 79 piece tarot set was created, together with designer Clemens Hanicht, on the occasion of her solo exhibition, Whose beginning is not, nor end cannot be, in IMMA in 2008. Used as a tool for divination since the late 14th century, the tarot has endured and guided for hundreds of years. This week, Chris Jones, our Visitor Engagement Supervisor, has selected a card for you to enjoy each day. Chris explores each card with insightful details for us to ponder daily. He has also beautifully photographed the cards. ................................................................... L’Hermite - The Hermit A most appropriate card for these days – The Hermit tells us that now is the time to withdraw from the world and take refuge in solitude and contemplation. This is a time for slowing down, for turning inwards, for healing, for being thankful for what we have and mindful of those who have not. It is a time of patient waiting. Remember that Solitu...
Manage Cookie Consent
By clicking “Accept Cookies”, you agree to the storing of cookies on your device to enhance site functionality and analyse site usage.
Manage options Manage services Manage vendors Read more about these purposes
Cookie Settings
{title} {title} {title}