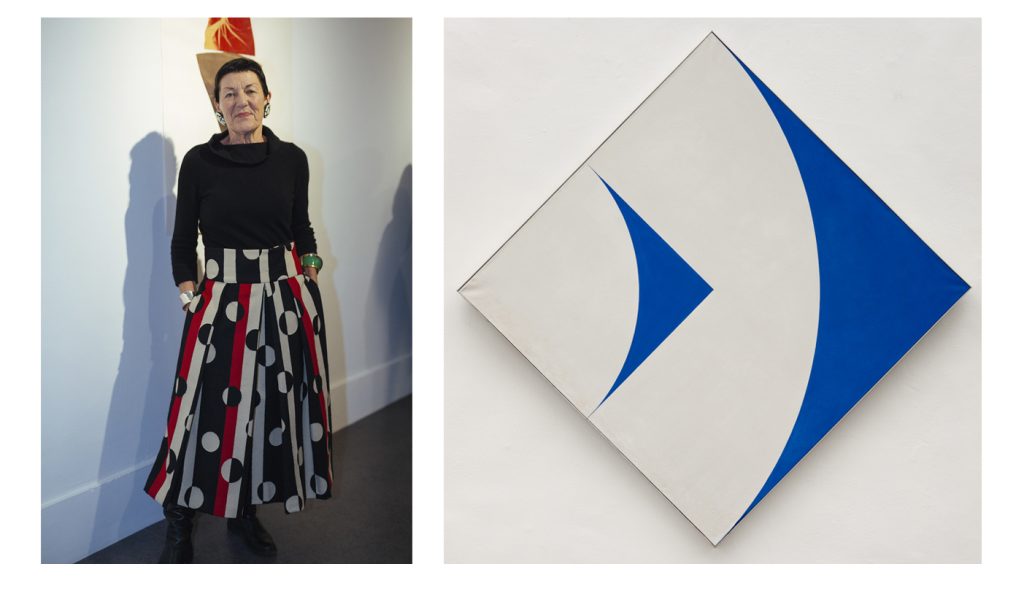 Here we reflect on two remarkable artists and people, Janet Mullarney and Tim Robinson, who we had the pleasure to work with and get to know over many years. Our thoughts are with their families and many friends.

We were deeply saddened to hear about the recent passing of Janet Mullarney, an artist who touched the lives of IMMA’s team both on a personal and professional level.

IMMA enjoyed a long-standing relationship with Janet, her sculpture Straight and Narrow purchased in 1991, was one of the Museum’s earliest acquisitions and her works from the Collection have been widely exhibited at IMMA and through exhibition loans.

We will be forever grateful for Janet’s dedication and commitment to her recent Then and Now exhibition, at a time when her illness seemed like an inconvenience rather than an endurance. Janet’s rigour, generosity and humour during an extensive installation was humbling and inspirational. Inventive, creative and wonderfully irreverent, she will be sorely missed and fondly remembered by IMMA’s staff, past and present. We send our heartfelt condolences to Janet’s family and wide circle of friends.

Claire Walsh from our Collections Team, who worked with Janet on her ‘Then and Now’ exhibition, reflects on that time;

What a woman! – the phrase appeared in several condolence messages exchanged on the day we all heard the sad news of Janet’s passing. It didn’t seem like enough but it also said everything that needed to be said – she was amazing. I was lucky to spend time with Janet installing her exhibition ‘Then and Now, Janet Mullarney’, at IMMA last year and so I got to experience her magic in action. The way she spoke about her work was so precise and unusual that secretly I noted down many words and phrases during that time, rereading them in an attempt to get closer to what and how she was thinking. There are no quick clues. The vast body of artwork she leaves behind are an extension of her enigma, delighting in the wonders of mystery and the ambiguity of our intentions and self-knowledge. IMMA is the honoured caretaker of a number of these works which will be looked after and shared with visitors far into the future. Two beautiful poems by Sarah Clancy, written in response to Janet’s exhibition, are available to read here.

Helen O’Donoghue, Head of Engagement & Learning at IMMA reflects on her relationship with Janet;

Growing up not far from Janet, in Rathfarnham, I recall her as quite a mythical creature. Her talent was well known locally as she was one of the children who won a Caltex award (former name for the Texaco Children’s Art Competition) and then she disappeared and went to live in Italy. She remerged in Ireland in the late 1980s, with her exhibition of powerful wooden carved figurative sculptures in the Project Arts Centre (curated by Jobst Graeve) and it then toured to the Orchard Gallery (curated by Declan McGonagle).  Janet first came to IMMA in the early 1990s as an artist in residence and later was shortlisted for the Glen Dimplex award. It was in these years that I got to know her. My admiration of her as a tenacious individual grew the more time I spent with her. She powerfully mined her upbringing in a very ‘closed’ Ireland as the subject of her work and created beautifully crafted artwork that always surprised and moved the viewer. Janet contributed so much to IMMA over the years, along with the aforementioned, she was one of the first artists to participate in our National Programme bringing her work and facilitating a talk about her practice in Mountshannon Church, Co Clare. She has donated important work to the Collection and her public talks are part of our archive. She touched so many with her work and her personality. She will be missed by the wider arts community and especially her family and close friends.

A personal note from Christina Kennedy, Head of Collections at IMMA:

It’s only when we lose certain people that the enormity of what they occupy in our mind if not always in our day to day, really crystalises. Janet was such a person.

I first got to know Janet when I curated her Hugh Lane show in 1998 and from then was privileged to build up a friendship over time.  Even if our paths didn’t cross frequently, it always felt that we picked up where we left off.  Through her work Janet has given us an incredible repertoire of ‘selves’ to draw on depending on how we are feeling in relation to the world.

I recently received a moving email from Janet about her IMMA Collection: Janet Mullarney, ‘Then and Now’ show, which I now share:

“.. I would like to add the following, it was such a treat, such a lovely group of people to work with, all the way across the board. So much easy help to gain what I desired.
Thank you so much for trusting me, giving me the full length of the corridor, and allowing lovely things to happen, like Helen O’Leary, and Sarah Clancy. It was really a wonderful experience, and you were the fabricator.”

I would also like to take this opportunity to acknowledge Catherine Marshall, former Head of Collections, IMMA and long-time champion of Janet’s work and Mary Ryder, a dear friend of Janet’s. Both created the record of all of Janet’s work in a catalogue raisonne produced with Janet’s help, published last year.

“Risk and proof, maths and the imagination, structure and freedom – somewhere near here is buried the binary opposition that has informed my creative life”

The passing of Tim Robinson, preceded two weeks before by his wonderful wife and partner in all his life’s work, Mairead or ‘M’, is a piercing loss, in Tim’s case accelerated by the Coronavirus.

We convey our affection and deepest sympathies to their family and friends.

So many of the tributes to Tim Robinson deservedly centre on his wonderful writing and map-making of Connemara over the past 40 years.  Less widely known is his achievement as artist.  Born in Yorkshire in 1935, Timothy Robinson studied mathematics at Cambridge and taught for three years in Istanbul.  Assuming the moniker Timothy Drever (his mother’s maiden name), he began to work full-time as an artist from 1962.  He exhibited at the Galerie Fuchs, Vienna, where he and M lived for two years, returning to London in 1964 where he subsequently showed at Signals Gallery and the Lisson Gallery London.

The aesthetics of Tim’s paintings are underpinned by his mathematical training, his love of geometry, astronomy and physics as they relate to the natural phenomena of gravity, geology, patterns of weather, tidal and lunar activity.  Arcs and circles, magic squares and forms from fractal geometry are reflected in his paintings and environmental installations of the London period. They situate among conceptual frameworks that were emerging at the time, seen also in the work of Richard Long, Hamish Fulton, Art & Language and others.

As the decade wore on Drever’s artwork became increasingly ideas-based, conveyed through photographs, texts, prints and discrete objects, and more ‘invisible’- so he too, despite certain success, made the decision, quite abruptly, to extract himself from the London scene. In 1972 he and M moved to the Aran Islands, where he reverted to his original identity: Tim Robinson.

On Aran he learned Irish and began his visual and textual interpretation of the Western landscape through walking, hand-drawn maps and writing, in works that explore the language, landscape history and mythology of the Western seaboard.  Many of the same preoccupations reverberate through his work, as artist, topographer and writer, to do with rhythms of walking and his concept of “the good step”.

Tim’s essay, Backwards and Digressive’ weaves together the connections between his work as an artist, a chartographer and a writer.

In 2015, IMMA became the beneficiary of a major donation by Tim and M of all of Tim’s artistic works including paintings, drawings and installations as well as their extensive art archive. The gift consists of early “juvenilia”, works from Vienna and paintings, drawings and constructions from 1964-1972 in London. It includes the rods installation first shown at IMMA as part of the exhibition ‘The Event Horizon’, 1997, curated by Michael Tarantino.  More recently this work formed the exhibition “The Decision”in the Hugh Lane in 2011.

Also donated is the 22ft long, much-walked-upon ‘Distressed Map of the Aran Islands’ , shown first in Cork 2005 Capital of Culture and later in Hans Ulrich Obrist’s Serpentine Gallery ‘map-festival’ in 2010, a map of ancient features, lore, place-names and their meanings, as well as an urgent call on behalf of the islands’ unique environment (and Connemara in general) and vulnerability to the erosive effects of environmental change accelerated by the subversion of planning regulations. A key aspect of the map was that that viewers were encouraged to step on it, and even leave written notes.

IMMA first showed a selection of Tim’s paintings in 2016 in the exhibition IMMA Collection: A Decade and later in Coastlines 2017 which included an iteration of his ‘Distressed Map of the Aran Islands’.

Tim’s significance as an artist in the London Art world of the 1960s was evidenced in 2018 when his work was sought for Signals: If You Like I Shall Grow, organized in London by Mexican Gallery Kurimanzutto, in celebration of the innovative but short-lived gallery Signals London (1964-66). The exhibition reconnected the works of many now celebrated artists, who showed at Signals and who worked across Latin America, USA and Europe, including Hélio Oiticica, Lygia Clarke, Mira Schendel, Liliane Lijn and Mary Martin.

When discussing the donation at Tim’s studio and home in Roundstone in 2014, Tim touchingly described the task as “..a step towards our leaving Folding Landscapes in the not-just-yet..”…

Tim walked every inch of the Aran Islands and of Connemara’s involuted shorelines, stepping across jagged outcrops, flags, crevices and bog. Out of this daily practice he developed “the concept of the good step” which informed his entire philosophy, creativity and being:

The step, so mobile, so labile, so nimbly coupling place and person, mood and matter, occasion and purpose, begins to emerge as a metaphor of a certain way of living on this earth. It is a momentary proposition put by the individual to the non-individual, a not-quite infallible catching of oneself in the act of falling…   (15th Oct 2014 Unrealized Projects)

'Personage' and 'Holy Show' are two new poems by Sarah Clancy, commissioned by IMMA and written in response to Janet Mullarney’s exhibition, 'Then and Now: Janet Mullarney', 15 Feb-29 Sept 2019. Personage re...

Olive Barrett, from our Visitor Engagement Team, gives us an insight into how visitors to the exhibition Patrick Hennessy De Profundis are surprised with how talented, skilled and forward thinking Hennessy a... 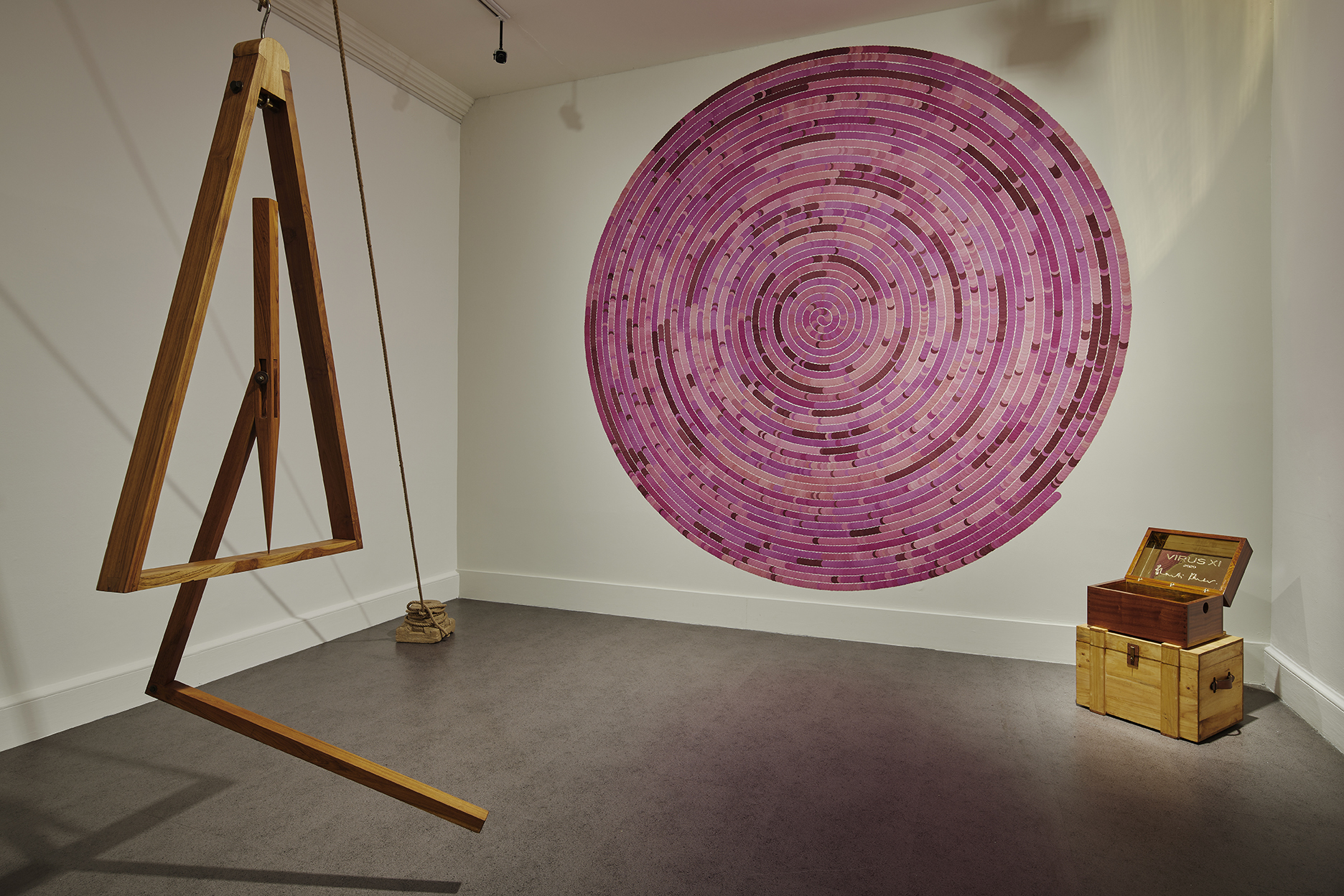