Sarah Clancy is a performance and page poet from Galway. The Truth and Other Stories (Salmon Poetry, 2014) is her third and most recently published collection of poetry, with an new book due to be published by Salmon Poetry later this year. To find out more about Sarah and her work visit: https://www.islandsedgepoetry.net/poets-a-z/sarah-clancy/ By Sarah Clancy
Fri Jul 19th, 2019 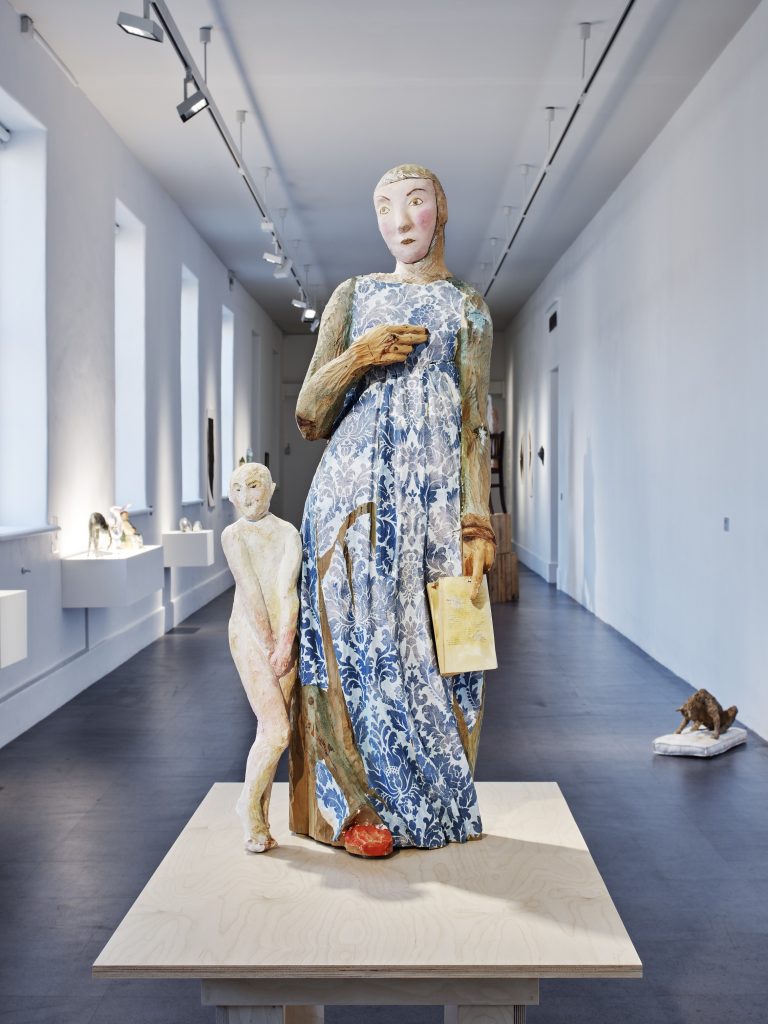 ‘Personage’ and ‘Holy Show’ are two new poems by Sarah Clancy, commissioned by IMMA and written in response to Janet Mullarney’s exhibition, ‘Then and Now: Janet Mullarney‘, 15 Feb-29 Sept 2019. ‘Personage’ relates specifically to the white child figures that feature in Janet sculptures ‘Domestic Gods I’ and ‘Domestic Gods II’, both part of the IMMA Collection, while ‘Holy Show’ responds to the exhibition more generally.

you were born from ache
and hunched up shoulders at the teenage disco
you are brim-full of unsuitable information
that no one has ears for
your skin is way too loosely fitted
and you’re lost inside it
your face can’t quite contain your features
which you are always rearranging
trying to make them fit the occasion
and always, always failing

you’re like a drawer full of odds and ends
of small denominations of defunct currencies
of needles and thread and postcards
someone wrote but never sent
you’re an assemblage of unfinished
make-and-do projects
that someone once started
you fear you aren’t worth discarding
and yet you’ve made it this far;
you were born from ache
and tomato blood blushes
and you are really something.

You set an early course for beauty knowing that all things have their own
character from the moment of creation and so your sculpted ballerinas
gorged on junk food and grew thick-waisted, your torsos sat there mutely
disrespectful and your horses were such divas they took on mule-like
aspects and every human thing you represented lost its head.

Your Madonnas refused to nurse their infants and tuned themselves
to day time television, your still-life subjects took to moving and eventually
started growing artworks of their own, to avoid any further discord you
swam into the underworld until your reason couldn’t fathom and you
couldn’t touch the bottom and you couldn’t see the shore.

You held on to any bit of flotsam that was passing and nursed it into finding
something half-remembered lost within it that had some relation to your
heart and hands, and while your materials were quite malleable their
shadows and reflections always eventually resisted and made a break for
independence that you hadn’t got it in you to prevent

and art, anyway, does what it wants and you found yourself indentured to
the undercurrents and like a stray dog licking itself in public you became
oblivious, you became its servant and that’s how we find you with your
retinue of freaks and heartbreak and mischief; an artist, in the gallery,
making an exhibition of herself.

Sarah Clancy is a performance and page poet from Galway. The Truth and Other Stories (Salmon Poetry, 2014) is her third and most recently published collection of poetry, with a new book due to be published by Salmon Poetry later this year. To find out more about Sarah and her work visit: https://www.islandsedgepoetry.net/poets-a-z/sarah-clancy/

Caoimhín Mac Giolla Léith, writer and Senior Lecturer in Modern Irish at University College Dublin, examines the work of Fergus Martin as part of the IMMA Collection: Then and Now series.

US by Helen O’Leary

Helen O’Leary’s work has been described as an un-writeable novel. Her paintings draw on the experiences she had growing up on a farm in rural Wexford in the 1960s through the 1980s. The following short story...

We invited Fionna Barber, Reader in Art History at Manchester School of Art, to respond to Gaze, the third exhibition in the IMMA Collection: Freud Project. The exhibition is concerned with the human gaze; o...

US by Helen O'Leary 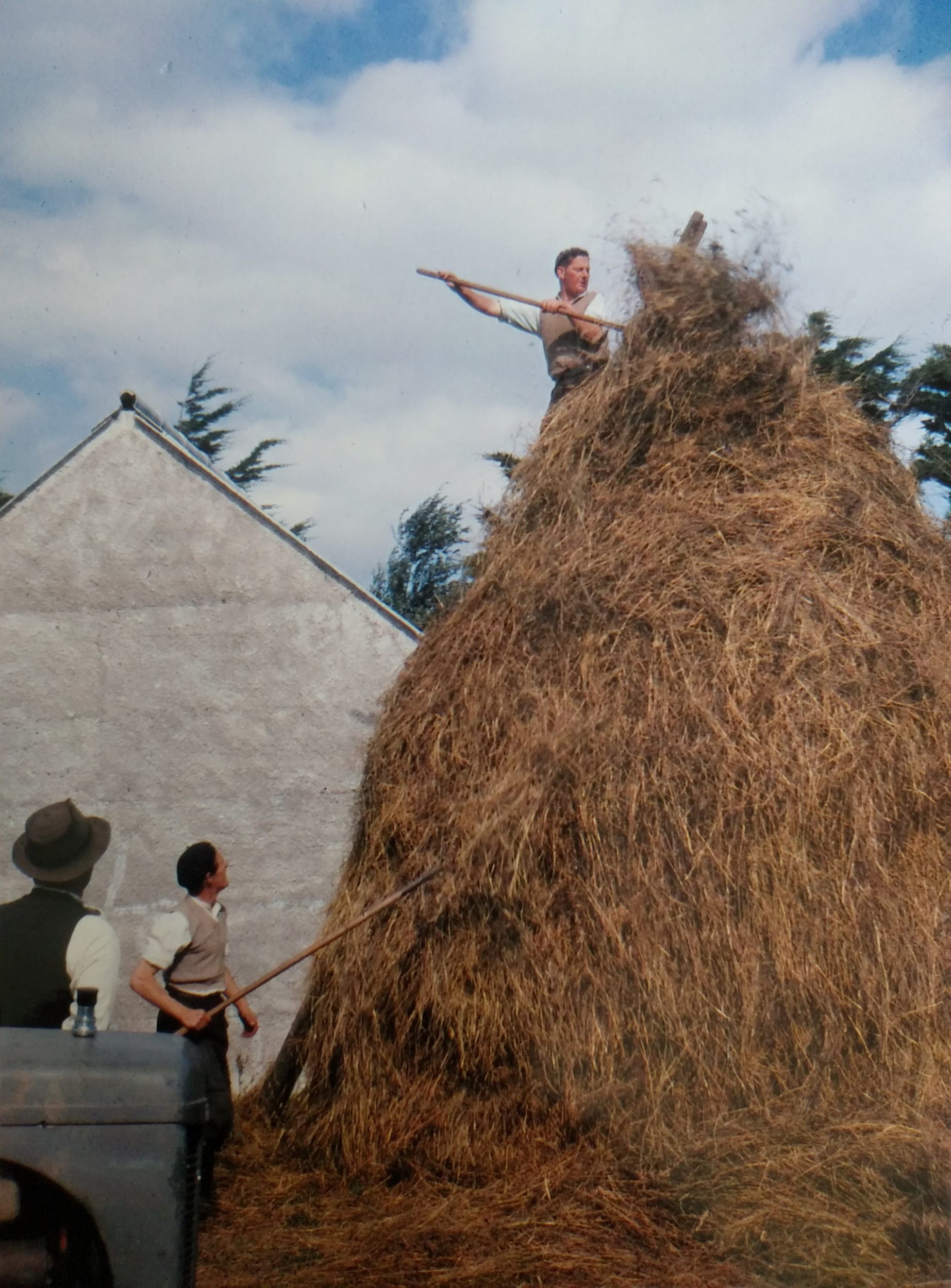 Kiliane, 1965
Helen O’Leary’s work has been described as an un-writeable novel. Her paintings draw on the experiences she had growing up on a farm in rural Wexford in the 1960s through the 1980s; “I revel in the history of painting, its rules, its beauty, its techniques, but fold them back into the agricultural language I grew up with. I’m interested in the personal, my own story, and the history of storytelling.” Two of O'Leary's paintings were acquired for the IMMA Collection in 2018: Refusal (2014), and The Problem with Adjectives (2017), which was bought with support from the Hennessy Art Fund for IMMA Collection. The following short story is O'Leary's first published piece of writing. She was awarded the prestigious American Academy in Rome Prize 2018-2019. US We had a kitchen table in Kiliane. It was half old, with a new formica top that had been added in the fifties when they married. The table held our history, the worn color where Mam made the bread, the steady geometry of where we sat, her at the head with her back to the Aga, the rest of us sitting in order of birth, my father and I nearest the door. The certainty of seating arrangements slowly expanded to the accommodation of strangers, tourists, renters with their stories of America, of lives we couldn’t imagine, tourist ...
Manage Cookie Consent
By clicking “Accept Cookies”, you agree to the storing of cookies on your device to enhance site functionality and analyse site usage.
Manage options Manage services Manage vendors Read more about these purposes
Cookie Settings
{title} {title} {title}