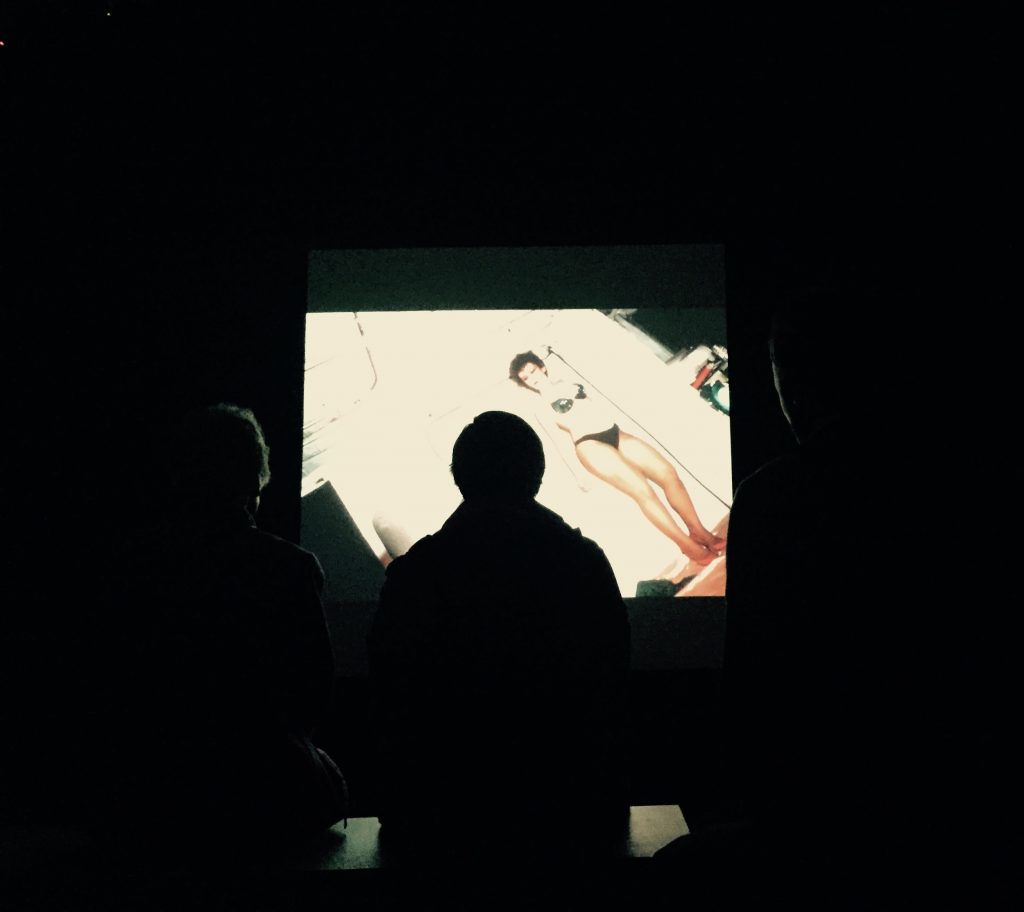 In our Gallery Voices series Ciara Magee, from our Visitor Engagement Team, explores the subject matter in American photographer Nan Goldin’s exhibition Weekend Plans. The exhibition is now in its final week ending this Sunday 15 October 2017. Admission is free.

The work of Nan Goldin is a site to behold. Her early work documents New York in the late 1970s and early 1980s at a time when artists took over the Lower East Side due to the low rents during the economic recession. Goldin moved to New York in 1978 following her graduation and almost immediately immersed herself in the ‘No Wave’ scene in which she has since become a key figure. The ‘No Wave’ movement was a short-lived scene that emerged in the late ‘70s in downtown New York that influenced a new underground art, film and music scene based on the rejection of commercial ‘new wave’ music at the time.
Goldin’s body of work demonstrates to us the gritty reality of the underbelly of the city during this time. Her Exhibition, Weekend Plans is currently showing on the West Wing at IMMA alongside Irish artist, Vivienne Dick’s exhibition 93% STARDUST. Even though both of these exhibitions are separate shows, curated with a completely different approach, that is varied in their range of media, there are similar underlying themes and many of their mutual friends become faces we recogonise seeing them multiple times in both artists works.

From the outset, the blue colour on the walls, chosen by Goldin, interjects a sombre mood as we are met with her self portraits, taken from different decades. These portraits reflect many different aspects of Goldin’s life, including the high points and the low. Her most iconic work, The Ballad of Sexual Dependency, is also featured, a 45 minute slideshow consisting of over 700 snapshots taken between 1979 and 1986, compiled with music from The Velvet Underground, James Brown and Nina Simone among others. This music gives context to the image placement in the slideshow and creates a more concrete narrative for the viewer.

The Ballad seems to entice viewers for the entire duration of the work, on a number of occasions it has provoked in depth conversations about topics such as drug use, and of course, New York City itself. A number of weeks ago a woman approached me to tell me “it’s exactly how I remember it!”, to which she elaborated that she had grown up in New York herself and was of a similar age to Goldin. We discussed how the work had generated various memories from her youth including the hardships and highlights of living in the city during a time of such poverty amongst artists. What stood out in my mind is that Goldin had actually created this piece to exhibit to her friends and peers at the time to show life as it was happening, and now many years later within a museum, the work still resonates with her peers.

This work has become iconic for its documentation of subjects that had long been recognised as ‘taboo’, such as the AIDS virus, domestic abuse and drug use. Although many other artists have also focused on these subjects, what is unique about The Ballad of Sexual Dependency is that Goldin wasn’t just documenting this life, she played an active role.

One of the faces we see cropping up again and again is that of the actress Cookie Mueller, who Goldin had been a very close friend of since they met in 1976 and who she stated was “the most fabulous woman I’d ever seen”. The slideshow finishes with an image of Mueller at her husband Virrorio Scarpati’s funeral followed two months later by her own open casket after her death from the AIDS virus in 1989.

Also featured within this exhibition are sixteen rarely seen drawings by Goldin which she has created in recent years; and a series of photographs taken in Ireland during two of her visits, in 1979 and 2002, which have never been on display before.

Displayed in the adjoining room to these images is a room entirely dedicated to Vivienne Dick and her son, Jesse. We see images taken over a long period of time and in many different places, from New York, to London and right here in Dublin. This work displays the close friendship both artists have shared with one another since their first meeting on Thanksgiving in 1978, shortly after Goldin had moved to New York.

By Ciara Magee – Visitor Engagement Team, IMMA.
This exhibition runs concurrently with Vivienne Dick’s exhibition 93% STARDUST which is also in its final week ending this Sunday 15 October 2017. Admission to both exhibitions is free. 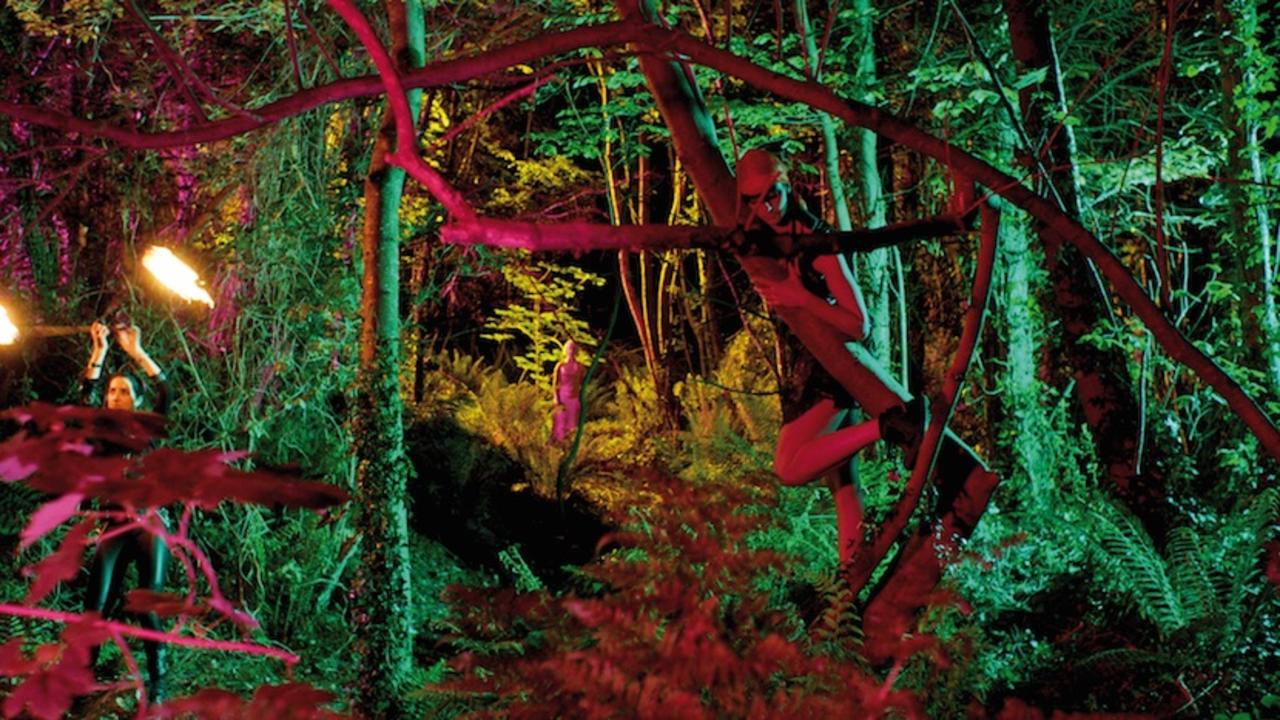 Continuing our Gallery Voices series Paola Catizone from our Visitor Engagement Team, explores audience responses to the current solo exhibition from Irish artist Vivienne Dick.  The exhibition ends on Sunday 15 October. Admission is free. “The web of meaning unravels, and a new one is spun in its place” Homo Deus: A Brief History of Tomorrow -Yuval Noah Harari 93% STARDUST, by internationally celebrated film maker and artist Vivienne Dick is a solo exhibition currently showing at IMMA and presented alongside Weekend Plans, by her life long friend and collaborator photographer Nan Goldin. As a member of IMMA’s Visitor Engagement Team, I am in an interesting “fly on the wall” situation which allows me to notice visitor’s responses to the work. With Nan Golden and Vivienne Dick’s exhibitions VET members are experimenting with a new “roaming” approach which allows us to move freely through the gallery and to engage with the public as it seems appropriate. Nan’s show running smoothly into Vivienne’s, with Goldin's last two rooms dedicated to portraits of a young Vivienne and her son, reflects the merging of individualities and the interest in friendship that was central to both artist’s work. Visitors are at times unsure as to where one artist’s show ends and the other’s beg...
Manage Cookie Consent
By clicking “Accept Cookies”, you agree to the storing of cookies on your device to enhance site functionality and analyse site usage.
Manage options Manage services Manage vendors Read more about these purposes
Cookie Settings
{title} {title} {title}