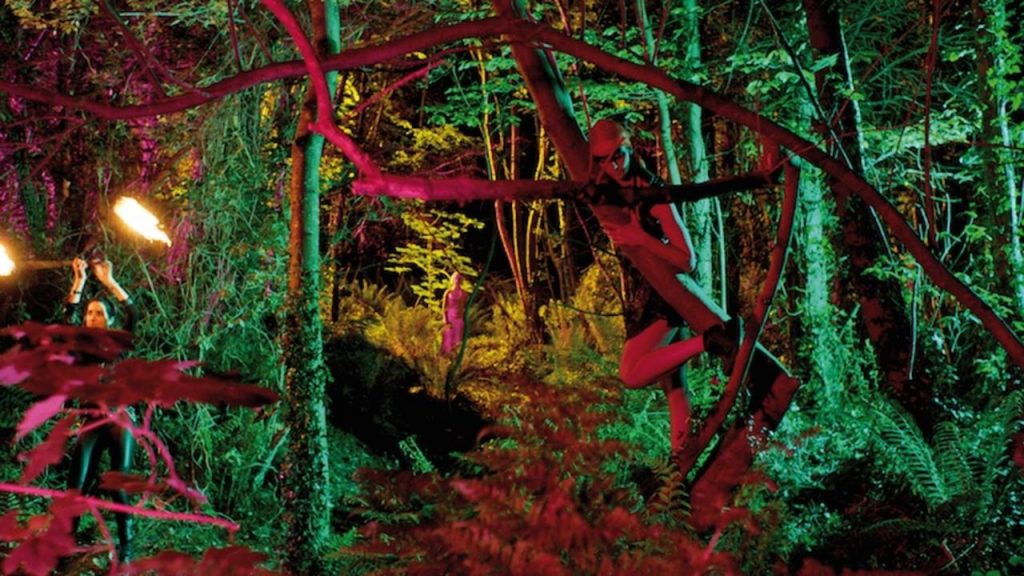 “The web of meaning unravels, and a new one is spun in its place”

93% STARDUST, by internationally celebrated film maker and artist Vivienne Dick is a solo exhibition currently showing at IMMA and presented alongside Weekend Plans, by her life long friend and collaborator photographer Nan Goldin. As a member of IMMA’s Visitor Engagement Team, I am in an interesting “fly on the wall” situation which allows me to notice visitor’s responses to the work. With Nan Golden and Vivienne Dick’s exhibitions VET members are experimenting with a new “roaming” approach which allows us to move freely through the gallery and to engage with the public as it seems appropriate. Nan’s show running smoothly into Vivienne’s, with Goldin’s last two rooms dedicated to portraits of a young Vivienne and her son, reflects the merging of individualities and the interest in friendship that was central to both artist’s work. Visitors are at times unsure as to where one artist’s show ends and the other’s begin.

Even though the the thematic in the two artist’s work has much in common, as they have influenced each other through their lives, once they enter the darkened, carpeted, cinematic spaces of Dick’s exhibition, viewers seem to relax into a quieter mood. There is a subtlety of ideas woven into the often raw images and sounds which allows for a reflective atmosphere.

Visitors often return to the exhibition to complete viewing of all the films, which range between 5 and 48 minutes in duration. Dick has built an immersive space throughout the viewing area, including a “Quiet Room”, a convivial space which includes antique furniture previously used in the videos, a book shelf (visitors can read but the artist confided that she had cast a curse on each book to prevent them being stolen!) and a water dispenser. Conviviality does result, and the public can often be found chatting, discussing the exhibition or, in the darker projection rooms, sitting comfortably on a sofa, absorbed in the screening. The show of course doesn’t appeal to everyone, as the punk aesthetic of the artist’s early work and the experimentation of her recent films may not speak to all viewers. Chatting to the staff however often gives context and brings to life art works that may initially seem difficult to relate to, so don’t hesitate to ask!  The following is a short introduction to the artist, her ideas and her work.

Vivienne Dick was born in Donegal in 1950, and, after a period of global travelling, she settled in New York’s Lower East Side in the late 70s, arriving on the scene with her camera and without formal photographic or film training and quickly becoming involved with the explosion of experimentation and transgression that was the ‘no wave’ movement. Initiated by musicians that experimented with sound and noise, no wave was inspired by Punk aesthetics. Part time work and cheap rents were attracting young artists to New York, and “Art bands” were springing up. Artists and their friends shared accommodation and collaborated. Dick was listening to Lydia Lunch and Teenage Jesus, The Contortions and Pat Place and spending a great deal of time at the Anthology Film Archives.  The works of filmmakers like Maya Deren, Ken Jacobs and Jack Smith and female musicians like Meredith Monk made a lasting impact on the young artist .

Witnessing women like Lydia Lunch leading her band rather than taking a secondary role was new and empowering and led to the production of rigorously gendered films that questioned the role of women in the world. Punk culture and the New York experience were liberating catalysts to the emergence of a body of work that had documentary elements, with her Super 8 trash films being  screened in bars and clubs alongside punk bands and performances. An interest in people and a desire to document the scene, manifested in an organic, unscripted and lightly directed style of working, with plenty of room for improvisation. Power relations, women’s experience of prostitution and of patriarchal rule, as well as late capitalism and globalisation were some of the themes explored in Dick’s  gritty Super 8 works from the late 70’s and early 80’s. Classics of this time including; She Had Her Gun All Ready and Guerrillere Talks are presented in the first section of the exhibition at IMMA.

With a return to  Ireland in 1982, an explicit political tone entered Dick’s films.

She moved back to London in the mid 80s, where she was actively involved in the London Filmmakers Coop. On returning to Ireland in the mid 90s, her study of archaeology and prehistory shed a new, mythical light on Irish landscape. Rediscovery of a goddess cult still alive in the names of Irish geographical sites prompted reflections on the centrality of the male and the otherness of women in monotheistic religions. The reading of linguist, psychoanalyst and philosopher Luce Irigaray’s work highlighted the “othering” of women in society and the deeply rooted belief in the supremacy of the white male at the basis of our culture. In a 2014 interview for the LSFF Dick stated: “Woman is the primordial Other, but otherness can be displaced in colonialism, and war, and through cast and class. We have to find a new way of relating to the other which is not based on dominance and brute force”.

The Irreducible Difference of The other (2013), Reed Moon Rising (2015) and Augenblick (2017), occupy the second section of the exhibition. In The Irreducible…, the earlier theme of power roles within sexual relationships so visible in She held Her Gun All Ready (1978), expands with a series of meditations on social, global and ecological power struggles through a patchwork of images juxtaposing different times, places and characters. The apparent fragmentation of images can reveal a unifying web of being, weaving multiple cultural, personal and temporal spheres. A deep inter-dependence of all life is presented as the antidote to the fear of difference. Franco-Irish actress Olwen Fouere powerfully inhabits the personas of Antonin Artaud and and Russian poet Anna Akhmatova.

Red Moon Rising is a carnivalesque exploration of elemental nature, the imaginal realm and femininity. Female performers engage in movement and voice improvisations that move beyond conventional rules of communication, and question the validity of language as an adequate carrier of experience. Nature appears sublime, and delicate black and white imagery rhythmically punctuates wildly-lit coloured settings.

Augenblick (pictured at the top) is a meditation on age, and the evolution from a mythological to a human and then to a technologically centered world.

The film features three actresses, a trinity of female ages, and quotes literary and philosophical sources from Rousseau to Noah Harari.
The quiet room is the last section of the show and it contains reading materials, a sitting room environment and Felis Catus, a humorous, but reflective, short film with an impressive soundtrack.

A new era in which humans are no longer placed at the centre of the universe is envisioned in this work, echoing current concerns in art, philosophy and life.

Vivienne Dick lives and works in Dublin. 93% STARDUST is on show in IMMA until Sunday 15 October 2017.

Understanding Hilma. A life dedicated to spirituality in art 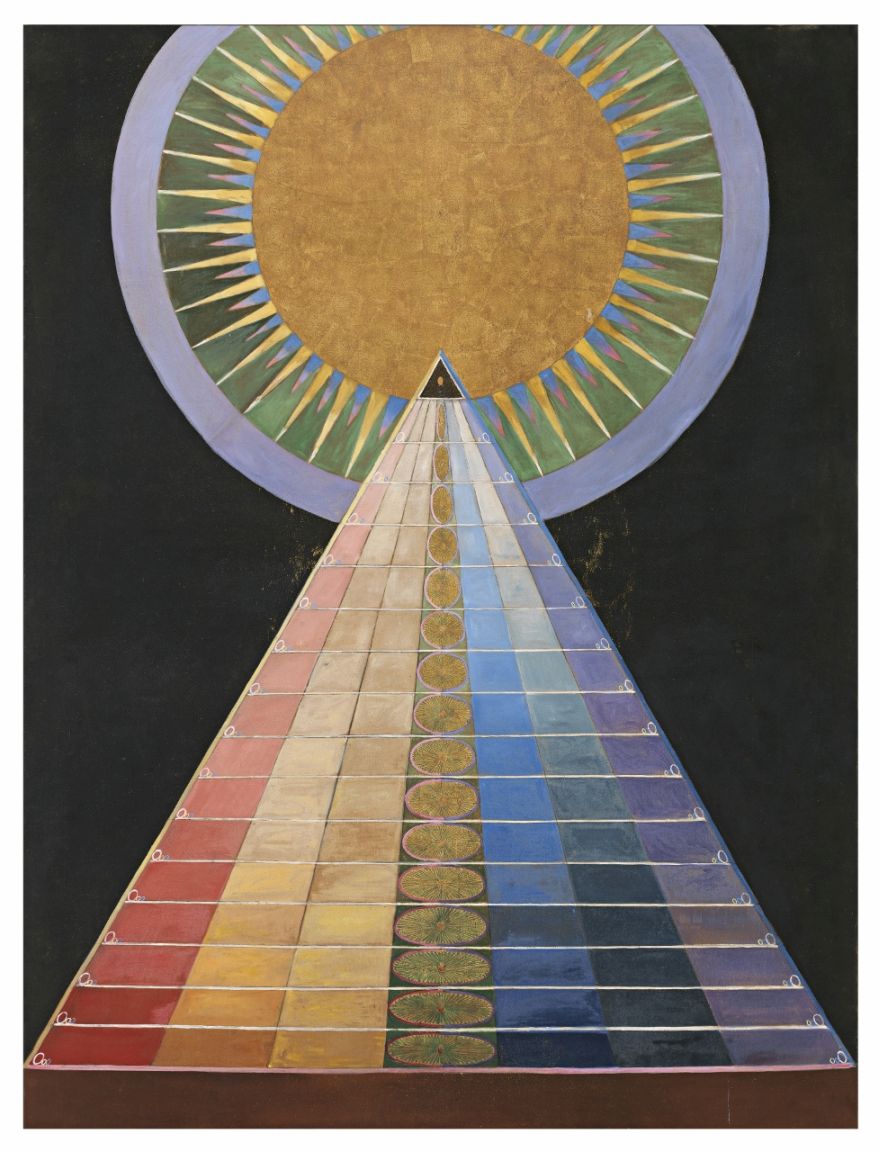 Hilma af Klint, Altarpiece, No 1, Group X, Series Altarpieces, 1915 , Oil and metal leaf on canvas, Photo: Albin Dahlström / Moderna Museet
By Leda Scully, Visitor Engagement Team, IMMA. ‘But no, she’s abstract, is a bird Of sound in the air of air soaring, And her soul sings unencumbered Because the song’s what makes her sing.’ Fernando Pessoa At the time of her death, the Swedish artist and mystic Hilma af Klint (1862 - 1944) left behind a body of work comprising 1,200 paintings, numerous sketchbooks and 26,000 pages of journals. She stipulated in her will that the work should not be seen for twenty years after her death, but in fact it was forty-two years before it was exhibited for the first time, in the 1986 show The Spiritual in Art: Abstract Painting 1890 - 1985, curated by Maurice Tuchman in L.A . Record numbers attended that show and audiences were reportedly stunned by this unheard-of Swedish painter whose work had remained unseen for so long, and who, it transpired, may have painted the first ever abstract paintings in Western art - quite a few years before Kandinsky. This is the second time Hilma af Klint’s work has been shown in IMMA . The first was in the landmark travelling show ‘3x Abstraction,’ which drew parallels between her and two other key female abstract artists - Emma Kunz and Agnes Martin . In 2005, John Hutchinson also curated a show of her work in Dublin for the Dougla...
Manage Cookie Consent
By clicking “Accept Cookies”, you agree to the storing of cookies on your device to enhance site functionality and analyse site usage.
Manage options Manage services Manage vendors Read more about these purposes
Cookie Settings
{title} {title} {title}