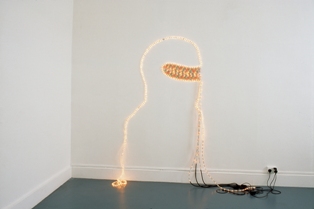 Seas, Sees, Seize, shows aspects of the current developments of Vanessa O’Reilly’s work in sound, drawing and sculpture. Through the amalgamation of the diverse forms and strategies within her work Vanessa O’Reilly encourages an open-ended non-didactic practice. Much of the work’s contingency relies on the systems inherent in scenario: an imagined sequence of possible events. The strategy of scenario is explored through documentation and fiction in both the work’s inner collective workings/elements and in its presentation. This requires a particular interpretive flexibility from the viewer and for O’Reilly’s part the presentation of the maximum possible interaction
between the processes.

Cyclops is a shift from previous text based rope-light works, hybrids, negotiating between the position of sign and
language.

Now and Forever Original 12” Mix, recorded performance 25 mins.
It is the process of how these sounds are arrived at as much as what they sound like that is important. In actuality the sound heard is a techno vinyl record played manually in staccato to imitate a firework display. What is presented is not a representation of the song but a poetics, in the ancient sense of poiesis: a movement of coming into thought, of the process of making, of creating. O’Reilly first began this feux d’artifice (firework) series in 2003, works have varied to included live performances and recordings of O’Reilly using her voice to impersonate a firework display to a programmed (disco)-light display.

Vanessa O’Reilly’s previous works have been made in video, sound, performance, photography, drawing and sculpture and have predominantly been presented in site/context specific situations and installations. O’Reilly’s strategy has been a careful contemplation of the potent conjunction of form and idea stored in the work. She has exhibited in the Havana Biennale, Cuba 2003 / Eurojet Futures, RHA, Dublin 2002, 2005 / Turin Biennale 2000/ Kunstfabrik, Berlin, 2000/ EV+A 2001, 2002 and 2004 / Temple Bar Gallery & Studios 2004 / Pallas Heights 2006. In 2002 she had her first UK solo exhibition, PREMISES at Milch Gallery London.