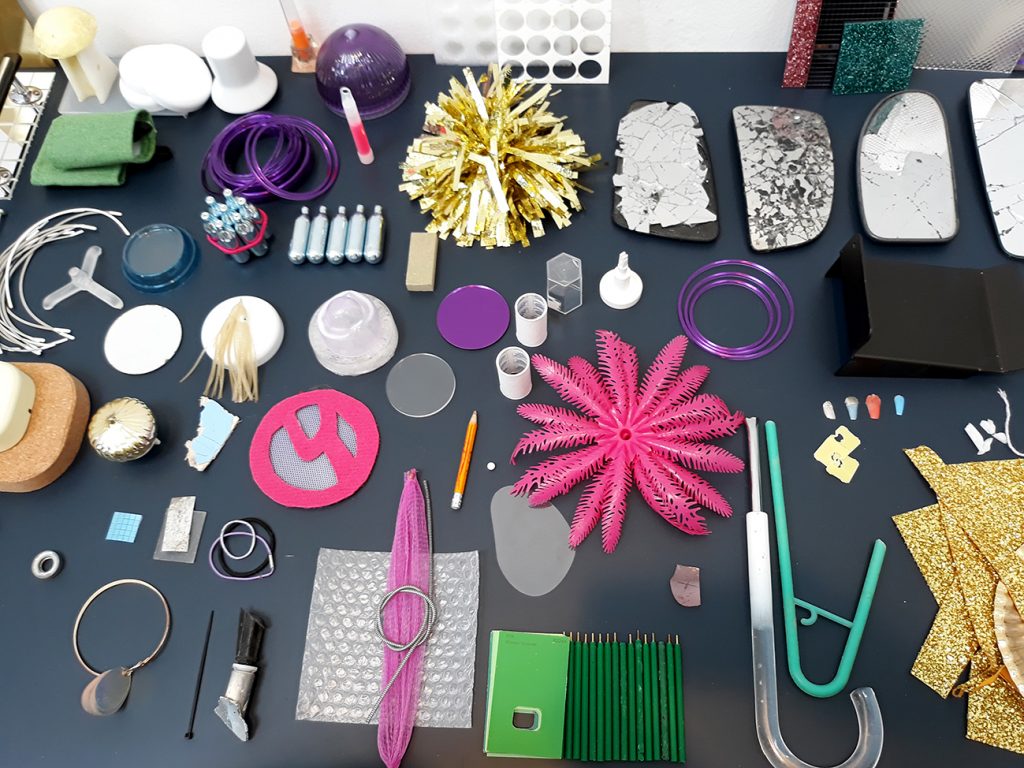 SPEAKING STUDIOS talks directly with IMMA Residents about the role of the studio, the conditions of making, researching or engaging with art and a chance to find out a bit more about what makes them tick.

Late on the evening of Thursday 11 April 2019 Suzanne O’Haire turned right to enter IMMA’s driveway, her car stuffed with a home and studio survival kit, coming from Brighton Suzanne was just off the ferry to join IMMA’s Residency for the following four months. No time was wasted in getting started as Suzanne pushed her practice to grow and expand over the coming months. Her spark was contagious with fellow residents, IMMA staff and museum visitors; always ready to explore, have a chat and get out and about to see and experience all that was on offer. Suzanne was occasionally referred to as the resident Flâneur, as a walk down the street would involve constant surveillance and discussion of her immediate surroundings accompanied by a regular swoop to the ground to yield another piece of street treasure to be admired and popped in to one of her many pockets, later it would be added to a growing collection in the studio, stuff to be ordered, sorted, tried and tested, challenging it to find its place:

A studio visit with Suzanne was never a brief encounter, her enthusiasm to discuss art and influences drew visitors in to her world of creativity. Towards the end of her stay Suzanne brought her studio series manic panic out to IMMA’s iconic courtyard to explore its engagement with space and scale, capturing the works conjuring capabilities, playing with placement and documenting the series in-situ. Harnessing this moment brought Suzanne full circle with her original objectives when she applied to the residency, to push her practice outside its safe parameters, to expand, absorb and respond in new contexts, and with a name like O’Haire she was finding a bit of herself along the way.

What is the role of a studio, is it important to your practice?

My studio is my sanctuary where I surround myself with all manner of stuff. It’s often quite a solitary space/activity and removing myself from the other/outside allows things to happen. Stepping away from my established studio (a fraction of the size of the studio at IMMA) to a neutral/different space was quite disorientating at the start (this was my first ever residency), but I was surprised by how quickly I managed to make the space my own and what these shifts enabled.

How would you describe your studio?

At IMMA…huge! I had many table tops with objects and matter laid out. Some areas were just source materials and then there were areas where I built work. To others it seems orderly, but to me it is disruptive, even chaotic. Often there are endless options, but nothing’s quite right, so I need to constantly reorder and put things away or take them out again. I have shelves of books and every day I try to read something. I panic that I’ll never have enough time in my life to read all I should, and I’m a slow reader – this doesn’t help. On my desk is my beloved iMac where I research for hours on end, at the moment I’m trying to track down a rare book that’s the basis of a piece I’m working on. On the wall, I have fragments of work that may or may not become something else, and all sorts of ephemera, postcards, things friends have sent to me, stuff I’ve picked up off the street…so much stuff!

What do you enjoy most about making art?

That I’m my own boss and never quite know what lies ahead, though it’s a thin line between these flipping from best to worst. I’ve always juggled other roles alongside my studio, but fortunately within recent years I’ve managed to focus most of my time in the studio. It’s odd considering this question as I only know being this way, doing the things I do, so it feels how it should be. I’m aware that I’m very lucky to do what I need to do – I say need because it’s not always a joyous or easy pursuit.

And what frustrates you most?

Ha, that I’m my own boss and never quite know what lies ahead! And making new work, this always feels somewhat daunting as I dread repeating the essence of previous work, I always have to feel it’s going somewhere else. Also, working with restricted finances and facilities can be limiting, but this can mean you become pretty resourceful too.

What pleases you more, the process or the product of making art?

For me it’s all about the process, something happens while I make work, a means of shifting or filtering stuff. The moment a work is finished I’m done. Saying that, I recognise that the work can open up an exchange or dialogue with others, it can activate something else, and when it does that pleases me no end. I had many studio visits at IMMA, which were so helpful – the curiosity and reflections of others are a fascination to me.

If you could select artworks from IMMA’s Collection to exhibit with your work what would it be and how would you do this?

I’m interested in the conversations that could occur between these pieces and my work. I imagine taking them off-site, toying with a location such as Loftus House in Wexford, supposedly one of Ireland’s most haunted buildings. I’m drawn to places that hold a certain edginess, a sense of being in limbo, and Loftus Hall definitely has a liminal presence.

I caught the Walker and Walker exhibition Nowhere without no(w) at the start of my residency which was great, especially their film Mount Analogue Revisited. I’ve even started reading Rene Daumal’s book that the film takes prompt from. The interaction between the characters and the unfolding tale of their journey is just brilliant. You’re never entirely sure of the outcome of their Utopian quest, whether their voyage has been a success. I’ve since watched it again and again, it’s that good.

If you could visit any artist in their studio who would it be?

Again, hard to nail down to just one. This is more of an experience/environment, but I’d love to have been amongst all the tutors/students at the Bauhaus, imagine that, those costumes, the parties! On second thought, I’m tempted to take this out as the actual reality was somewhat limited for women, most activity directed to just weaving…grrrr. Spending time with Fluxus, Hilma af Klint, Eva Hesse, Ithell Colquhoun or Suzanne Treister, that would be mind-blowing, incredible visionaries whose works continually reveal more and more. Oh, I have a crush on Ron Nagle’s work too, he’d be fun to hook up with. I loved chatting to fellow IMMA residents in their studios and other artists in their spaces in Dublin – it’s always an honour and a joy to step into someone else’s creative mind and see where a conversation may go.

I’m afraid nothing unusual or impressive. But it’s always in my head, it is my head. I don’t see myself as doing or not doing art, it’s not a separate part of me or my life. I really don’t want to sound pretentious, but if I go walking, visit places, see a film or hook up with friends it’s never switched off, it’s not something I can switch on and off. I don’t think any creative mind does or can. Please, say that’s not pretentious! 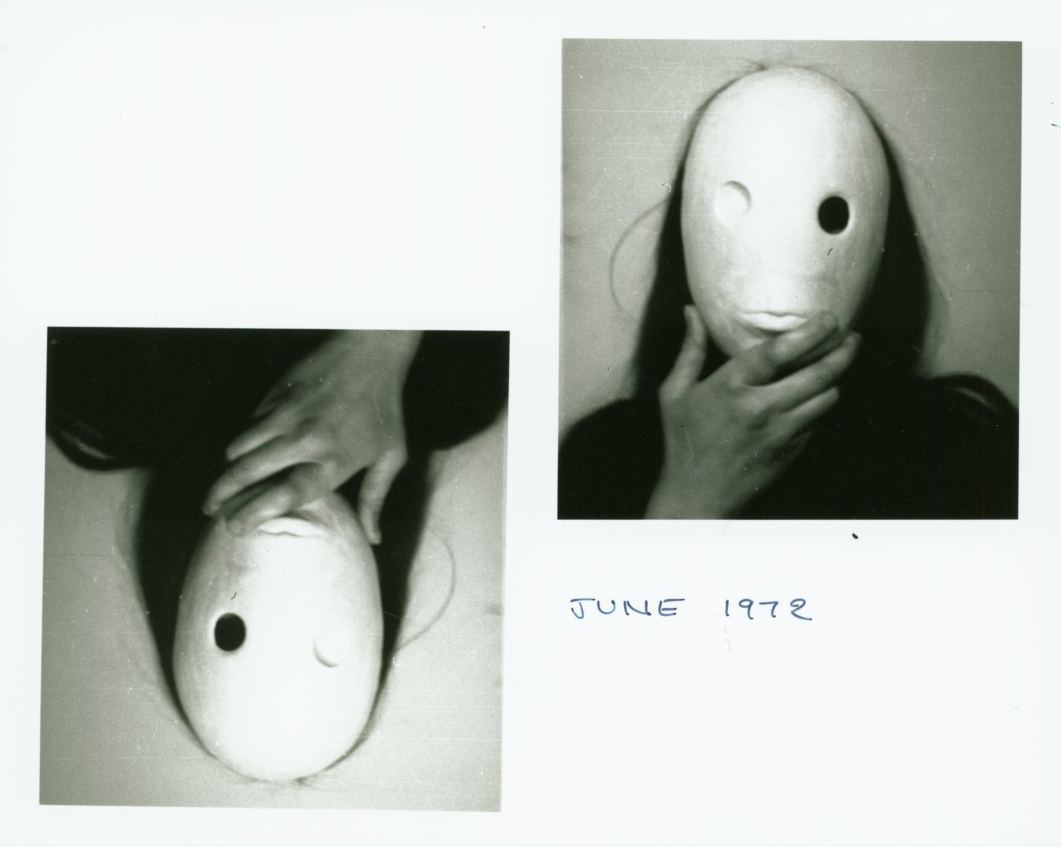 Mary Farl Powers, June 1972, photograph from the archive of the Irish Museum of Modern Art
[caption id="attachment_42169" align="alignnone" width="766"] Mary Farl Powers, Mask Head 1, 1973, Monochrome etching, 30.5 x 25 cm, Collection Irish Museum of Modern Art, Donation, Powers Family, 2009[/caption] The original catalogue from Mary Farl Powers’ posthumous exhibition at IMMA in 1995 has been digitised and is now available to read below. The re-publication of this book, which contains rare writings on Powers’ work, coincides with the current  display of a selection of her works from the IMMA Collection in the exhibition A Fiction Close to Reality (running until 14 October 2019). You can download the pdf here or read the introduction and essays below. The catalogue, now many years out of print, features two essays written by the late artist’s sister, the writer Katherine A. Powers and art critic Aidan Dunne on the occasion of her 1995 solo exhibition. In different ways, both writers provide thoughtful and intriguing  insight into her life and work and augment her legacy as one of the most influential printmakers in Ireland. An introductory foreword by curator of the exhibition Brenda McParland reinforces the importance of her work to IMMA. In 2009, the Powers family generously donated over 50 works by Mary to the IMMA Collection, a selection of these ...
Manage Cookie Consent
By clicking “Accept Cookies”, you agree to the storing of cookies on your device to enhance site functionality and analyse site usage.
Manage options Manage services Manage vendors Read more about these purposes
Cookie Settings
{title} {title} {title}