Sean Lynch’s artworks frequently investigate the narratives of architecture and its everyday realities.  His research and installations disclose and build upon fragile stories and objects that he finds, often magnifying traces of an often-idiosyncratic existence. 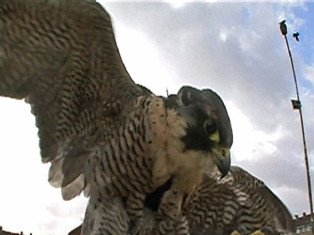 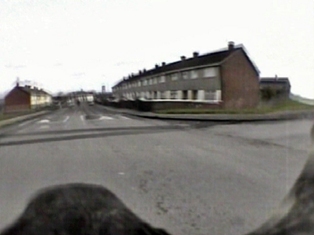 In 2008, he introduced three peregrine falcons to the Moyross housing estate in Limerick.  Moyross was developed between 1973 and 1987 on the edge of the city, comprising of 1,160 houses, divided into 12 parks.  Although the population has decreased in recent years, it still stands in excess of 4,000 people, 50% of which are under the age of 24.  Employment stands at 21%.  In recent years, petrol bomb attacks and various gun-related incidents have gained much attention in the Irish media.  Recently Limerick City Council announced their vision for the area, intending to demolish the entire estate and rebuild it on a smaller site.  Large green areas between individual parks will disappear, places that the city council blame for the socially-disenfranchised character of the area.

Peregrine falcons, the fastest creature in the world, were once populous around the west of Ireland, before the use of pesticides in the 1960s made them an endangered species.  In March 2008 three falcons were introduced to the Moyross area, with miniature video cameras attached to their bodies.  Their free flights over the troubled estate record a place about to disappear under the failed agendas of urban planning.

Sean Lynch was born in Kerry in 1978.  He studied history at the University of Limerick and fine art at the Stadelschule in Frankfurt.  His solo exhibition, Recent Finds, runs at the Gallery of Photography in Temple Bar until November 9.  A year-long commission is currently on show on the facade of the National Sculptural Factory, Cork.  Lynch has also completed solo exhibitions at Heaven’s Full, London (2008), Galway Arts Centre (2007), Limerick City Gallery of Art (2007), and has featured in recent group exhibitions at the Lewis Glucksman Gallery, Cork and Office Baroque, Antwerp.  Recently he was awarded the 2009 Banff Residency by the Arts Council.

For a printable version of this information please download the following documentSean Lynch: The Process Room (Word doc 2000 – 28KB)