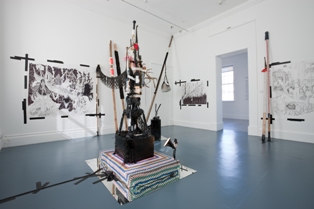 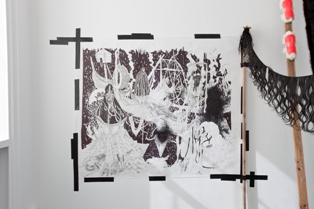 A German curator recently called Jonas Liveröd’s work "dirty baroque" which doesnt sound far-fetched when viewing his process room show, Crap monument, wrong message. Maybe it is all in there; religious cults, love crimes, dictatorial architecture, pilgrimages, anomaly taxidermy, misplaced art history, fetish collectors, folklore fakes, disbanded hippy communes, sideshow science, mind-boggling drugs and black(ish) magic. Liveröd is fascinated by intense manic states with its hopes and failures, and the distorted energy that can come from this. His work method is intense, direct and very immediate. He conceives the pieces simultaneously through the physical making of them, intertwining saturated iconography and thriving on the edge of possible failure. Rather than letting the spectator view the work from a distance, upon stepping into the space, viewers are surrounded by the work on all levels. Immensely detailed, a sense of dark, twisted psychedelia fills the fragile sculptures and the large-scale drawings.

Jonas Liveröd (1974) lives and works in Malmö, Sweden. Since graduating from the Academy of Fine Arts in the Netherlands in 1999, Liveröd has been active on the international art-scene. He is currently involved in an ongoing project entitled Permanent daylight. The project includes two publications and a series of solo exhibitions at museums and galleries throughout Europe. The first publication, The Violence, was released in autumn 2008 at Pool Gallery, Berlin. He is invited as guest curator at Stavanger Centre of Art, Norway in 2010. Recent exhibitions in 2008-09 include: Ystad Museum of Art, Sweden; Kristinehamn Museum of Art, Sweden; Field Museum, USA; Pool Gallery, Germany; Nordin Gallery, Sweden; Växjö Konsthall, Sweden; Aarhus Center for Contemporary Art, Denmark and Alma Löv Museum, Sweden. Further information can be found at www.jonasliverod.com