Aoife Collins: There is no Release My Darling The Process Room

Aoife Collins's exhibition in the Process Room revolves around appropriated commonplace mass-produced objects and images which have been altered, manipulated or copied.

Itching in a cage where dandies have left their shuttlecocks

Aoife Collins’s exhibition in the Process Room revolves around appropriated commonplace mass-produced objects and images which have been altered, manipulated or copied. There is no Release My Darling presents a selection of mixed media works which have been developed over the duration of being an artist in residence at the Irish Museum of Modern Art.

The works focus on fragmentation and destruction, the to-ing and fro-ing between the definite and infinite. Close attention is given to the ability of objects to role-play. This use of role-play or mutability, away from intended functionality, is an attempt to open up the realm of possibility or potentiality of the objects and materials explored. A great deal of the work consists of re-assemblage; form and function are not considered final but rather can be altered and are open to the suggestion of permutations. Much of the work looks towards a form of breakdown or collapse with the images or associated meanings melting away. The exhibition can also be seen as an exploration of artistic prototypes such as monochromatic painting, bronze sculpture and the propagation of pattern. Notions of background and foreground or an exploration of the dominant and submissive image on a simultaneous picture plane are themes which are approached in the works.

Aoife Collins interdisciplinary practice explores the transience and mutability of objects, ideas and public personas, especially the filtering down from ‘highbrow’ to popular culture and the inherent changes of form and meaning that occur in these circumstances. View Artist 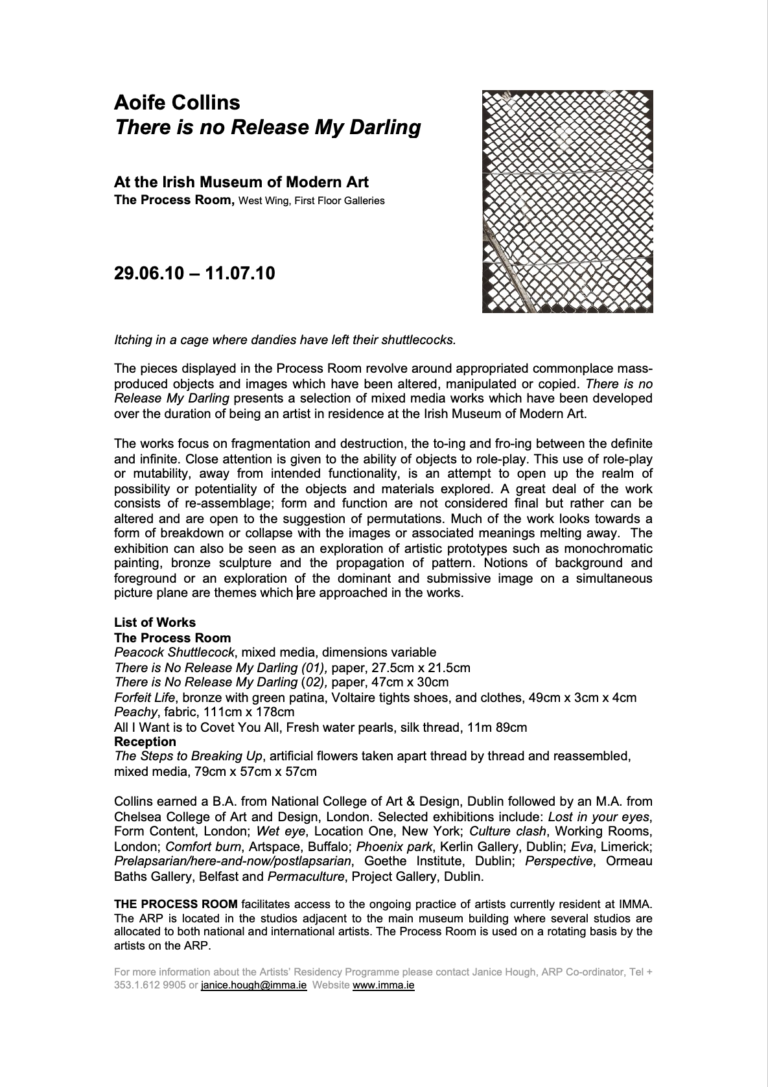