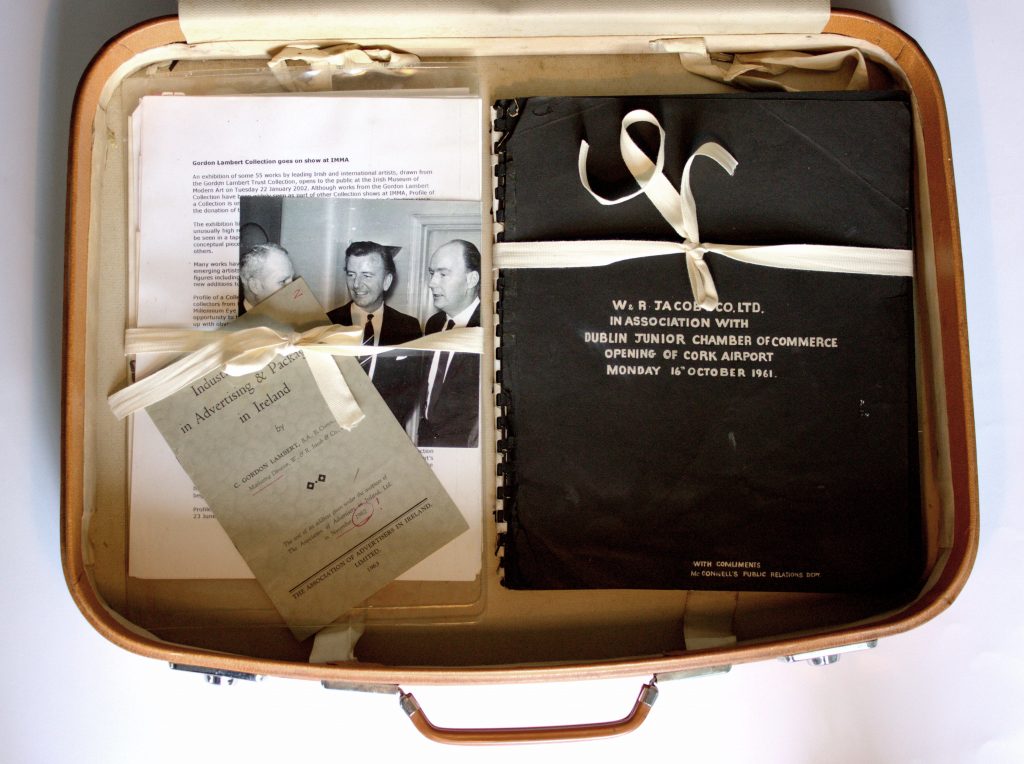 In the first of two blogs Ciara Ball introduces Gordon Lambert and his life as a collector and art lover before a selection of material from his archive goes on display for National Heritage Week. Ciara Ball is a Member of IMMA’s Visitor Engagement Team. Ciara is working with Nuria Carballeira, Assistant Curator of IMMA’s Collections Department on the Gordon Lambert Archive, IMMA’s first significant archive project funded with help from The Heritage Council.

Gordon Lambert was one of the first and most generous supporters of IMMA since the campaign for its creation began in the late 1980s. His private collection of over 300 artworks was gifted in stages to the IMMA Collection following its opening in 1991 and includes many well-loved pieces now familiar to our regular visitors. Since 2005 IMMA has also held Gordon’s expansive art library and archive containing letters, cards, photographs, printed material and ephemera collected over six decades. With the help of a grant from the Heritage Council we have now begun the absorbing task of cataloguing this fascinating resource.

Gordon Lambert studied accounting at Trinity College, Dublin. In 1944 he entered the biscuit manufacturing firm W&R Jacob and began a lifelong career in which he would serve the company as Chief Accountant, Marketing Director, Managing Director and finally Chairman from 1977. It was also in the 1940’s that Gordon met Cecil King who in turn introduced him to a large circle of artists and gallerists, many of whom were to become friends and contributors to his budding collection. Meetings in the Robt. Roberts Cáfe on Grafton Street led to soirées at King’s Pembroke Road home and acquaintance with an artistic circle including Oliver Dowling, Patrick Hennessy, Henry Robertson Craig and gallerist David Hendriks.

Gordon bought his first painting Pont du Carrousel (1954) by Barbara Warren in 1954. This was followed by Aperitif (c.1956) by Henry Robertson Craig and Patrick Hennessy’s Boy and Seagull (c.1954), recently included in the very popular exhibition Patrick Hennessy: De Profundis. During the 1960s he continued to support Irish artists while also adding significant international names to his collection. The many friends who congregated in his Rathfarnham homeconversed and relaxed amid works by Jesús Rafael Soto, François Morellet, Carlos Cruz-Diez, Jean Arp, Valerio Adami and Gordon’s  own favourite Victor Vasarely. His talent as a host as well as a collector is conveyed through the numerous thank you letters and return invitations scattered throughout the archive.

Not content with just the building of his private collection, by the 1970s Gordon was an active campaigner for both the arts in Ireland and the promotion of Irish art and culture abroad. While Irish people were wondering “ how they got the figs into the fig rolls” he petitioned statesmen and politicians, sponsored exhibitions of emerging artists and showed his own collection in the Municipal Gallery of Modern Art and the Cork Arts Society Gallery. He was involved with the Contemporary Irish Arts Society, the Dublin Theatre Festival and the National Ballet and served on the boards of The National Gallery of Ireland, The Arts Council of Northern Ireland and the International Jury at Cagnes Sur Mer. Despite appointments to the Senate in 1979 and the International Council of MoMA in 1980 he still had time to scoop a nomination for Ireland’s best dressed man in 1981.

The Gordon Lambert archive reveals evidence of how the worlds of business, art, philanthropy and friendship entwined, making it a fascinating record of a life of achievement and enjoyment. We hope it will also become a valuable resource for the greater understanding of the recent history of Ireland’s cultural life.

As part of this year’s National Heritage Week a selection of material from the archive will be on display in the West Wing First Floor Gallery from Tuesday 23rd until Sunday 28th of August. All are welcome to an introductory talk in the space on Tuesday morning at 10.30 am followed by tea and Jacob’s biscuits. Please see the Heritage Week website for further details. 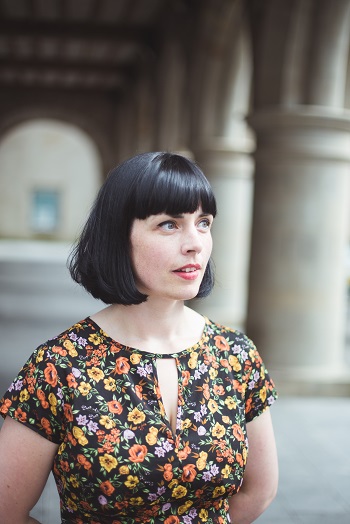 Doireann Ní Ghríofa
Doireann Ní Ghríofa is a bilingual writer working both in Irish and English. She frequently participates in cross-disciplinary collaborations, fusing poetry with film, dance, music, and visual art. We are delighted to be able to publish, for the first time, a new work by Doireann written in response to the current retrospective of Carol Rama here at IMMA (closing 1 Aug 2016). Doireann introduces the work below, and the poem follows.   [caption id="attachment_2140" align="alignnone" width="5497"] Pictured here on the far right is Carol Rama, L'isola degli occhi (The Island of Eyes), 1967, Plastic eyes, synthetic resin and enamel on canvas, 120 x 160 cm, Private Collection, Installation view at IMMA, photo Denis Mortell.[/caption] An Island of Eyes A first encounter with the work of Carol Rama is a shock, a visceral jolt, an astonishment. As I walked through IMMA’s retrospective of Carol Rama’s life work, I was reminded of a quote by Philip Larkin– “Poetry is nobody's business except the poet's, and everybody else can f*** off.” Plucky and boisterous as she was (and no stranger to poetry herself), I feel that Carol Rama would have enjoyed this quote as applied to her art, in fact I can almost imagine the spark in her eye, her hoarse chuckle. Yet despite the i...
Manage Cookie Consent
By clicking “Accept Cookies”, you agree to the storing of cookies on your device to enhance site functionality and analyse site usage.
Manage options Manage services Manage vendors Read more about these purposes
Cookie Settings
{title} {title} {title}