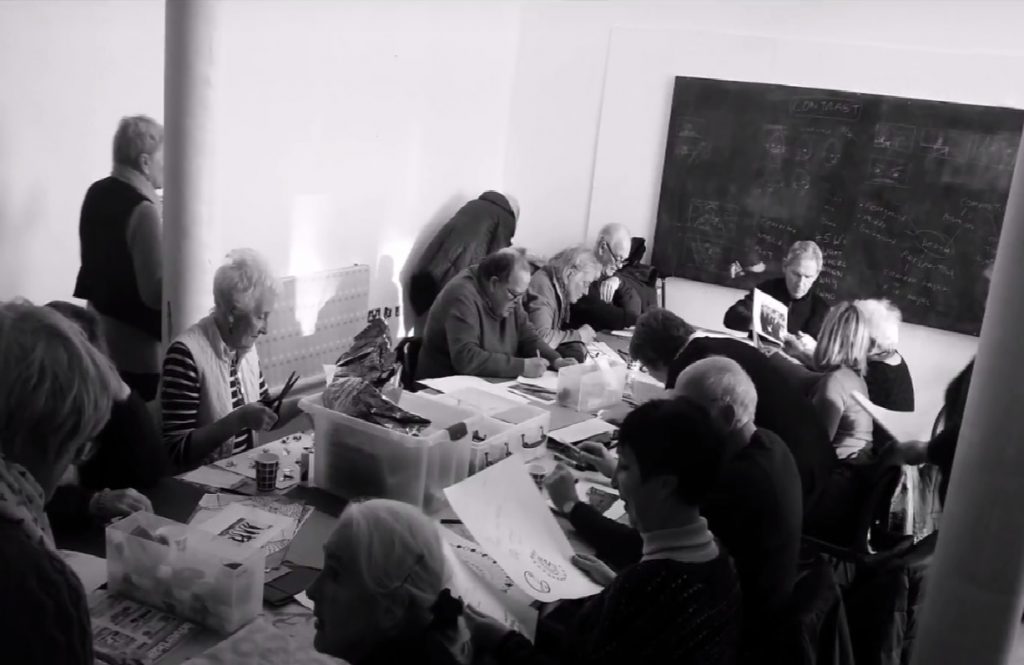 If you’ve ever wanted to experience something more creatively hands-on in relation to IMMA’s exciting programme of changing exhibitions, there are several programmes that use exploratory art-making to give you a richer understanding of the artworks and exhibitions on show in the galleries. Developed and run by IMMA’s Engagement and Learning  department (previously called ‘Education and Community’) these programmes are facilitated both by invited artists and art practitioners and our in-house facilitators from IMMA’s Visitor Engagement Team. These art-making activities focus on creative process and experimentation and are incorporated into a whole range of programming that caters for families, children, teenagers, third level groups, and adults.

For this blog we spoke to Caroline Orr (Engagement and Learning) and Joan Walker (Visitor Engagement Team) to hear more about one of the longest running of these programmes – “Studio 10” . This art-making workshop series takes place in three or four week blocks on Friday mornings, 10am to 1pm, in an autumn/winter and spring/summer schedule.  Each block focuses on a single current exhibition and explores the themes and techniques used in the making of the artworks presented in the galleries.  This involves several visits and tours to the gallery spaces, and lots of discussion, which then leads to a practical session of making in the studio. Officially called the Adult Gallery/Studio Programme it has become known as “Studio 10” – the number of the IMMA studio in which the art-making takes place. “Studio10” is free of charge and you don’t need to book in advance, you can just drop along on the day.

To give you a better idea of what the workshops feel like, we’ve taken a closer look at a recent project developed by the group.  In November 2016 Studio 10 was exploring the work of Jaki Irvine’s new work: “If the Ground Should Open.” which was on exhibition in the Courtyard Galleries. An IMMA Commission, the work is a multichannel video and sound installation commemorating the often forgotten role women played in the 1916 Easter Rising. Using themes from this work such as commemoration and the role of memory Visitor Engagement Facilitators Barry Kehoe and Joan Walker devised a specific workshop for Studio 10 participants to make their own collaborative video work. Joan describes how the idea came about and how the film was made.

Joan tells us more:
The idea for this workshop began by honing down the Jaki Irvine piece to its essential core, which is to honour the name of a remembered person. In her case it was the memory of the women who played important roles in the 1916 Rising. To say a person’s name can be powerful, even in general conversation. It makes us pay attention, it’s grounding and it makes us feel recognised.

When Barry and I took this idea to the Studio 10 group our first step was to ask the group to think about someone who had meaning for us; perhaps someone we loved, honoured or respected. This could be someone from the past or the present, someone known intimately or even someone we had never met. We sat quietly with our memories, letting them flow to the surface and allowing the chosen person’s name to fill our heads, fill our mouths with its vibrations and then to whisper and speak out that name and indulge in its vowels and rhythms. The next step was to take a pencil to paper and begin to write the name and then to progress this further by doodling with the name, playing with it, decorating it, growing it on paper. We spoke about illuminated texts where initials are glorified in gold and jewel like colours or the bright primaries of pop culture and writing the name like a popstar or in love hearts like sweethearts, the type carved in trees or graffiti on to bathroom doors.

Soon there was spontaneous writing, drawing or collaging. There was complete silence in the studio, the concentration was immense as everyone, locked in their thoughts, began a visual memorial to their chosen name.

At our next session the following week we introduced a selection of percussion instruments, to pick up from the music at the centre of Irvine’s work. We gathered in a circle and began to improvise with sound. In their own time each person allowed their special person to come forward in their mind and let it flow to their hands and their instruments so they could honour that name in sound. Immediately some people began to sing, hum or shout out their chosen name. The Studio filled with wonderful sound and the cacophony was all the time being recorded on a mobile recording desk.

Following this it was time to record the actual speaking of the chosen name. During the recording process many participants recounted cherished memories of their person. Neither Barry nor I could have anticipated the outpouring of honesty, emotion and rich tales that would go on to weave this wonderful tapestry of sound and vision.

The next and final stage was to photograph the drawings which were combined with the recordings to produce this truly heartfelt memorable piece of art. 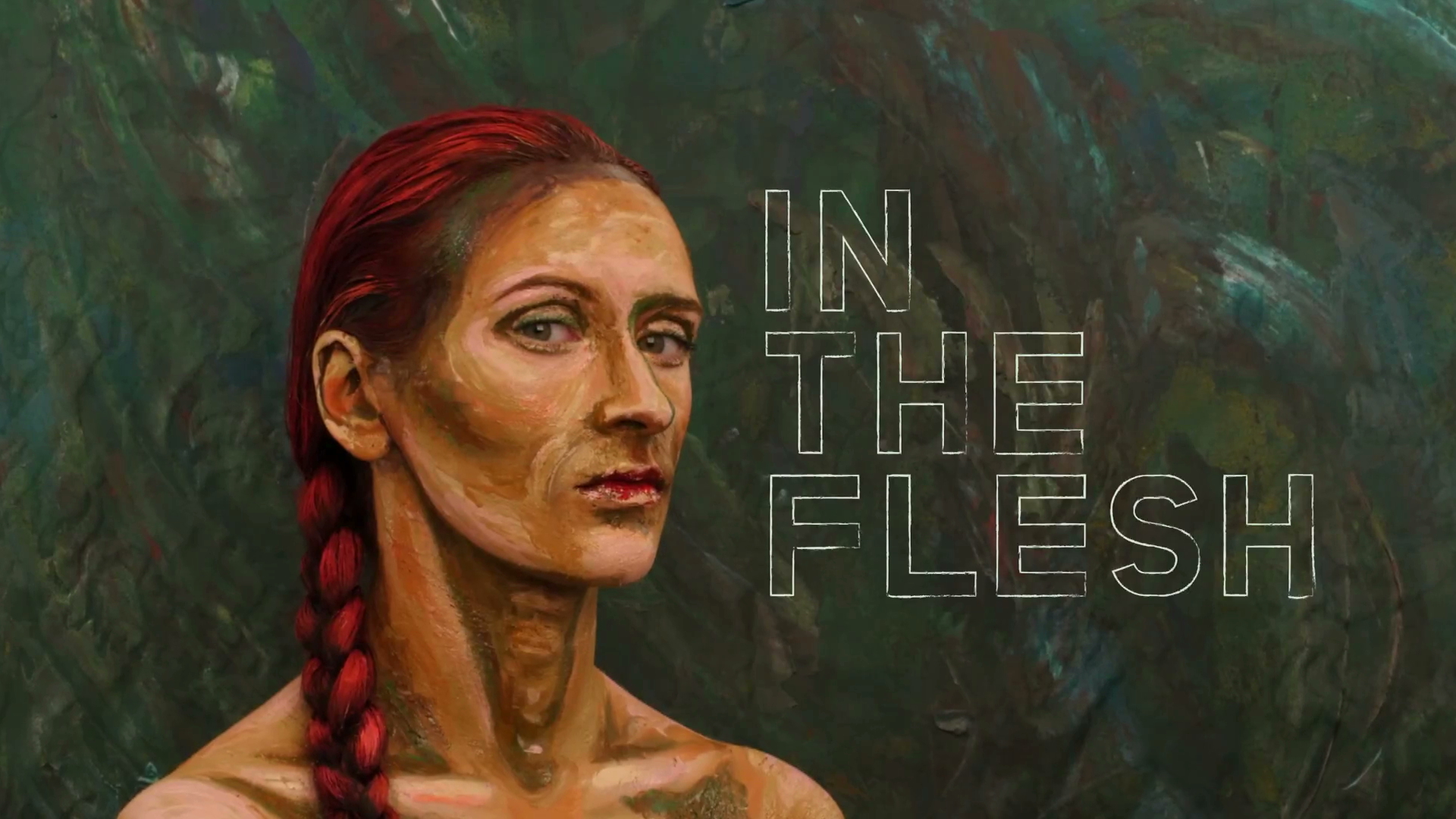 IMMA Collection: Freud Project is a landmark exhibition at the Irish Museum of Modern Art around one of the greatest realist painters of the 20th century, Lucian Freud (1922-2011). The current exhibition features a selection of 30 of the artist’s finest paintings and 20 works on paper. To celebrate this extraordinary exhibition we asked Dublin-based advertising agency Irish International BBDO to created a 20 second advertisement for television, cinema, display, digital and social media that would capture the feeling of seeing a Freud work in the flesh. We absolutely loved the result, and hope you do to! Everything you see below was achieved in camera with NO special effects or computer generated imagery - this is a model sitting very, very still with her face brilliantly painted...with an eye-opening twist.  Don't believe us? Read on to watch a time-lapse of the whole process. Original 20" Advert: II BBDO Creative Director Dylan Cotter, who nicknamed the ad 'facetime', explains the concept: The difference between looking at Freud’s portraits on a screen or in a book or catalogue, versus seeing them ‘in the flesh’ – is profound. Rachel and myself visited the exhibition in December and our reactions differed in many respects, but we both felt that. Part of it was the phy...
Manage Cookie Consent
By clicking “Accept Cookies”, you agree to the storing of cookies on your device to enhance site functionality and analyse site usage.
Manage options Manage services Manage vendors Read more about these purposes
Cookie Settings
{title} {title} {title}