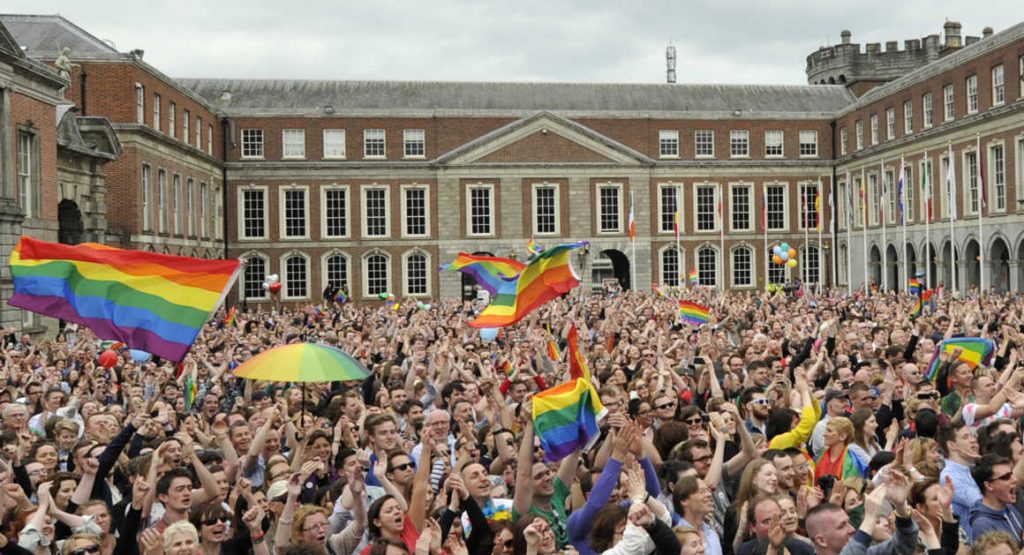 As part of the Curator’s Voice series we invited curatorial duo RGKSKSRG (Rachael Gilbourne and Kate Strain) discuss their project This is Public & Sexy, a one-night collection of artworks, choreographers and minor dramas, performed live, which co-incidentally took place on the closing weekend of What We Call Love.


What We Call Love coincidentally shared its closing weekend with that of our residency as independent curators RGKSKSRG at studio 468, a studio based in St. Andrew’s Community Centre, Rialto, Dublin 8. Located a stone’s throw from the museum, the concerns of our community-based residency and that of the major exhibition at IMMA, were spun from mutual desires. This text serves as a footnote marking this moment of interest in the softer, wetter things in life – desire, sexuality, love – as poised across two very different spaces within Dublin city. This rush of feelings to the site of presentation could be read as reflecting the collective impulse of a society to cast and hold a space where the complexities of love and sexuality can be celebrated, in public.

Beginning with the “kissing cars” – Ange Leccia’s Volvo, arrangement, 1986 – in the inner courtyard of IMMA, What We Call Love filtered out between a series of billboards across Dublin city – Felix Gonzalez-Torres, “Untitled” (The New Plan), 1991 – and ended in an anarchist social centre close to eviction – Seamus Nolan’s F**K IMMA (2015-2016). The exhibition’s reach sought to stretch itself out from the gallery walls and into the public space of the city. In this way, it linked into the wider local art sphere, bouncing off projects and events that held ideas around love, longing or belonging at their core. 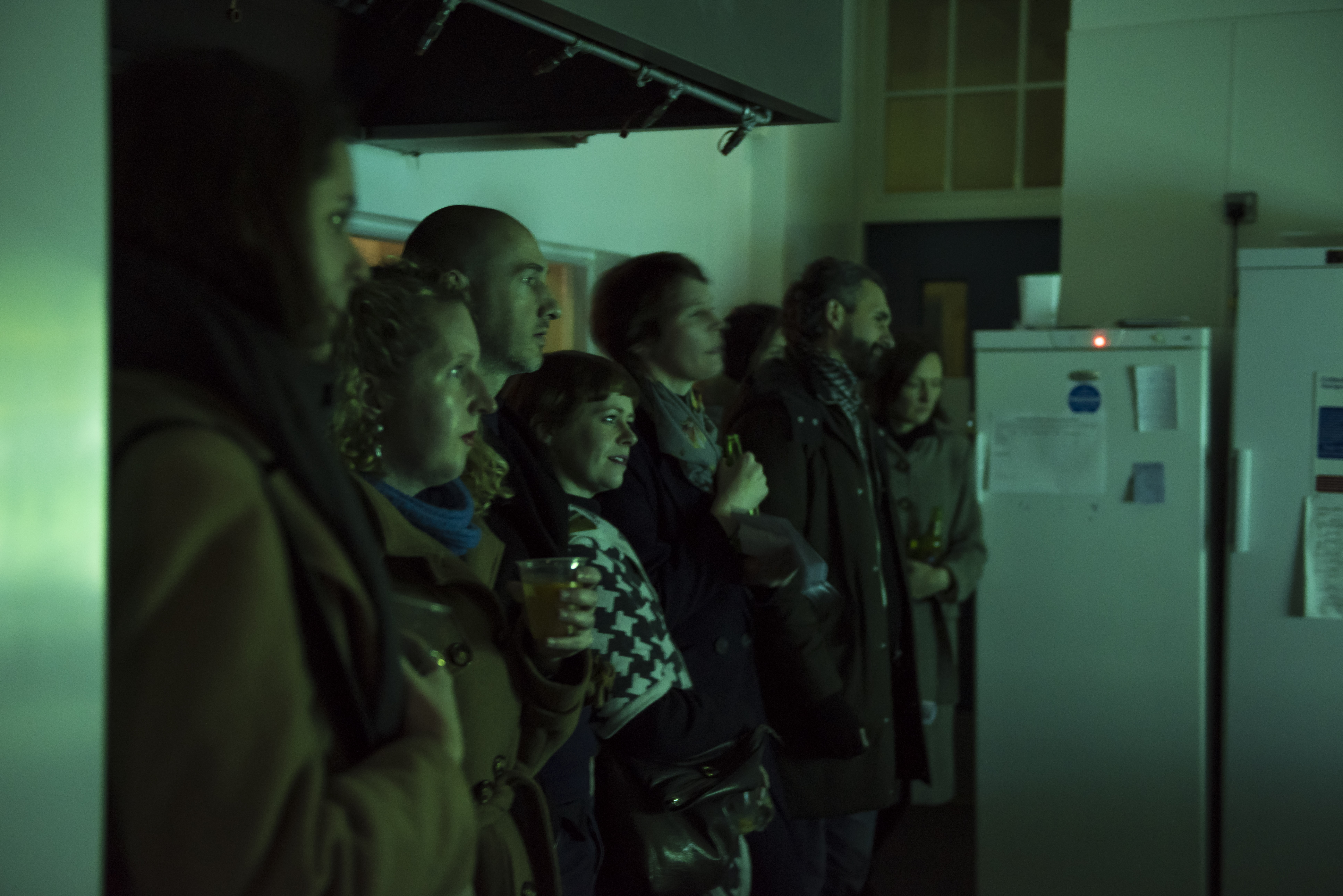 One such project was the one-night affair, This is Public & Sexy, which we curated as the closing celebration for our residency at studio 468. This was an event built upon an evocation of a coming-of-age sexuality. Although none of the artworks’ content explicitly referenced this underlying thread, the combined atmosphere and tone created in the building aimed to engender a kind of social awkwardness, an anticipation and excitement, together with chance dejections, and touches of tipsy revelry. Set within the community centre, the evening of happenings riffed off two things – the architecture of the space and the associated nostalgia of a teenage disco, together with the art practice of Berlin-based Irish artist Emma Haugh, with whom we shared the nine-month residency at the centre.

The site of the residency, run by Common Ground, was fully immersed in the bubbling environment of daily groups moving in and out of the centre. Vibrating within the many rooms and areas were variously the men’s gardening club, the amateur dramatics groups, the youth project, the political meetings, the Day Care centre. It was a village in and of itself, with all the intensity you would expect if a village were to be condensed into a single building. At times, it felt like we, as the ‘artists’, were trespassers within a private domestic space, witnesses to the intimacies of the community. Yet always welcomed.

This highly particular architecture, almost private usage, and local space, are among the elements that set apart the energy of the exhibition at IMMA, and that of the community centre. But despite these differences, the strong similarity of aims meant that both shared an urge to unravel the audience’s preconceptions of sexuality, personal identities and socio-political behaviours. To wrestle with cultural norms and seek to push some more freedoms into day-to-day agendas, a freedom of the physical body and the anatomy of space, within a contemporary culture bursting with hard-edge politics and run-dry economies of logic.

Sibyl Montague, “Disco Drinker,” 2012; digital photo frame, clay, wood, black Indonesian bamboo, mixed media.
This wrestling and agitation is implicit in the practice of Emma Haugh. The artist works via a long-form, research-rich and embedded approach and is concerned with relationships of body knowledge, performance and representations of desire. At the time of beginning the residency at studio 468, she participated in the Artist Residency Programme (ARP) at IMMA, and the group exhibition More Than One Maker in the museum’s Project Spaces. This led into the residency at studio 468, which enabled the production and development of artwork for Haugh’s solo exhibition The Re-appropriation of Sensuality at NCAD Gallery, Dublin. Curated by ourselves, RGKSKSRG, it took place towards the end of the residency from November to December 2015.

Working in this vein of research over the past two years, we have found that in this instance there seems to be something significant in the permeability that appears between the two working structures of the national institution and the community arts, in how they can present similar ideas in parallel. For us, there is something vital in the ability of an established art institution to both reflect and challenge the status quo within society, as well as the burgeoning changes that may be afoot, and to do so at the moment when such change is still ‘live’ and charged.
While typically this instant capture is associated with the fluidity and pacing of independent practice, such as ours, and the living artists with whom we work, the museum is fast-becoming a key respondent to the present moment. Increasingly the museum is listening to the cultural register, and reacting to issues of the day. What We Call Love does this with all the loft and weight of an exhibition produced by a national cultural institution, meeting issues gently, with the kiss of art history and the gloved hand of validation. If This is Public & Sexy was your first school disco, then What We Call Love was the wedding. When two different approaches to the same issues can comfortably appear, and kiss in public, it bodes well for the cultural heart of the city and its many gatekeepers. 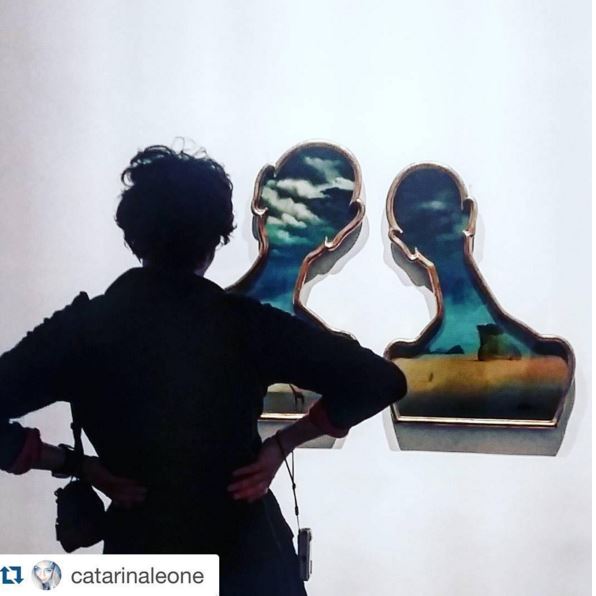 “This is an unashamedy sensual show, by turns exotic, repulsive, shocking, challenging and yet deliberately thoughtful throughout” Cristín Leach Hughes, The Sunday Times. We are now in the final three weeks of the major exhibition What We Call Love: From Surrealism to Now which ends on Sunday 7 February. Alongside the exhibition IMMA has presented an extensive programme of screenings, talks, events and live happenings to open up conversations and bring you deeper into the artists' work. We have gathered together all the resources from the exhibition in this blog, see below, making a perfect introduction to the work, or if you have already visited, a place to delve deeper for further information. Love is something that effects us all whether it's relationship love, parental love or the love between friends or communities. The exhibition What We Call Love doesn't seek to define love, rather it examines how artists have responded to love  in their work, from Surrealism to the current day. Through this lens the exhibition explores how the notion of love has evolved over the 20th century and what love means in our contemporary culture. At time beautiful and at times challenging this exhibition explores a multitude of love's faces, from crazy love to love unrequited. It has ...
Manage Cookie Consent
By clicking “Accept Cookies”, you agree to the storing of cookies on your device to enhance site functionality and analyse site usage.
Manage options Manage services Manage vendors Read more about these purposes
Cookie Settings
{title} {title} {title}