Art Nomads is a collective of culturally diverse artists living and practicing in Ireland. With very different experiences and heritages as well as art and design specialisms, they each have their own individual practice across a range of media from urban design to miniature painting, video installation, poetry and sculpture. As well as staging exhibitions, events, workshops and engaging in research and experimental projects, Art Nomads aims to work as a capacity builder and advocate for artists from diverse and minority ethnic backgrounds in Ireland. Members currently include: Muhammad Achour, Antonio D’Souza, Hina Khan, Tomasz Madajczak, Roxana Manouchehri, Joe Odiboh, Laragh Pittman, Rajinder Singh and Amna Walayat. By Art Nomads
Sun Jan 29th, 2023

“It is one of the marks of humanity and the only way to peace and the only way to co-existence in a fragile planet ecologically and in human terms, if we can develop the capacity to allow other cultures find their space and within cultures, people’s experience and stories.” ~ President Michael D. Higgins, presentation to the Unspoken Truths conference, IMMA, January 1993 .

In the following text, members of the artist collective Art Nomads respond to works in the IMMA Collection as part of their 2022 Residency at IMMA, and their involvement in the SPICE Project.

Art Nomads is a collective of visual artists from migrant and diverse cultural traditions based in Ireland. The main aim is for a collective creative engagement through exhibitions, projects, talks, and workshops. Art Nomads is a voluntary and not for profit organisation that works as a capacity builder and advocate for artists from minority ethnic backgrounds to gain visibility in the Irish art world.

The SPICE Project is an EU Horizon 2020 funded project dedicated to developing tools and methods of citizen curation that support underrepresented communities to share their perspectives through selecting and interpreting works of cultural heritage.

I found Golden World interesting. At first, it looked like traditional Persian art until I checked its title and found that it was made by the German artist Stefan Kürten.

In Islamic traditions, due to restrictions on making representations of human or living figures, floral and geometrical patterns are used to decorate religious scripts, particularly on the borders. In Royal Court art in Persia and India, birds, animals and later, human figures can be seen in secular subjects. However, in religious scripts there were still restrictions on representing living beings in the decoration of the borders. Tea washes and gold were mostly used for illumination of the borders. Thus, the painting by Kürten expresses the same feeling for me although it lacks the borders.

Kürten’s work resonates with my painting Bengal Tiger Hunt, which can be considered in the neo-miniature style and is decorated with a traditional border of flora and fauna motifs in tea washes and brown ink.  It depicts Queen Victoria hunting a baby Bengal Tiger. ‘Bengal Tiger’ was the title of a young Nawab (Prince) of Bengal and ruler named Siraj ud-Daulah, who was the first Nawab defeated and the killed by British’s forces in 1757. His body was torn to pieces and served to dogs. It was a historical moment, since after that, the occupation was expanded, and India was colonised for another 200 years. The painting allegorically represents that moment.

The border of the painting expresses ‘the law of the jungle’ where the powerful hunt the weak (see the lioness killing a Bengal tiger in the upper central border) and in the birds flying away you can notice the fear of the hunt.

I have been fascinated and influenced by Paula Rego’s work since my student years.

Rego is an icon for many women painters, especially those who engage with the body and mythology. This particular work, Little Miss Muffet, is very similar to many of my drawings that show violence against women and an ongoing battle between evil and good. An innocent creature attacked by a huge spider, but this innocent creature has lots of hidden power.

In my work Fear, I let the ancient being (the spider, having inhabited the Earth for more than 300 million years) sit on my face.

By remembering and weaving fear and trauma without any resistance, I accept that life goes beyond fear that I can’t control. Embrace life for all that is, and all that sometimes isn’t. Life is a loan, and fear exists.

I was fortunate to have recently been in the presence of Stack, a monumental artwork in The Narrow Gate of the Here-and-Now – Chapter 3: Social Fabric. I was struck by its soft, layered, and tactile nature. I remember the smell too, that warm, fuzzy scent of wool. I learned that it references the idea of women and landscape, and an association with the off-cuts from clothing factories – this global trade sustained by women’s labour.

In Evergreen, I have been using the unlikely materials of needle and thread to embroider an image of other stacks – the imposing edifices of metal containers in Dublin Port. Just as Kathy Prendergast makes layer upon layer of material to build her sculpture, I am still sewing lines of colour to form my piece. It is very small in comparison, at only 16cm by 20cm, yet it is about the cliff faces of storage in the docklands and the gargantuan ships laden with metal boxes that trade across our seas. This work is part of a larger project ‘Global Box’, my attempt to explore the fluid and transcultural nature of life in Ireland today.

The 2019 painting Yeoman Yemen by Claire Halpin in the IMMA Collection touched and inspired me as an artist to reflect on the unprovoked attack by Russia on Ukraine. All the arms deals and military support, the refugee crisis, and battles for territorial gains. The destruction of lives and properties. The nuclear threat and danger of a ‘Third World War’.

My painting, Ravages of War is a direct response to Claire Halpin’s work, showing the Ukrainian map, attacks, occupation, and annexation of territories with the blood of the innocents. All these are expressed in my use of hot and warm colours to express the war of occupation.

The natural solitude of the senses leads towards particular way of belonging.

I wrap up moments in time, in their meaning shared through recognition of familiarity.

I don’t own anything.

The death travelling with the speed of light, allows us to reach through multidimensional histories understanding the past and the future.

A shelter built on a rock is anticipating another high tide, to lift up the body into motion.

The inner compass is oscillating between the high and the low attitude.

The next is becoming the now, the past is integrated into our presence.

Sounds liberate through the flow of air.

A name becomes a prison for the named.

Find out more about the SPICE Project here

Find out more about Art Nomads through their website or at imma.ie 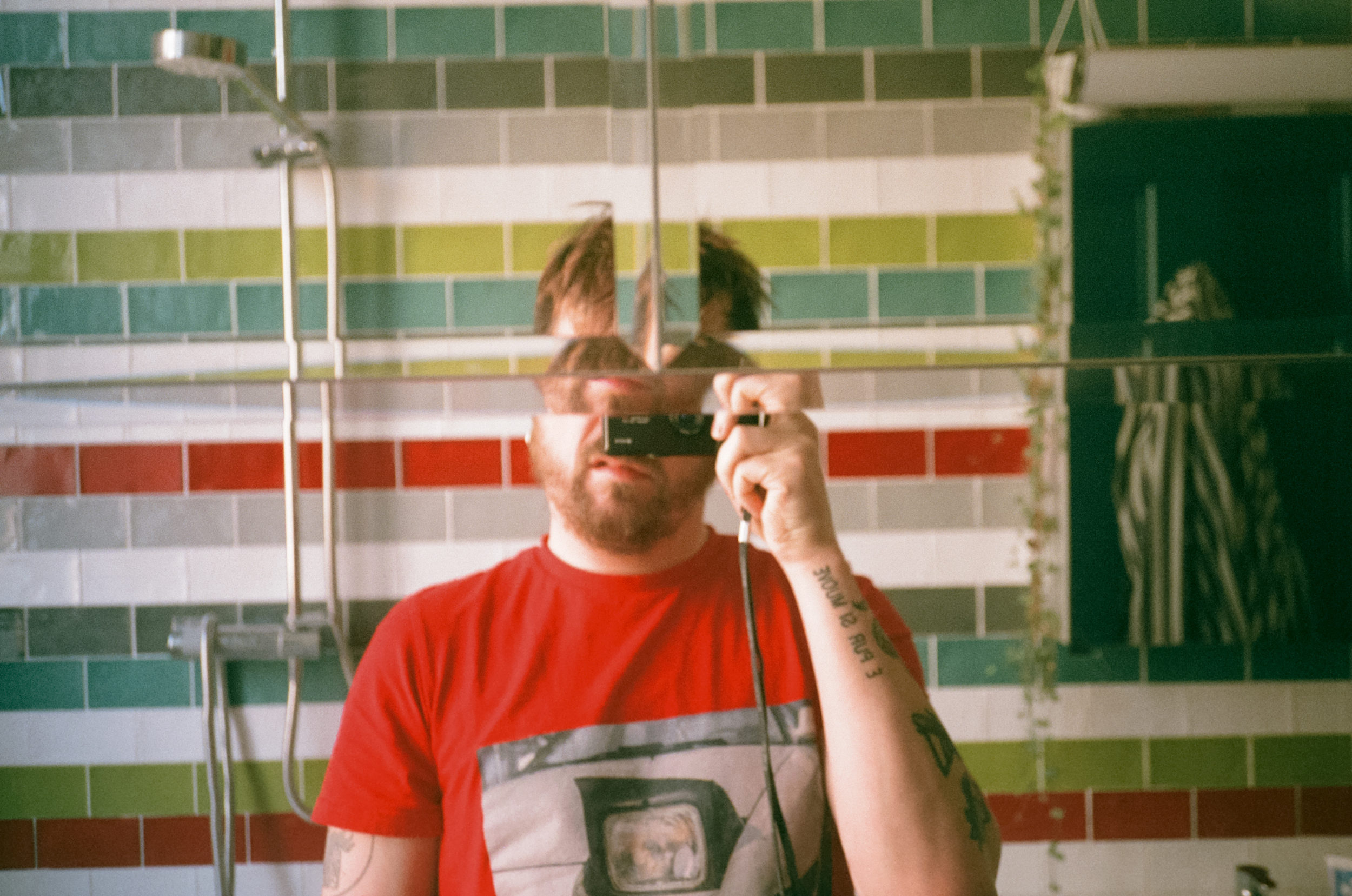 Brian Teeling, Self-Portrait, Karim's, November 2022, Photograph
In this magazine article, James Merrigan interviews Brian Teeling about what inspires and fuels his multidisciplinary practice.   Brian Teeling is an invited IMMA artist working in one of the four studios generously gifted to IMMA by the Dean Art Studios on Chatham Row in Dublin’s City Centre. Joining this dynamic creative community is an exciting opportunity for both the artists and for IMMA. ………………………………………………………………………………………………………………………………… JAMES MERRIGAN: I scrolled through close to 1500 posts on your Instagram account. Over that 7 years of photographic documentation of a life lived, loved, and experienced, I discovered the mirrored self-portrait as a perennial haunting presence as early as your fourth Instagram post-dated 13 December 2015. Can you elaborate on the photographic self in your work, specifically as a photographer, which manifests in a panoply of mirrored objects, from the car mirror, elevator mirror, bedroom/bathroom mirror, and TV screen?   BRIAN TEELING: I’d love to be able to say something delectable about them, like “I’m cruising my reflection”, but the reality is that the self-portraits began as primarily thoughtless photos, used to fill frames at the end of a roll of film.  When I look back at them now, I can register that I’m recognizing ...
Manage Cookie Consent
By clicking “Accept Cookies”, you agree to the storing of cookies on your device to enhance site functionality and analyse site usage.
Manage options Manage services Manage vendors Read more about these purposes
Cookie Settings
{title} {title} {title}