Michael Mulcahy is one of the artists most prominently associated with Neo-Expressionist painting in this country. His work expresses the deep restlessness which has led him to travel to Africa, and Australia, living with tribal communities, seeking a meaningful approach to life. His paintings hover between the figurative and the abstract, often carrying powerful shamanistic references from the cultures with which he has engaged. ‘The Navigator’, like much of his earlier work, expresses brooding sexual desire. The tension between the male figure and the brightly lit, womb-like opening is palpable, while the title may be a play on the name given to the sixth-century Irish saint, Brendan The Navigator, so called because of the belief that he sailed the then uncharted waters of the Atlantic. As such, it recalls a world where man, nature and religion were more closely entwined.
A period spent with the Dogon people of Mali led to a series of intense paintings incorporating symbolic forms based on their understanding of the constellations, and the religious beliefs associated for them with the sickle moon, the Dog Star, the egg-shaped star they call Potolo and other symbols of creation and sexuality. ‘Dogon Series 8’ offers a sizzling combination of dense marks and colours that seem to burn their way off the canvas, into the consciousness. They are essentially night paintings, giving the sense of a world come alive at night, when the earth cools after a day of scorching by the sun. Mulcahy, the shaman, foregrounds the healing, restorative activities of the night in these paintings. The very intensity with which he captures this impression creates a metaphor for the artist, who reveals things that are not always visible to the ordinary viewer.

Irish painter Michael Mulcahy (born 1952) attended the Crawford Municipal School of Art, Cork, and the National College of Art and Design, Dublin. He is now one of the artists most prominently associated with Neo-expressionist painting in Ireland. Mulcahy has travelled extensively, particularly in North and West Africa where he lived with local communities. His semi-abstract paintings make reference to those groups, such as the Dogon in Mali, with which he has engaged. Mulcahy represented Ireland at the Sidney Biennale in 1984. He is an elected member of Aosdána. View Artist 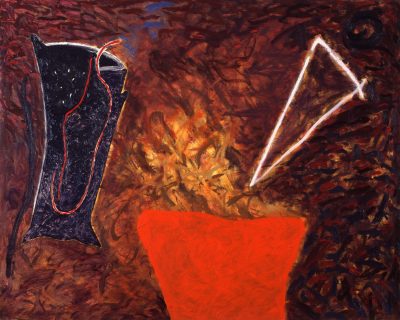 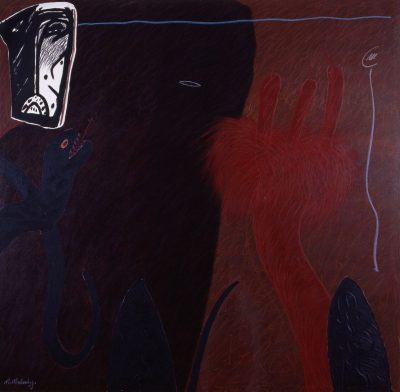 The Sepic River as the Sun Goes Sleeping Michael Mulcahy 1989 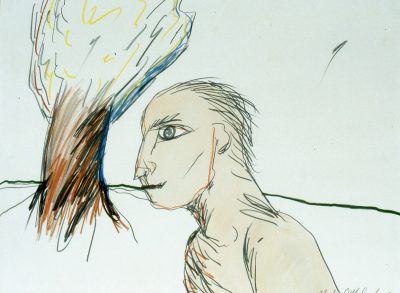