Barrel Construction (for Declan McGonagle) is a 1963 work by Royden Rabinowitch. It is part of the IMMA Permanent Collection.

Canadian sculptor Royden Rabinowitch (born 1943) began his career in London, Ontario, during the 1960s (as did his twin brother David Rabinowitch) and moved to New York in the 1970s. Although Rabinowitch's early work showed characteristics of minimalism, his nonfigurative sculptural works explore what he considers the contradiction between scientific reality and the realms of sensual and physical experience. His work is represented in public and private collections worldwide, including IMMA, the National Gallery of Canada, Stedelijk Museum of Modern and Contemporary Art and the Watari Museum in Tokyo. Rabinowitch lives in Ghent, Belgium. View Artist 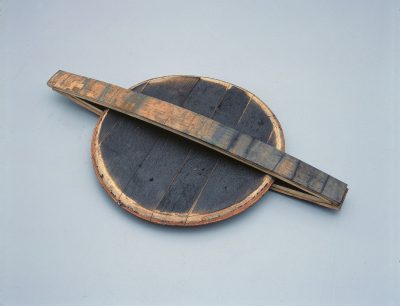