Irish artist Niamh O’Malley combines video installation with sculptural objects and drawings many of which draw on landscape as a subject. O’Malley participated in IMMA’s Artist Residency Programme in 2008.

Niamh O’Malley is interested in the fabricated nature of the viewing experience.  Her artistic practice, which often takes the form of video projections onto painted canvases, is concerned with the distance from source to spectacle, the deliberate manufacture of illusion, and ultimately, loss. Her works hope to generate the potential for an incursion of unreality into a real world alongside a sense of distance and disappointment in the nature of the image as chimera.

She received a PhD in practice-led research from University of Ulster, Belfast in 2003 and was awarded the International Studio Programme Residency at PS1, MoMa, 2003/04 and the Northern Irish Fellowship at The British School at Rome, 2000.

She has exhibited widely at venues including White Box, New York; the Centre Cultural Irlandais, Paris; Gaain Gallery, Seoul; Galleri Flach-Thulin, Stockholm; Void, Derry and the Green on Red Gallery, Dublin. O’Malley’s work is represented in the collections of Dublin City Gallery The Hugh Lane and the Arts Council of Ireland. 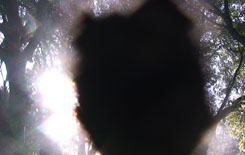 Niamh O’Malley’s work was shown in the Process Room, First Floor Galleries, from 30 September to 12 October 2008.

Twenty: Celebrating 20 Years of the Irish Museum of Modern Art