Mark Clare consistently explores issues of social value in his work. Using video and photography to record a myriad of public interventions, Clare seeks to provoke and agitate our social conscience. 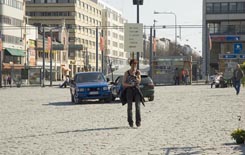 Mark Clare consistently explores issues of social value in his work. Using video and photography to record a myriad of public interventions, Clare seeks to provoke and agitate our social conscience. His work revolves around themes like globalisation, the power of the media and the economy. He is drawn to particular methods of practice that allow a potential basis for action. “Art has political capital at its disposal that should not be underestimated. The use of this potential to manipulate social circumstances is a practice of art just as valid as the manipulation of traditional materials.” As part of his practice Clare established the Potlatch Foundation to function as a catalyst to a number of his projects. A selection of these projects have found their life outside of the studio, using techniques such as poster flying, handing out leaflets and using bus shelter timetables to engage with a more diverse audience. Mark Clare has had several solo shows including, One Mans Terror Is Another Mans Freedom, RHA Gallery, Dublin, 2007; Another Day in My Kingdom, Gallery of Photography, Dublin, 2007; Nothing is Out Of Place, Oberpfälzer, Schwandorf, Germany, 2006 and Know Thyself, Temple Bar Gallery and Studios, Dublin, 2005 and Queen St Gallery, Belfast, 2006.

Clare’s work was shown in the Process Room, First Floor Galleries and in the courtyard of IMMA’s main building from January 16th until February 3rd 2008.