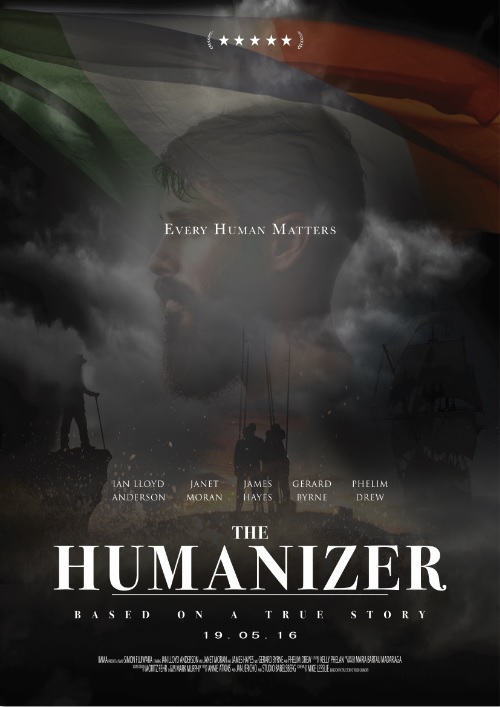 A new work by Berlin based, British/Japanese artist Simon Fujiwara, titled The Humanizer, is presented by IMMA on the occasion of the centenary of the Easter Rising. The Humanizer is Fujiwara’s proposition for an imagined Hollywood biopic composed almost uniquely of sound and based on the life of historical Irish nationalist figure Roger Casement (1864-1916). Created with contemporary Hollywood movie professionals including renowned screenplay writer Michael Lesslie (Macbeth, 2015; Assassin’s Creed, 2016) and Oscar winning designer Annie Atkins (The Grand Budapest Hotel, 2014; Bridge of Spies, 2015). The Humanizer is one of three major new works commissioned by IMMA that reflect on the legacy of the commemoration of the Irish State. New commissions by Irish artists Jaki Irvine and Duncan Campbell will be presented later this year.

Simon Fujiwara was drawn to Sir Roger Casement’s extraordinary life. Considered the world’s first human rights campaigner, he was awarded a knighthood in recognition of his fight for the rights of slaves, before turning against the British in the Irish nationalist cause that lead to the Easter uprisings of 1916. His fateful demise came at the hands of the British government and his execution was sealed following the discovery of a highly controversial diary, ‘The Black Diaries’, containing explicit “evidence” of Casement’s homosexual activities. Casement’s life was so full of drama that as early as 1934 there were plans to shoot a Hollywood Casement biopic, as Fujiwara discovered in letters sent from Universal Pictures to Casement family members. Although the life of Roger Casement provided enormous potential material for a film the movie was banned by the censorship laws in the nations involved.

Inspired by the Universal Pictures letters which are housed in the archives of the National Library of Ireland, Fujiwara enlisted a group of contemporary Hollywood movie professionals to collaborate with him in imagining how the facts of Casement’s biography might be depicted through the lens of today’s multinational movie corporations. Fujiwara gave Casement’s biography to acclaimed Hollywood screenwriter Michael Lesslie who developed a movie script in which Casement’s life and character were adapted, manipulated and often completely reinvented to comply with the current models of the Hollywood biopic form. Leslie presents Casement as a righteous man born in the wrong age – a man who may have betrayed the country he worked for, but never betrayed his principals. In true Hollywood style, every character, action and line in the script underlines this overarching narrative construct.

The script was then enacted by a company of professional actors in Dublin, before being set to a musical score that evokes a prolonged Hollywood trailer. The sound element, which includes Hollywood style music and foley, was produced in Berlin in collaboration with artist and sound designer Moritz Fehr. Set across a series of four rooms that house objects and personal effects, the sound fragments of the biopic interject into the rooms at unexpected times, rupturing what appears to be, at first glance, an authentic historical exhibition of Casement’s life.  Fujiwara’s selection of objects did not belong to Casement, however, but are props loaned from Berlin’s renowned Babelsberg Film Studio where a number of historic movies from Fritz Lang’s Metropolis, 1927, to Tarantino’s Inglorious Basterds, 2009, have been filmed.

Accompanying the exhibition props are a series of replica documents from Casement’s life including love letters, an arrest report and of course the famous ‘Black Diaries’ all produced by Oscar winning designer Annie Atkins and historic handwriting specialist Jan Jericho (Valkyrie, 2008, Cloud Atlas, 2012). Here existing paper documents from Casement’s life are recreated through the lens of the Hollywood designer to make them appear, at times, even more authentic than their originals.

Through fragments of sound, a minimum of objects, documents, and an environment of red curtains and carpet reminiscent of a cinema, The Humanizer seeks to evoke the experience of a big budget Hollywood movie with the most modest means. Without the seductive moving pictures associated with movies to communicate exactly what we are seeing, the audience is no longer a passive recipient but an active agent in visualising the movie. The Humanizer asks if today’s audience, with its unprecedented reserves of visual information can picture an entire movie, its locations, cast and even its message without ever having to see it?

The Humanizer is presented as part of an exciting on-going initiative, New Art at IMMA, proudly supported by Matheson, which allows IMMA to continue to support artists’ vital work in a strand of programming that recognises and nurtures new and emerging talents, new thinking and new forms of exhibition-making.

The work is supported by Ireland 19/2016 and is presented as part of the Ireland 2016 Centenary Programme.

For a full programme of events and free tickets visit www.imma.ie