Yuki Okumura: Half the World Away The Process Room 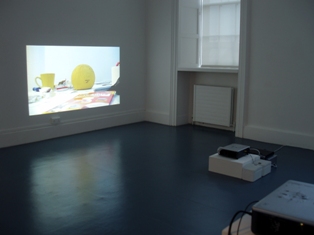 "The main video piece features a punctured yellow soccer ball shot at several spots in the site of IMMA. At first in the video, only half of the ball appears, but gradually and slowly it inflates to the full circle. In reality, the ball gets air from outside by itself, but as an image, it may look like the ball is in the transitional state; first it appears like a half ghost, not all there, but gradually it comes to this world, finally appearing as a full entity. This transitional state, somehow, is analogous to my state in last 2 months in Ireland. When I first came here, I felt like half of me was still in Tokyo, invisible, half the world away from Dublin. The works here all reflect my observation of the city and the people here, in such absent-minded state." Yuki Okumura _ ARP ‘07

Through his work Yuki Okumura aims to illuminate and even reconcile the gap between the physical world itself and the work perceived by the human brain. He probes the concept of identity and what makes the human mind and self unique. One element of his practice has expanded the realm of body art through the creation of discrete and precious works constructed from fingernails and saliva. Okumura exploits the uneasy tension between the animate and inanimate. His other works play with the notion of time and travel, bringing us on impossible journeys with numbers, digestion, feedback and everyday objects. Born in Aomori and based in Tokyo, Yuki graduated from Tama Art University and received an M.F.A. at the Tokyo National University of Fine Arts and Music (2004). In 2000, he was awarded the Grand Prix, Philip Morris Asian Art Awards. In 2001, he participated in First Steps: Emerging Artists from Japan, Grey Art Gallery, New York University. For further information on Okumura’s practice please go to www.misakoandrosen.com

Okumura selected several works by Japanese video artists which was shown in the process room from 11 to 16 December 2007. The selection was titled Theory of Everything.

For more information on this exhibition please download the following document

Theory of Everything Process Room doc.

Through his work Yuki Okumura aims to illuminate and even reconcile the gap between the physical world itself and the work perceived by the human brain. View Artist
Manage Cookie Consent
By clicking “Accept Cookies”, you agree to the storing of cookies on your device to enhance site functionality and analyse site usage.
Manage options Manage services Manage vendors Read more about these purposes
Cookie Settings
{title} {title} {title}