Morton Feldman is widely considered to be one of the most influential composers of the second half of the 20th-century. During his long career he was closely associated with a number of visual artists – particularly those connected with the New York School. In 1967 he curated an exhibition entitled Six Painters in Houston, Texas, and Vertical Thoughts takes its inspiration from this original project. 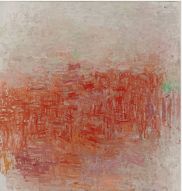 Born in New York City in 1926, Morton Feldman was a pioneer of indeterminate music, a development associated with the experimental New York School of composers, which also included John Cage and Christian Wolff. From the 1950s Feldman began to write pieces which had no relation to traditional compositional systems and which experimented with musical notation. Feldman found inspiration in the paintings of the Abstract Expressionists and wrote a number of pieces in honour of artists who became his close friends such as Rothko Chapel, 1971, commissioned on the death of Mark Rothko and performed in a chapel which housed his paintings, and For Philip Guston, 1984. Feldman continued to compose until his death in 1987.

The exhibition is supported by The Irish Times, RTÉ Supporting the Arts and the Cultural Tourism Scheme of the Department of Arts, Sport and Tourism. Works in the exhibition by Swiss artist Sonja Sekula are kindly supported by the Swiss Embassy in Ireland.

The Curator’s talk by Juan Manuel Bonet is supported by the Cervantes Instituto Dublin.