Signal to Noise, a survey of the past ten years of painting and drawing by the renowned American artist Terry Winters, tracks the painter’s evolving relationship with abstract imagery. Following earlier investigations in the 1980s, which centred on botanical and biological processes, Winters here explores the cerebral spaces of information technology and issues of cognition and narration as they relate to abstract painting. His forcefully made paintings and drawings invoke networks of modular forms and structures, employing an instinctive, unruly, symbolic language that sets out to encapsulate entire worlds. The exhibition includes  pieces from Winters’ major series Set Diagram, 2000, and Local Group, 2004, as well as his recent Knotted Graphs, 2008, series. The relationship between Winters’ singular large-scale works and his use of drawing and painting as serial presentations are also explored. 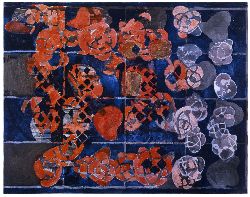 A fully-illustrated catalogue accompanies the exhibition and includes essays by the American writers Francine Prose, Peter Lamborn Wilson and David Levi Strauss, as well as by Enrique Juncosa, Director, IMMA. The texts explore a range of subjects, from Hermeticism and Abstraction to the use of technical images in contemporary painting. To buy the catalogue please click here

The exhibition is sponsored by H&K International and is presented in association with The Irish Times and JCDecaux.

A Limited Edition print by Terry Winters is available to buy, please follow the link to IMMA Edition: Terry Winters