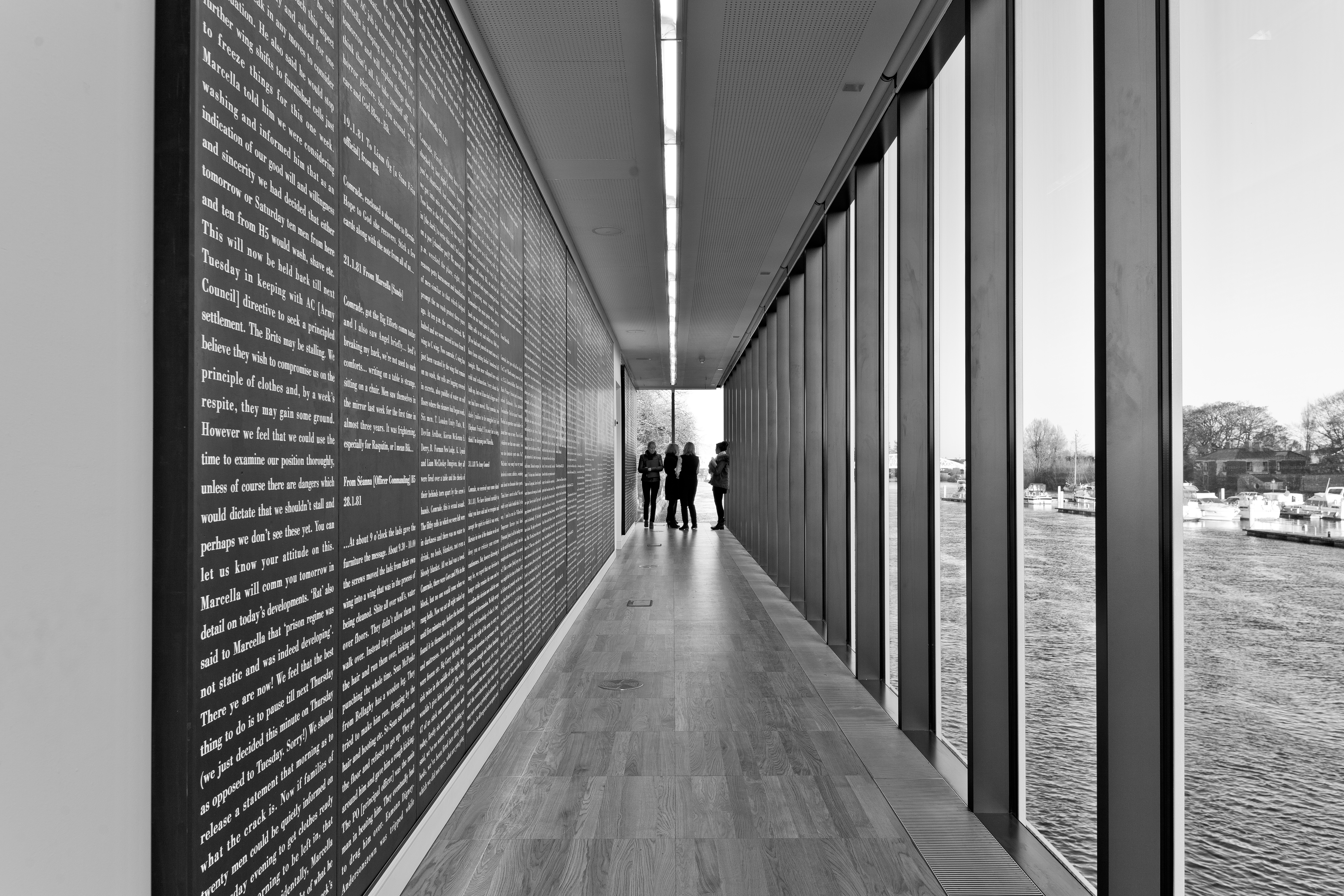 Shane Cullen’s Fragmens sur les Institutions Républicianes IV consists of ninety six large tablet-like panels onto which the artist has transcribed meticulously in paint the contents of the numerous Comms; the written communication smuggled in and out of the H-Block prisons in the 1980’s. The entire project took some four years to complete. For the first Belfast showing at The Old Museum Arts Centre, there was a performance dimension to the work. Cullen himself was present in the gallery space, painting several panels over four weeks.

It is evident that Cullen appropriates the conventions and thematics of state acts of commemoration. Cullen treads ground more familiar to the sculptor in recent history. The art object, in the form of the sculptural monument, is central to official acts of commemoration. Take a commissioned work such as Oisín Kelly’s Children of Lir in the Garden of Remembrance (Dublin) as an example. This work plays a crucial role for the modern (Irish) nation state by enhancing and solidifying historical narratives that privilege and legitimise the formation of the state. The tradition of the Tomb of the Unknown Soldier is another example of a commemorative site. Its role is to link themes of collective sacrifice and fatality in war to the ideal of the nation state. Solemnity and reverence before the anonymous figure serves to gel kinship as a national act. Consider also the Vietnam Memorial in Washington with its vast stretches of text listing the dead. This idea of the monumental edifice is echoed in Cullen’s work through the sheer volume of text, scale of presentation and its sombre, classical tones. For Cullen to monumentalise the Comms and so mark the hunger strike a struggle for legitimacy is, in one sense, to recognise a key site through which such a struggle takes place.

Cullen’s work can also be seen to draw upon aesthetic structures through which the republicans been imagined in recent European history. The title of the piece relates to the writings of Saint- Just. The use of Bodini font also draws a parallel with the French revolutionary doctrine, while the austere monumental scale and the theme of martyrdom recall neoclassical ideals as a key feature of republican traditions. To re-contextualise the Comms in this way is to connect eighteenth century republican ideals to the present strain in Ireland. There certainly is a strong declamatory tone to this work. It upset one artist to the extent that Cullen was accused of being a “Nazi and an Irish nationalist”. This prompted Cullen to release the following statement:

“I have never been a member of any political party or grouping, nor do I hold any brief for the expression or dissemination of National or nationalistic ideals. The result of my practice as an artist exist purely because on my own independent phenomenological research and investigations.”

This in itself begs the question as to the relationship between the artist and the material he works with.  For if a republican monument is not being created what is it?

For Cullen, the answer is a space through which to explore the complexity of history and its formation through the art object. For the viewer though, evidence is needed as to how a critical distance is marked from polemical intent as a matter of experiencing the work (rather than simply accepting Cullen’s statement). The work’s indebtedness to the legacy of Conceptualism is an important factor aiding this. The visual scarcity of the work with its textual prominence and the eschewal of painterly competence as a means to confound tradition connoisseurship draw the viewer into its discursive terrain. It is one where effort is given to maintaining a rigorous and ongoing examination of the discursive and institutional settings through which art is made and understood.

The above text has been abridged from an essay titled Judge on Durée: Shane Cullen’s Fragmens sur les Institutions Républiciances IV by Gavin Murphy. The complete essay can be found in the exhibition space.  Gavin Murphy is an art historian based in Galway.

Fragmens sur les Institutions Républiciances IV was purchased by the Irish Museum of Modern Art in January 2000 and consists of 12 blocks; three blocks will be shown in rotation.  The first three blocks were displayed as part of the Luan gallery’s inaugural exhibition entitled Borrowed Memories, a collaborative exhibition between the gallery and IMMA’s National Programme. The exhibition will be accompanied by a programme of talks and lectures.