Art Alongside is a visual arts project for primary schools supported and funded by Wexford County Council & the Arts Council. The aim of Art Alongside is to maintain the live connection between the artist and her/his own work, alongside working in an interactive context with school children, teachers and community, in a structure that will allow this to take place. The title of this year’s project is Seven leagues more. The project celebrates the seventh year of Art Alongside which features the successful partnership between Wexford County Council, the Arts Council, Wexford Arts Centre and the Irish Museum of Modern Art. 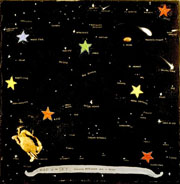 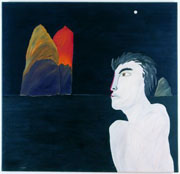 In September 2007 a group of artists exhibited their personal artworks created especially for the annual Art Alongside exhibitions over the past seven years. The exhibition was entitled Seven leagues later and was held at the Wexford Arts Centre alongside a slide show displaying examples of children’s work from each of these projects. In 2007 class groups visited the Seven leagues later exhibition, which became the starting point for a new project based on materials, themes or images that inspired the children. Seven Leagues more is the second exhibition in this project and comprises works selected from IMMA’s National Collection alongside a selection of works created by the classes involved in the Seven leagues later project. Artists from the IMMA Collection on show include John Kindness, Alice Maher and Michael Mulcahy.

IMMA staff will facilitate workshops in response to the exhibition. These workshops are supported by the Department of Education and Science.