A fascination for the urban spaces and the psychology of architecture constantly inform Byrne’s way of thinking. Having regularly worked in architectural agencies, she has an inbuilt notion of the potentiality of space in the city and a keenness to improve social awareness in the built environment.

Invitation au Voyage: An Internal Transport System for the Museum

A text to accompany In The Process written by Caroline Hancock, Projects Curator: Exhibitions

Rhona Byrne’s interest in the history and present of a place and its people are characteristic of her work. Two remarkable previous examples of her thoughtful engagement with different Dublin communities are Home in 2004 and The Umbrella Project in 2006. The first was an endearing collaboration with residents of the housing estate of Ballymun and their local Pigeon Club. The second became an unusual programme of guided tours of hidden or purposefully ignored city specificities like the night life, multicultural shopping or urban wildlife. Their ephemeral nature is counteracted through post-event documentation – film, publication, photographs and so forth. Eminently down-to-earth and user-friendly, these projects also appear to have lasting effects on the consciousness of those involved. Such practical infiltration into society and audience participation can be likened to the work of artists like Jeremy Deller or Shimabuku.

Byrne has been in residency at the Irish Museum of Modern Art since June and in that time she has been attentive to various activities or particularities at the museum and on its grounds from the formal gardens staff to the blind dog training centre, the severity and greyness of the courtyard or ghost stories. In the end, for this project, Byrne settled on the idea of enabling IMMA museum staff to alter the experience of their daily walk from their computer screens to the café in the basement and by extension their entire relation to their workplace and day. Due to the nature of the building and its long corridors this tends -depending on the exact location of their office- to be a surprisingly long way. The museum visitors experience those same long corridors on the first floor in a very different manner since the journey is slowed down and animated by art. Indeed, following her evocative roller coaster sculpture presented by FOUR in the Kerlin Gallery, Dublin, earlier this year, Instead of Walking proposes eight specially customised (or rather neutralised) scooters for worker locomotion at IMMA. Previous training in design filters into Byrne’s art practice and here she has stripped the scooters of any commercial tagging and appropriated them. Parking stations with recycled yellow flag poles are sited by the lifts. In a similar way to Lucy Orta’s creations, these object-sculptures are eminently functional.

That a museum would need an inbuilt mode of transport other than walking is rather incongruous except, of course, in the instance of wheelchair users. This project will certainly emphasise how different access transforms the viewpoint and experience of a place. It might appear as strange initially as police on roller blades or funerary and ambulance boats in Venice. These painted scooters refer to eco-travel community bicycles such as the provision of free white bicycles in the Netherlands.

A fascination for the urban spaces and the psychology of architecture constantly inform Byrne’s way of thinking. Having regularly worked in architectural agencies, she has an inbuilt notion of the potentiality of space in the city and a keenness to improve social awareness in the built environment.

A conversation with David Canter, Liverpool-based architectural psychologist, will further develop during this project. They will continue their dialogue through an analysis of maps submitted by IMMA staff tracking their gliding trips through the museum. Humorously indicated by the mini-compasses incorporated onto each scooter, Byrne aims to document some form of mental mapping and internal journeys of the users.

The actual process will be essential to the final development of the project. Another recorded conversation with Irish architect Frank Hughes about the architecture of the Royal Hospital of Kilmainham further develops this project. Frank talks about the spatial layout, repetitious and linear qualities of the building.  Byrne will observe and highlight notions of flux in the museum. Even though movement will be quickened, work time and efficiency will presumably be playfully subverted. As the staff scoot through the corridors, exercising their bodies and minds and experiencing new perspectives on their routine and work surroundings, it will be intriguing to note shifts in outlook or attitude.

Zooming through the corridors might approach the fun fair spirit of Carsten Höller’s slides in Tate Modern’s turbine hall or the ridicule felt when mounting Guy Ben-Ner home cycles to ignite his film made for sculpturprojekt in Muenster last year. Playfulness is present in most of Byrne’s pieces like the tree houses (for instance Nothing Happens built in Gallery For One, Dublin, 2006). Encouraging an activity associated with youth culture (and her starting point was a toy store), she attempts to inject enjoyment into the workplace.

Somehow the military hospital past and structure of the building lead Byrne to pinpoint a possible awkwardness or slowness in today’s use of the place as a modern and contemporary museum. In tongue-in-cheek fashion and in synch with the historical caring status of the building, Instead of Walking proposes a tool for improved well-being in the museum. Byrne’s genuine concern for people’s welfare and spatial awareness in their city environment leads her to suggest this journey. Her artworks have a tendency to become incredibly humanistic gifts. In its epicurean nature, this pleasurable invitation reminds me of Watteau’s painting Pilgrimage to Cythera (1717, Louvre, Paris)…

Often responding to a place or situation, Rhona Byrne makes objects, site-specific, gallery and context-based installations, films, publications and collaborative event-based projects that focus on the interplay between human beings and their surrounding environment at both macro and micro levels. View Artist 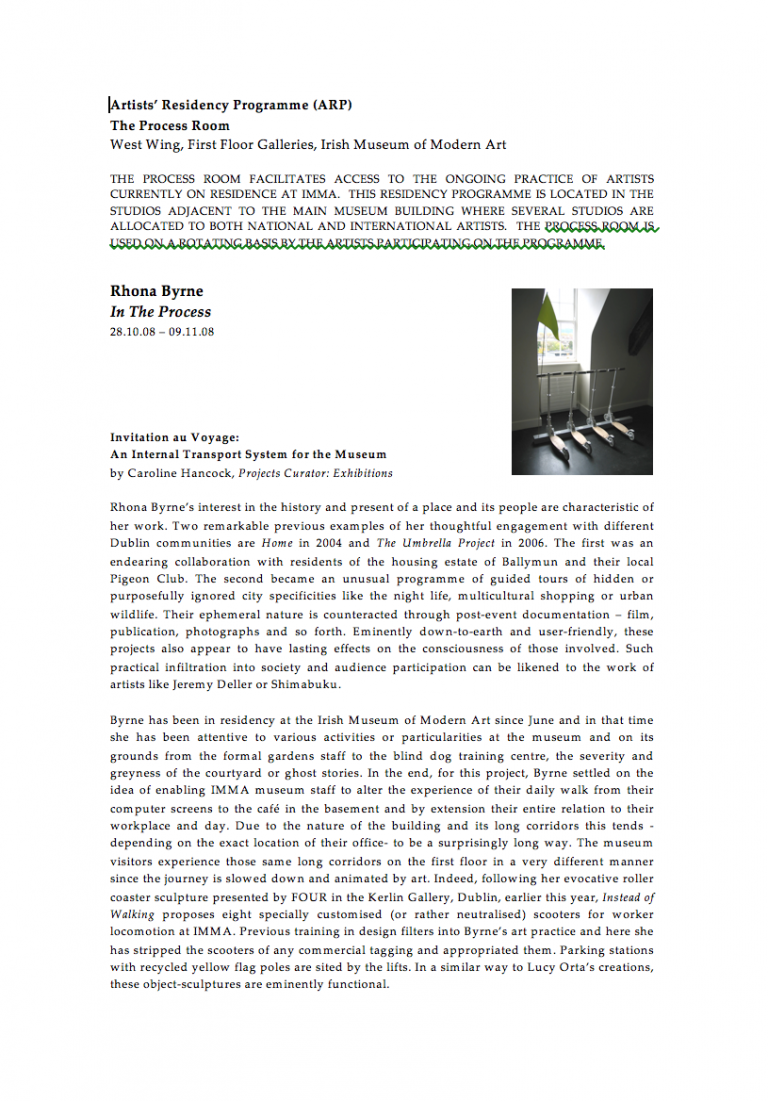