This is the first exhibition in Ireland of a new film work by the French artist Pierre Huyghe. Streamside Day is a short film that explores the role of ideological and symbolic systems in establishing social rituals and traditions. The film opens with scenes from an Eden-like landscape and traces the formation of a burgeoning community located in the Hudson Valley, USA. As the film progresses a young family is seen relocating to a new housing development. Huyghue then follows the family’s routines as they join in the neighbourhood celebrations, which then becomes the main part of the film. Huyghe has gained international prominence for works that explore reality and fiction, memory and history. Incorporating film, sculpture, sound, and architecture in his diverse works, the artist intervenes in familiar narrative structures to investigate the construction of collective and individual identities. 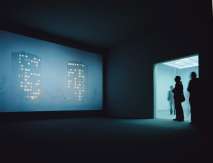 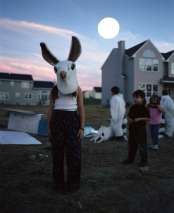 This film was first shown at the Dia Foundation, New York.

An exhibition guide, with an essay by Rachael Thomas, Senior Curator: Head of Exhibitions, IMMA, accompanies the exhibition.

Please follow the link to view the essay from the exhibition guide by Rachael Thomas: