Philippe Parreno: November is an ambitious overview of the work of innovative Algerian/French artist Philippe Parreno. This major solo exhibition comprises some 15 mixed-media works ranging from such seminal films as The Boy from Mars to installations such as Speech Bubbles. This exhibition is not merely a survey of previous works but is seen by Parreno as an opportunity to revisit and even refabricate older works in order to transform the gallery spaces at IMMA. The title, November, is a starting point for injecting life and energy into the exhibition as the newly adapted works are exhibited from the month of November. As part of the Irish Film Institute programme a new film by Philippe Parreno, 8 June 1968, 2009, will be screened for the first time in Ireland, along with his ground-breaking earlier film, Zidane, a 21st Century Portrait, 2006, made in collaboration with Scottish artist Douglas Gordon. 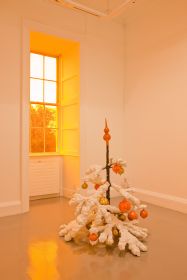 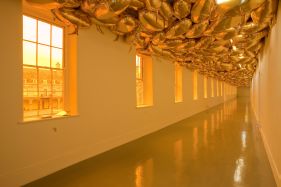 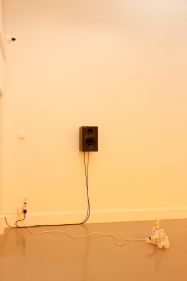 The exhibition is an international collaboration between Kunsthalle Zürich; Centre Pompidou, Paris, and Bard College, New York. Each venue will curate slightly different exhibitions in close dialogue with the artist.

Two publications accompany the exhibition, a comprehensive survey catalogue of Philippe Parreno’s work, including critical notes by Christine Macel, Chief Curator, Centre Pompidou, Paris, and the first chronological list of the artist’s works to date. It also includes an interview with the artist by independent curator Hans Ulrich Obrist, an essay by Maria Lind, Director, Centre for Curatorial Studies, Bard College, New York, and a work of fiction inspired by Parreno written by IMMA Director Enrique Juncosa. Price €49.00. Click here to buy the catalogue.
Its companion book, Parade?, a children’s book, which features sixteen monsters inspired by Parreno’s work, created and illustrated by Johan Olander, with a storey written by the artist. Price €18.00. These books are produced by Centre Pompidou Editions and JRP Ringier.

The exhibition is supported by L’Ambassade de France en Ireland and Cultures France.

Click here to buy the catalogue for the exhibition.