The IMMA Collection is a unique resource which is made available to the public through a vibrant programme of temporary exhibitions and projects. Collection Exhibitions may explore the work of an individual artist, or address a theme or historic period.

IMMA and VISUAL, Carlow, are delighted to present a major exhibition of the work of Irish artist Patrick Scott, showing across the two venues as a single exhibition. Patrick Scott: Image Space Light brings together the most comprehensive representation of this remarkable artist’s 75 year long career. Scott had his first exhibition in 1941 with the White Stag Group.

IMMA and VISUAL, Carlow, are delighted to present a major exhibition of the work of Irish artist Patrick Scott, showing across the two venues as a single exhibition. Patrick Scott: Image Space Light brings together the most comprehensive representation of this remarkable artist’s 75 year long career. Scott had his first exhibition in 1941 with the White Stag Group. The exhibition brings together more than 100 pieces that illustrate the breadth and longevity of his career as an architect, designer and artist. The exhibition at IMMA concentrates on Scott’s early works from the 1940s to the early 70s while VISUAL displays works from the 1960s to the present.

Artist Corban Walker has been invited to guest-curate a selection of Patrick Scott’s works for the Link Gallery in VISUAL. Focusing on the theme of the grid in Scott’s work and responding to Scott’s graphic design work, Walker has also created a site-specific installation for the window area in the Link Gallery.

Patrick Scott (1921 – 2014) was born in Kilbrittain, Co Cork, and trained as an architect. From 1945 he spent 15 years working with Michael Scott in the architectural practice of what became Scott Tallon Walker, where his innate talent as an artist and designer developed in unison.  He became a leading graphic designer with the Signa Design Consultancy (set up in 1953 by Michael Scott and Louis le Brocquy), all the while continuing to test various ideas in his painting. On winning a National Prize at the Guggenheim International Award in 1960 and representing Ireland at the XXX Venice Biennale in the same year, Scott became a full-time artist.

1.30pm-3.00pm Busaras, Dublin. Meeting Point-Information Desk
(Entrance of Department of Social Protection, adjacent to the Busaras building and opposite the Luas Line).
To mark the final weekend of the exhibition the IAF invite you to experience one of the artist’s  most significant collaborations with the architectural firm Michael Scott and Associates (later from 1975, Scott Tallon Walker) within their iconic building of Busaras, Dublin (1944-53). This site- specific discussion will give a range of perspectives on the history of this building and offers the opportunity to pay tribute to the legacy of Pat Scott’s pioneering role in modern art and design, including the artist’s mosaics that remain an enduring feature of one of the city’s most celebrated public buildings.

This event is in collaboration with the Irish Architecture Foundation. Booking is essential.

Information and resources for teachers and students about the Patrick Scott exhibition focusing on a select number of art works featured in the exhibition. Click here for more information on IMMA’s Second Level Programme.

Sé Merry Doyle’s documentary ‘Golden Boy’, the most definitive film portrait of one of Irelands most famous living artists, will be shown as part of the exhibition. The film charts the artist’s journey from his childhood in Cork and his embracing of modernism when he encountered the White Stag Group during WW2. Patrick recalls his time as an architect with Michael Scott before he decided to be a full time painter in the early 50’s. Locations include his home and studio in Dublin and his family home Kilbrittain County Cork. The film features his great friend Seamus Heaney, Dorothy Walker and Stephen Pearce. Patrick takes centre stage alongside his best friends, his cats! 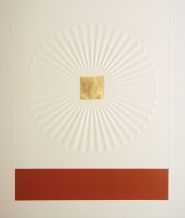 Also on sale is this stunning limited edition print produced by Patrick Scott for IMMA in 2009. This carborundum embossed print with gold leaf is embossed to create the same subtle qualities achieved in his paintings. This print, Untitled, 2009, is an edition of 75, signed and numbered by Scott and is on sale at €2,000. The edition is on view in the exhibition in the Garden Galleries. For more information and to buy please click here.

This print is now Sold Out. To celebrate the exhibition a limited edition print by Patrick Scott of his tapestry Device (1971), which is held in the IMMA Collection, is available to buy for just €50. An edition of 500, the Patrick Scott print is being produced especially for this exhibition. This offer is a great opportunity to snatch up a print by one of Ireland’s greatest artists and to start, or add to, your art collection.

The exhibition is kindly supported by Irish Rail, Colourtrend and THE IRISH TIMES.