3C 75 is a binary supermassive black hole system in the NGC 1128 galaxy. Bound together by their mutual gravity, these two black holes are spiralling around each other and will eventually merge. The title also bears the fusion of the last words from Becketts The Unnamable and Joyces Ulysses, respectively Ill go on and I will Yes. Both The Unnamable and the final chapter of Ulysses are monologues, one spoken by an unidentifiable "self", the other interior, known as Molly Bloom’s soliloquy. 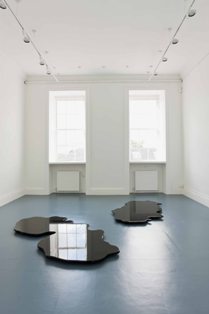 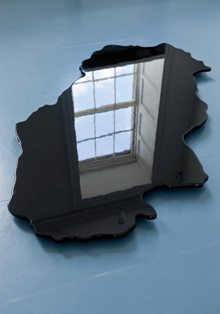 The two mobile, reflective black shapes on the floor are based on macro photographs of the final full stops from the original handwritten manuscripts of both these literary works.

Black holes and full stops inscribed by two connected writers merge here in a project that addresses the question of representing what is not representable. Beckett once said that his own language appeared to him like a veil that must be torn apart in order to get at the nothingness behind it. The veil could be considered here as the luster where the viewer can see his own reflection, the surface of these shapes that were originally just punctuation marks signifying an end, each one aleatory and unique. This surface is the event horizon, the boundary of a black hole beyond which events cannot affect an outside observer, beyond which nothing can escape. Yet any object or light that approaches the horizon from the observers perspective appears to never quite pass through.

Hidden at the core of the black hole is a singularity, a point of infinite density where space and time cease to exist as we know them, where all the rules of physics, language and representation break down. There is desire in both endings, the Unnamable will go on and Molly says yes. We all search for another image behind what is seen, other meanings behind the words we read, probably because we all came from a place where we were not, a singularity, whether abstract or carnal.

Finally, a recording will be added to the Process Room following a double bill talk given by Timothy ONeill, calligrapher, historian and artist, and Luke Drury, professor and director of the School of Cosmic Physics at the Dublin Institute for Advanced Studies. This talk is taking place on Tuesday 13th July at 4.30pm in the Lecture Room at IMMA.

For printable information on this exhibition please download the following document:

Pascal Bircher’s work combines elements of personal and collective mythology, samples of reality and elements of fiction so as to try to formulate the unfathomable. View Artist
Manage Cookie Consent
By clicking “Accept Cookies”, you agree to the storing of cookies on your device to enhance site functionality and analyse site usage.
Manage options Manage services Manage vendors Read more about these purposes
Cookie Settings
{title} {title} {title}