For this exhibition Irish artist Orla Barry’s new film work Portable Stones, 2005, is being shown for the first time in Ireland alongside other works, such as The Barmaid’s Notebook, 1991 – 2001, and the performance piece Wideawake, 2003.  Barry’s practice is centred on language, written and spoken.  Her work combines the personal with the fictitious in deliberately disjointed narratives in audio and photographic forms. The complexity of her practice is represented by works in which photography, video, sound, slide projection and books are used to search for the place where myth, memory and a sensual physical reality interact. By using several forms of address, including first person voiceovers and texts recited by other people, Barry invents a fiction of multiple “I”s, which enrich our understanding of the unfixed nature of identity. Her use of female personae makes her feminism subtle, witty and pleasantly underhand. 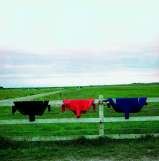 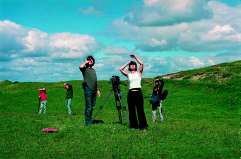 Born in Wexford in 1969, Barry was raised in Ireland, but has lived in Belgium for the last 11 years. She has exhibited extensively internationally, including solo shows in Brussels, Milan, London and Antwerp. Her work has been included in prestigious group exhibitions, such as Manifesta 2, Luxembourg, and Prix de la Jeune Peinture Belge, Brussels.  She was short-listed for the IMMA Glen Dimplex Artists Award in 1999 and is currently participating on IMMA’s Artists’ Residency Programme until March 2006.

The exhibition is a collaboration with Stedelijik Museum Voor Actuele Kunst (S.M.A.K), Gent. It has also toured to the Camden Arts Centre, London.

A catalogue, with essays by Enrique Juncosa, Director, IMMA, and Eva Wittocx, Curator, S.M.A.K., and an interview between Orla Barry and Bruce Haines, Curator, Institute of International Visual Arts, London, accompanies the exhibition.