Not I: An Installation by Neil Jordan

This unique film-based installation, directed by Neil Jordan and featuring the American actress Julianne Moore, is based on Samuel Beckett's play Not I, 1972.  Not I presents an actress seated on a stage with just her mouth visible. The mouth then delivers a long monologue, a constant stream of consciousness.

This unique film-based installation, directed by Neil Jordan and featuring the American actress Julianne Moore, is based on Samuel Beckett’s play Not I, 1972.  Not I presents an actress seated on a stage with just her mouth visible. The mouth then delivers a long monologue, a constant stream of consciousness. Beckett’s friend, and one of his favourite interpreters of his work, Billie Whitelaw recalled her performance of the original work: “I defy anyone to come up with a more intense theatrical experience than Samuel Beckett’s Not I.  In otherwise complete darkness, a disembodied female mouth, known as Mouth, about eight feet above the stage, delivers a hyper-rapid stream of consciousness, a mixture of reminiscence and evasion, an existentially terrifying babble, hinting at deep trauma and extinction of self”. 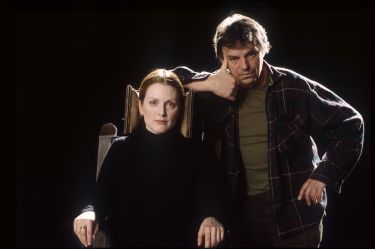 Neil Jordan filmed his interpretation, which is 13 minutes in duration, from multiple angles in long, complete, 13-minute takes, since the piece only reveals itself through the pressure and physical demands of the uninterrupted performance of the text. Realising that each take had its own integrity Jordan developed his original film version into a multi-screen installation in which Moore’s mouth appears on six screens arranged in a circular configuration. For this installation while the artwork maintains its essentially circular configuration, the scale of the Annex, enables the use of especially large screens to create an enhanced, spatially immersive experience.

Not I is part of a unique and ambitious project, Beckett on Film, the brain-child of Michael Colgan, Director of the Gate Theatre, in which each of Becketts’s 19 plays were committed to film in 2000-2001. Each had a different film director, charged with adapting the demands of Beckett’s plays to film while adhering to his exacting stage directions. Not I was adapted for film by Neil Jordan as part of the project and donated to IMMA in 2001.

Born in 1950 in Sligo, Neil Jordan began his career as a writer. Neil Jordan’s film career began with the role of creative consultant on John Boorman’s Excalibur in 1981. In 1982 Jordan wrote and directed his first feature film Angel. Since then he has written, directed and produced more than fifteen films, including Company of Wolves (1984), Mona Lisa (1986), The Crying Game (1992), Interview With The Vampire (1994), Michael Collins (1995), The Butcher Boy (1996), The End of The Affair (1999), The Good Thief (2002), Breakfast On Pluto (2005) and Ondine (2009).  His films have been honoured with numerous awards worldwide, including an Oscar, BAFTAs, Golden Globes, A Golden Lion from The Venice Film Festival and a Silver Bear from Berlin. He has been awarded five honorary doctorates and in 1996 he was appointed Officer of the French Ordres des Artes et des Lettres.  Neil Jordan has more recently written, directed and produced the television series The Borgias, with Octagon Films, and Showtime.  His latest film Byzantium is currently in post-production.