Miquel Barceló: The African Work focuses on works inspired by Barceló’s frequent stays in West Africa, where he has been a regular visitor since 1988 and where he has had a home, in the Dogon area of Mali, since the early 1990s. Comprising some 90 works, the exhibition ranges over the entire period of his association with West Africa, presenting works on paper – some being shown for the first time – large and small-scale paintings, sculptures, ceramics and sketchbooks. 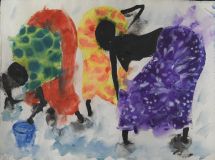 Miquel Barceló is renowned for the extraordinary diversity and originality of his work, which has ranged from a series of spectacular terracotta murals for a chapel in the cathedral in Palma de Mallorca to a mesmerizing performance piece/living sculpture with the Hungarian/French choreographer Josef Nadj. He is currently creating a ceiling painting for the Human Rights Hall at the United Nations offices in Geneva, his most ambitious project to date. Barceló’s amazing creative output has been compared to such great Spanish masters as Pablo Picasso, Joan Miró and Antoni Tapies and to outstanding contemporaries European artists such as Francesco Clemente and Anselm Kiefer. Alongside these major projects, for the past 20 years West Africa has played – and continues to play – a particularly important part in Barceló’s practice. Unlike many artists who have been fascinated with the region, Barceló is drawn not to the exoticism of the area but rather to the daily life of its inhabitants, which he presents in a series of portraits, domestic scenes, landscapes and still lifes.

Born in Majorca in 1957, Miquel Barceló studied at the School of Arts and Crafts in Palma and the Fine Arts Academy in Barcelona. In 1974 he held his first solo exhibition at the Galería d’Art Picarol, Cala d’Or, Majorca. During the 1980s he traveled in Europe, the United States and West Africa and in 1982 he achieved international acclaim for his participation in Documenta 7 in Kassel. Barceló works with a wide-range of media and projects, from paintings and drawings, to backdrops for opera, murals and engravings, and terracotta and ceramic sculptures. From 2001 to 2006 Barceló worked on a project for the cathedral in Palma, covering an entire chapel in terracotta and then decorating it with images relating to the sixth chapter of the gospel of St John. Recent solo exhibitions include Pinacoteca do Estado, São Paulo, 2003; Musée du Louvre, Paris, 2004; Galerie Bruno Bischofberger, Zürich, 2005, and Sala Kubo, San Sebastián, 2005. Barceló currently lives between Paris, Majorca and Mali.

This exhibition will travel to CAC Málaga, Centro de Arte Contemporáneo de Málaga in Spain from 11 November 2008 to 15 February 2009.

A fully-illustrated catalogue has been published with texts by Irish novelist Colm Tóibín and the Spanish poet and novelist José Carlos Llop, a chronology of Barceló’s time in Africa compiled by Amelie Aranguren, former assistant of the artist and an interview between myself and Barceló. We are delighted to collaborate with Turner Libros on the English and Spanish editions of this publication. The catalogue has been produced with the assistance of Marie Donnelly.