Impressions of Le Corbusier are often of an architect with an extensive built output, yet Le Corbusier only produced a handful of buildings throughout his career, as documented in Beatriz Colomina’s book Privacy and Publicity on modern architecture and mass media. Where Le Corbusier altered photographs and drawings for promotional purposes to build up the myth of an extensive portfolio of projects, Mary Ruth Walsh’s drawings and photographs question the accuracy of historical records through what has been written and documented. 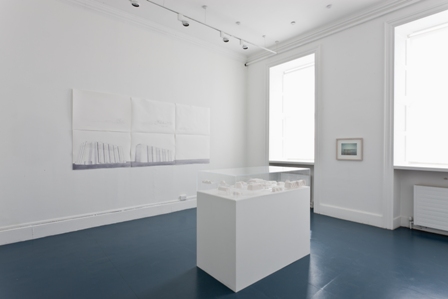 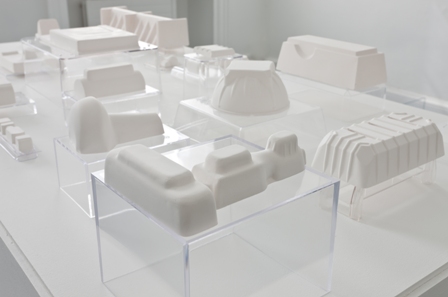 Using the language of seductive surfaces, Walsh’s work acts like proposals or blue prints for compelling spaces, tapping into our 21st century fetish for building plans and imagined constructions. The ideas in the materials, like packaging and brick-a-brac, explore on some level how we think about architecture. The work is not meant to illustrate but rather to engender ideas of why and for whom the space is created, and to contest how space is constructed.

By using the shorthand of architectural tropes the proposals give a sense of cool control of what is to be built, yet a glitch in the translation occurs between the paper plan and the realisation of the building into a physical structure. The paper plan is the miniature, described by Susan Stewart as representing a closure and an interiority. While the full scale building being the exterior and the public, as Stewart suggests represents the gigantic. Hence, questions between paper plan and reality begin to unfold, as the experience of the drawn plan (the seduction) is at odds with the experience of the building (the protective…or the entrapment).

Yet, how strange in this age of self-consciousness which Susan Sontag described in the 60’s as ‘an almost insupportable burden of self-consciousness’ that it is lost on contemporary buildings. Architecture’s self-awareness seems to lag or deny the irony of their tools in drawing as descriptor.

Most building start their life as paper plans and become a statement of our century’s identity, and to some extent our personal identity. Yet the realization of these buildings, when translated into brick or glass and steel, become at times, alien to the original dream. How then do we re-identify with this unintentional translation? Is there a parallel unintentionallity, in that we reshape our complex identities in relationship to these altered buildings?

Susan Stewart, On Longing: Narratives of the Miniature, the Gigantic, the Souvenir, the Collection (1993). Stewart describes areas around the miniature as a ‘social disease of nostalgia’.

The Aesthetics of Silence, an essay commissioned by Brian O’Doherty for Aspen 5+6 (1967)

For a printable version of this information please click

By using the language of seductive surfaces, such as lens-based images, photographs and video, Mary-Ruth Walsh’s interdisciplinary practice creates a double take or a self-consciousness of place and context. Walsh’s inquiry stems from a curiosity and an exploration of real space encounters; including encounters with artwork. View Artist
Manage Cookie Consent
By clicking “Accept Cookies”, you agree to the storing of cookies on your device to enhance site functionality and analyse site usage.
Manage options Manage services Manage vendors Read more about these purposes
Cookie Settings
{title} {title} {title}