Memory is a tricky thing, its fluid, a constantly changing shape in your head. You can’t pin it down, unless there is someone recording it or writing down instantly what you remember. But even then, it is not sure if things really were the way they are recalled – in the moment of recalling memory it becomes something else and before you know it, there is no way back, you’ve lost the real thing.

So what happens if you get lost in one? With one? You might want to be alone – as difficult as it is to convince yourself that you remember something the right way, you want to move on. This is a nearly impossible task if you are with someone who is hell bent on convincing you that you are wrong, and everything was really completely different. Then there is really no way out…or is there? 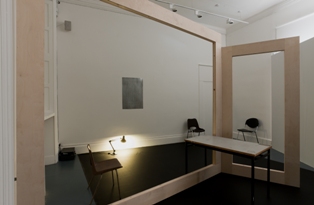 Martina Schmücker presents the momentary stage of her play Feedback Room in the Process Room at the Irish Museum of Modern Art. The play is staged as an audio play in a built theatre set. It is written as a conversation between two people who may or may not have spent the last night together. Each character suggests a memory to the other of the previous events and in the process of the dialogue memories change and visions become blurred.

The word ‘feedback’ describes a communicative situation as well as a technical event. Feedback as sound or image changes the former situation: giving feedback as assurance or critique, enables the person getting it to reassess his/her position or point of view. Feeding back sound or an image through a microphone or a camera is instant, changing the amplified sound or the filmed image. In this process lies a slight delay, which creates again an instant memory of the space or sound seen or heard in a reality and a past at the same time.

When revisiting a memory of a place the recollection of the place often hinges on small details, the recollection is dominated by an emotional relation to the space or to people associated with the memory.
B. M. Stafford writes in Echo Objects “Memory research has many mansions. Of particular interest is what it can tell us about how spatial memories are represented and consolidated in the cortex. Explicit memory of space requires selective attention, filtering some objects for further processing. Implicit memory is involuntary, it is where the unconscious emotional perceptions get processed”. 1

How does this mix of voluntary and involuntary memories influence our recollection of these places, and how does it change them? Does our emotional attachment to certain places make our memory of them inaccurate, or is there no accuracy in memory at all as it is impossible to establish ‘truth’ in a very subjective recollection?

What happens when we revisit these remembered rooms in reality, does our memory of them create a ‘feedback’ on our perception of the reality of the places, and therefore distorts them, as images in our memory?

A central point in Martina Schmücker’s performances is the desire to question the relationship between the viewer and art object. Her works analyze perceptions through what is often the restricted view of the details of the performance. Schmücker is interested in the relationship between what is seen, what is remembered, and how this memory changes with time. Exhibitions include Visual Mechanics, Malta Contemporary, Valletta, 2009; Beyond the Pale Yellow Amusementpark, Campbell Works, London, 2008; The Problem of Error, Gallery Sassa Truelzsch, Berlin, 2008; Glimpse Gallery KraskaEckstein, Bremen, 2007; Chateau Ivre, Schloss Sacrow, Potsdam, 2007; Contained, Hiscox Art Projects, London 2007; New Contemporaries, London, 2005, and Let Me Hear Your Body Talk, Arti et Amititiae, Amsterdam, 2005.

For a printable version of this information please download the following document: martina_schmucker_pr.doc