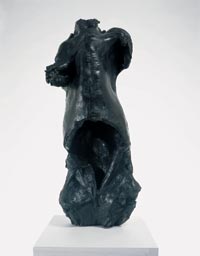 Marc Quinn: Flesh is the first solo exhibition in Ireland by British artist Marc Quinn, best known for his strikingly original sculptures based on the human body. The exhibition presents 14 new sculptures cast, in this instance, from the meat of various animals. Despite this new medium, Quinn’s recurring themes – of life and death, heroism and suffering and man’s physical and psychological boundaries – persist to powerful effect. Quinn’s original and affecting treatment of these universal concerns and his unfailing resourcefulness in his means of expressing them have made him one of the most important of that generation of artists who acquired celebrity in the 1980s and ’90s as yBa (young British artists). Moulded from cuts of meat and cast in bronze and black patina, the works in Flesh are formally displayed on plinths to heighten their relationship to art historical figurative sculpture, another defining feature of Quinn’s work. Titles such as ‘Reclining Figure (Venison)’, 2004, ‘Torso (Lamb)’, 2003, and ‘Standing Figure (Beef)’, 2004, all evoke classical and modern sculpture. The poses are also familiar, from the compactness of the Pieta-like scene in ‘Mother and Child (Rabbit and Lamb)’, 2004, to ‘Torso (Stag)’, 2004, with its clear echoes of the stretched torso of a Rodu centauress. Born in 1964, Marc Quinn graduated from Cambridge University in 1985 and then became an assistant to sculptor Barry Flanagan, now a resident of Dublin. He first showed with Jay Jopling in 1988 and since then has exhibited extensively in Britain and internationally, with solo exhibitions at the Tate Gallery, London (1995); the Kunstverein Hanover, Germany (1999); the Funadazione Prada, Milan (2000); Tate Liverpool (2003) and the Venice Biennale (2003). The exhibition is presented in partnership with the British Council. A publication, with a foreword by Enrique Juncosa, Director, IMMA, and essays by Susie Orbach, writer, Darian Leader, critic, and Rachael Thomas, Acting Head of Exhibitions, IMMA, accompanies the exhibition.