Line Exploring Space: Drawings from the IMMA Collection in Thurles 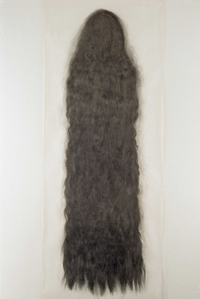 Line exploring space: Drawings from the IMMA Collection opens at The Source Arts Centre, Thurles, Co Tipperary, at 8.00pm on Thursday 9 September 2010. The exhibition continues at the Tipperary Institute, Thurles Campus. The collaboration is the result of an established relation between The Tipperary Institute and The Source Arts Centre. However, it is the first time both venues have worked together with the National Programme at the Irish Museum of Modern Art.

During the 1960s, as abstract art gained prominence, there was a widespread rebellion against the traditional methods of drawing. As a result drawing became largely a preparatory exercise with many works remaining unseen in the artist’s studio. Within the last decade, however, drawing has been reenergised by the widespread proliferation of imagery. Line exploring space aims to explore the diverse nature of drawing through the display of traditional methods of drawing and its relation to photography, film, print and installation. The exhibition includes artwork by artists such as Alice Maher, Hughie O’Donoghue, Stephen Brandes, David Godbold and Garrett Phelan.

Alice Maher’s The Music of Things, explores drawing through an animated film. This is the first example of moving imagery in Maher’s work, and is an example of the artist’s continuous quest to develop her work through new languages and new materials. Beginning with a sheet of A4 Hahnemühle paper, Maher scanned each stage of the pencil drawing at 10-minute intervals preserving the images as documents in a computer. There is no ‘actual’ drawing, just the record of its many stages. When added together as an animated sequence the drawings form a peculiar imaginative narrative. It follows the twists and turns of the artist’s decision-making process, becoming witness to the evolution of a series of images that never remains constant but grows and morphs with thought and time.

Stephen Brandes also presents work with a fantastical narrative. Using the pictorial language of European fairytales, 20th-century poster design and medieval cartography, his large graphic works represent fantastical, dysfunctional landscapes that suggest places from history and fairytales, while the smaller paintings and drawings often imply imagined fragments of tales. Brandes, like Maher, employs a variety of styles and materials, from small paintings and collages, to vast highly detailed drawings on unexpected surfaces (like used floor vinyl or straight onto the gallery wall) such as Hotel Amnesia.

IMMA’s National Programme is designed to create access opportunities to the visual arts in a variety of situations and locations in Ireland. Using the Collection of the Irish Museum of Modern Art and exhibitions generated by the Museum, the National Programme facilitates the creation of exhibitions and other projects for display in a range of venues around the country. The National Programme establishes the Museum as inclusive, accessible and national, de-centralising the Collection, and making it available to communities in their own localities, on their own terms, in venues with which the audience is comfortable and familiar.

The exhibition is accompanied by artist led discussion and workshops.

A retrospective publication will be produced and will include responses by artists John Beattie and Christine Mackey.