The installation work, Literally Based on H.Z., 2006, by Liam Gililck, acquired for the IMMA Collection in 2007, is on show for the first time since its acquisition at IMMA. When creating the work Gillick consulted the Austrian artist Heimo Zobernig to devise a platform to present a number of prototypes and models, the resulting ten trestle tables which were subsequently produced now form part of the work. This is pointed to by the title of the piece, Gillick’s work is literally based both physically and conceptually on the output of another artist. 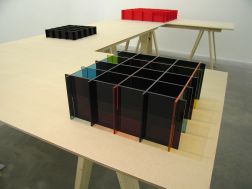 Gillick’s work is shaped by an acute visual awareness of the way different properties of materials, structures and colour can affect our surroundings and therefore influence the way we behave. The objects on the tables are a combination of prototypes, potential signage and models, and they have been developed around Gillick’s ongoing engagement with writing on social utopias; in particular he has been working on a series of texts, exhibitions and lectures with the overall title Construcción de Uno for a number of years. The text refers to an experimental factory, recently closed, where the former workers or ‘producers’ return to their original work place and over time start to work in the now redundant space – their ‘product’ now being ideas and change, they begin to remodel the building, draw on the floor and break windows into formerly blocked up walls. Much of the work for this project is based on academic research produced in South America concerning experimental, socially conscious working practices in Sweden in the 1970’s.

Perhaps referencing the idea of introducing flexibility in the workplace as discussed in the Construcción de Uno text, the work can be installed in a number of different ways, and as the medium of the piece states, the permutation is ‘to be arranged by the user’. Here the work is installed in a relatively small windowless gallery space, it could equally occupy an entire corridor wing of the Museum, and as a work in the IMMA Collection, it will be interesting to see how future ‘users’ configure the elements.

Gillick was born in Aylesbury, England in 1964 and graduated with a BA in Fine Art from Goldsmiths College, University of London in 1987. Liam Gillick has been exhibiting internationally since the beginning of the 1990’s. He was short-listed for the Turner Prize in 2002 and has had solo exhibitions, amongst others, at The Whitchapel Art Gallery, London (2002); The Museum of Modern Art New York (2003); Baltimore Museum of Art, USA (2005), and Palais de Tokyo, Paris (2005). Recent collaborative / group projects include Edgar Schmitz, ICA, London (2005); Briannnnnn & Ferryyyyyy, Kunsthalle Zürich (2006); Unitednationazplaza, Berlin (2006); Construcción de Uno, Tate Britain, London (2006), and theanyspacewhatever, Guggenheim Museum, New York (2008-2009). Liam Gillick lives and works in New York and London and will present at the German Pavilion The future always acts differently, Biennale di Venezia, 2009.

To read the introduction text to the installation please download the following pdf document:

Literally Based on H.Z. is shown in the context of the exhibition Between Metaphor and Object: Art of the 90s from the IMMA Collection