Following on from his notable participation in the group exhibition .all hawaii eNtrées / luNar reGGae at IMMA in 2006, Cuban-American artist Jorge Pardo returns to IMMA with his first major solo exhibition in Ireland. One of the most influential artists of his generation, Pardo utilises and explores new media and the future of art within new technology to present an exhibition which is at the forefront of art practice today. The result is a highly conceptual virtual retrospective comprising photomural wallpaper that covers the walls of the entire East Wing Galleries. This features images of Pardo’s work from throughout his career, including sculpture, installations, design and architecture. There are no 3D objects. Instead, every aspect of the exhibition, including labels and wall texts, is incorporated into the wallpaper, which also features influences on Pardo’s work and reads like a pictorial history of the development of his practice. 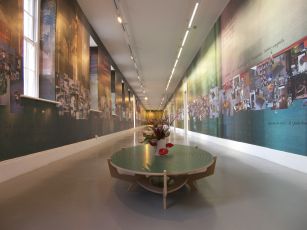 This virtually-curated exhibition raises many questions relating to perception of spaces and to pre-conceptions of what an exhibition should be, as well as examining how comfortable viewers are in their own space. Historically, this can be traced to the Hungarian artist Lâszló Moholy-Nagy who designed The Room of out Time, 1930, in the Hanover Museum. This lacked the physical presence of any original work of art; instead all works were presented as radical re-productions. Pardo’s exhibition at IMMA echoes this concept, with all documentation becoming a poetic virtual journey of images that work in harmony with the architecture of the museum.

Pardo is among the first generation of artists to utilise fully the advancement in computer technologies to explore virtual spaces, utopias and the boundaries of museum spaces. Using the language of architecture and design to engage with fine art, Pardo’s practice intertwines various disciplines to renovate everyday objects, homes and museum spaces into something new that draws the viewer into an active spectatorship. His influences include artist Robert Smithson, exhibition designer Lilly Reich, architects Bruce Goff and Tadao Ando, and influential 20th-century Finnish designer Alvar Aalto. Pardo addresses issues of space and environment, the valuations of objects and artworks, questioning where art ends and real life begins.

The exhibition is accompanied by a seminal catalogue that challenges the very format a catalogue should take. Using the formal structural conventions of a catalogue, this book is a 21st-century interpretation. The commissioned essays become a live embodiment of the author, resulting in a five-way conference between the writers that can be seen on the internet. The writers include Jorge Pardo; Rachael Thomas; Alex Coles, art critic; Shumon Basar, architect, writer and curator, and Shamin M. Momin, Founder/Director of the recently formed Los Angeles Nomadic Division (LAND). The resulting audio has been transcribed and used as the text for the catalogue, which is available to download from YouTube. It is also published as an eBook which is available to purchase online for €5.00. The catalogue is presented in the exhibition in the form of a series of tables on which text, images and everything one has come to expect in a catalogue can be read.

A limited edition lamp by Jorge Pardo is available to buy, please click here to purchase.

This exhibition has received support from an anonymous donor.

to listen to the audio version of the catalogue

View installation images of the exhibition on IMMA’s facebook page

A limited edition lamp by Jorge Pardo is available to buy, please click here to purchase.