In Praise of Shadows

In Praise of Shadows focuses on shadows, shadow theatre and silhouettes, based on old and contemporary folk tales and simple narratives, it explores the traditional art form of shadow plays and their influence on the world of contemporary art in recent years. The exhibition brings together key works by eight contemporary artists from seven different countries and two master filmmakers. In Praise of Shadows comprises some 90 works, from free standing models of theatres to drawings, collages and wall installations. It also features a significant number of rare figures and silhouettes, films, photographs, texts, and manuscripts pertaining to shadow theatre, and early silhouette and stop-motion movies. At the heart of the exhibition is the shadow theatre tradition of Turkey and Greece, and its character Karagöz, known as Karaghiozis in Greece, an ever hungry trickster that lives through hundreds of adventures and misadventures with a varied set of characters. Karagöz dates back to the 16th-century in Turkey and to the 19th-century in Greece. His stories are still performed today by puppeteers who have adapted his adventures for today’s public. 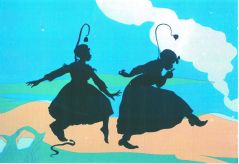 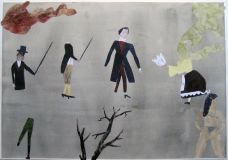 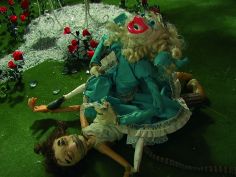 The exhibition centres mainly around three artist Jockum Nordstrum (Sweden), Kara Walker (USA) and William Kentridge (South Africa), complemented with the work of some other artists. Kara Walker’s videos and silhouette installations have many correspondences with the theatre of Karagöz and Karaghiozis. Walker has in recent years embraced the techniques of shadow plays and has employed them in her video animations as well as in her shadow plays Fibbergibbet and Mumbo Jumbo, 2004. Works by William Kentridge will include the free-standing theatre and the preparatory drawings for Preparing the Flute, an abridged version of Mozart’s The Magic Flute. Also included are early materials from his future production of Shostakovich’s opera The Nose for the Metropolitan Opera in New York, scheduled for 2010. The exhibition includes a collaboration by Kentridge and Walker, a two-minute video work, made in 2004 and never shown before. It also brings together key works by Haluk Akakce, Nathalie Djurberg, Katariina Lillqvist, Christiana Soulou and Andrew Vickery.

In Praise of Shadows is accompanied by a fully-illustrated catalogue designed and produced by CHARTA, with texts by the following authors: Metin And, Evamarie Blattner, Paolo Colombo, Lewis Hyde, Enrique Juncosa, William Kentridge, Carolina Lopez, Francois Martin and Lotte Reiniger. To buy the catalogue click here

FRAME, the Finnish Fund for Art Exchange, are sponsors of the exhibition.

Presented with the support of the Culture Programme of the European Union.