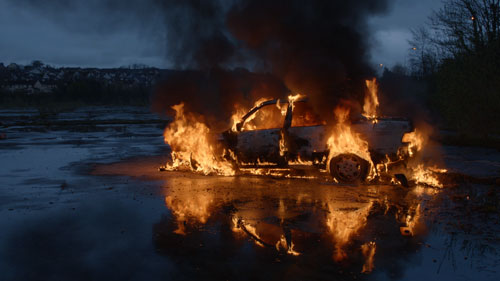 A key display within the exhibition IMMA Collection: A Decade is Remains, 2013, by Willie Doherty. A recent acquisition to the IMMA Collection it is a powerful fictitious film based on real events. As part of a spate of punishment shootings in 2012 in Derry by the dissident Republican group Republican Action Against Drugs (RAAD), a father was ordered to bring his son and another boy, a cousin, to a specified location to be kneecapped. Such punishments were administered by the IRA to control drug use or anti-social behaviour during the conflict in the North of Ireland but are now used by dissident republicans to exert control. Commenting on the work Doherty stated “I revisit these same locations in Remains to explore the idea of the generational nature of the conflict, how it passes through families and the vicious circle that people can get caught up in”.