Belgian artist Francis Alÿs is a compulsive wanderer, whose personal explorations of the cities in which he finds himself form the basis for an eclectic body of work. Working with documentary film and photography, video, painting and performance, he compiles a succession of notes and guides, in a highly individual style, which reflect specific social and economic conditions, particularly political subjects such as border disputes and economic crises. A close observer and occasional manipulator of the quirks of everyday life, Alÿs responds to fleeting and contingent circumstances from the view-point of a passer-by, who is at once involved and separate. 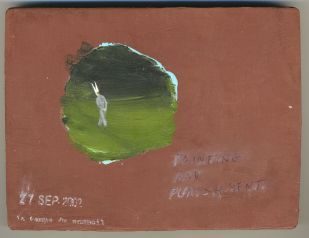 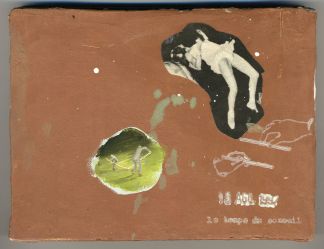 For his exhibition at IMMA Alÿs presents his on-going series Le Temps du Sommeil, which he began in 1996 and which currently comprises 111 small-scale paintings. Accompanied by instructions and postcards which resemble a diary, the work relates in an oblique way to visions of games and exercises seen in many of his actions and films. This series is being shown at IMMA before it travels to Tate Modern, the first stage in an international retrospective of Alÿs’s work.

In 1993, while in Mexico City, Alÿs described his working process "…I spend a lot of time walking around the city… The initial concept for a project often emerges during a walk. As an artist, my position is akin to that of a passer-by constantly trying to situate myself in a moving environment. My work is a succession of notes and guides. The invention of a language goes together with the invention of a city. Each of my interventions is another fragment of the story that I am inventing, of the city that I am mapping."

Born in 1959, Francis Alÿs studied architecture at the Institut d’Architecture de Tournai in Belgium, 1978–83, and at the Instituto Universitario di Architettura in Venice, 1983–86. After his studies he travelled to Mexico in 1987 to work as an architect, where he continues to live. He has been exhibiting as an artist since 1991. Alÿs’s work has been extensively shown worldwide, recent exhibitions include in 2009 – Shanghai Art Museum; The National Museum of Modern Art, Tokyo, and Centro Galego de Arte Contemporánea, Santiago de Compostela; in 2008 – KW Institute for Contemporary Art, Berlin; San Francisco Museum of Modern Art; Kiasma Museum of Contemporary Art, Helsinki, and Istanbul Museum of Modern Art. His work was included in Order. Desire. Light. an exhibition of contemporary drawings shown at IMMA in 2008.

The exhibition is curated Catherine Lampert, curator and former Director of the Whitechapel Art Gallery.

The exhibition is accompanied by a fully-illustrated catalogue, published by IMMA and Chart, Milan, comprising reproductions of all 111 paintings which are an essential key to understanding the imagination of one of the most original and poetic artists of our times. The publication includes an afterword by Enrique Juncosa, Director, IMMA. Please click here to buy the catalogue.

The exhibition has received assistance from the Embassy of Mexico in Dublin. The opening reception is supported by Corona Extra.