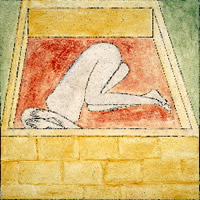 The first major exhibition in Ireland by the internationally-acclaimed Italian artist Francesco Clemente comprises more than 60 works, including some 20 paintings, 10 pastels and 30 watercolours. All have been created since Clemente?s comprehensive retrospective at the Guggenheim, New York, in 2000 and most are being shown publicly for the first time.
Clemente first came to international attention as part of the Italian Transavanguardia group in the late 1970s and early ?80s, a period which saw a renewed interest in painting internationally, evident in the success of artists such as Julian Schnabel and Anselm Kiefer. From the start, however, Clemente manifested a singular personal vision, drawing on a diverse cross section of cultures and styles to realise his wide range of visual and conceptual ideas. Extensive travels in Europe, the Caribbean, Egypt, Japan, New Mexico and, in particular, in India, have been a major influence, releasing him from the usual conventions of art making.

Writing in the catalogue to the Guggenheim show, its curator Lisa Dennison describes Clemente as having made ?a new and unique contribution to the art and culture of his times. His method is contemplative, meditative, and indulgent. He maintains a fantastical, exotic vision, even when dealing with the commonplace. The paradoxes in his work ? the blurring of boundaries between interior and exterior, between self and others, between the physical and psychical ? are what sustain its interest for us most deeply, and what continually open up its possibilities for the future?. The recent works being shown at IMMA include images of the human body and also of everyday objects, such as stairs, wheels, vases and animals.

Born in Naples in 1952, Clemente moved to Rome in 1970 to study architecture, but soon turned instead to drawing and poetry. In 1975 he had solo exhibitions in Brescia, Milan and Turin and a group show in Rome. At the Venice Biennale in 1980, Clemente commanded the attention of an international audience and following this event he went on to play an influential part in the international revival of Expressionism in the 1970s. Numerous exhibitions followed, including the Whitechapel, London, (1983); the Nationalgalerie, Berlin, (1984); the Fundacion Caja, Madrid, (1987); the Sezon Museum, Tokyo, (1994) and the Metropolitan Museum, New York, (1997).

The exhibition is curated by Enrique Juncosa, Director, IMMA, and has been co-produced with the Reykjavik Art Museum, Iceland. The exhibition is presented in association with THE IRISH TIMES.