Spanish painter Ferran Garcia Sevilla is a collector of images. His eclectic pictorial style draws on his travels in the Middle East, and on comic books, urban graffiti, philosophy and Eastern cultures, resulting in great sensuous open spaces in which everything blends together, both in terms of iconography and ideas. His raw, colourful, primitive canvases are often peppered with caustic, hand-scrawled commentaries on life and politics. These paintings display the use of automatism, playfulness and flat symbols, and figures floating over solid ground. Turning to ancient and non-Western sources, he has long employed religious symbols – the hand, circle, tree, triangle and cross. His aim is to empower and also challenge these charged forms, not to trivialise them. The exhibition includes major bodies of work including the Deus series, 1981, works previously shown at Documenta VIII, 1988, alongside new works from the artist’s studio. 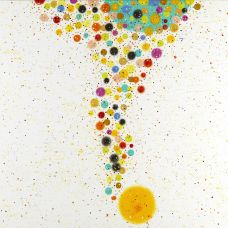 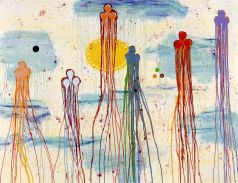 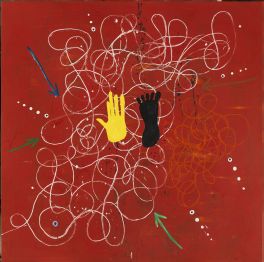 The exhibition is co-produced by the Irish Museum of Modern Art in collaboration with Patio Herreriano, Museo de Arte Contemporáneo Espanol, Valladolid, Spain, where it will be shown from 2 October 2010 to 9 January 2011.

The exhibition is supported by Institut Ramon which promotes Catalan language and culture internationally.

A Limited Edition print by Ferran Garcia Sevilla, Untitled, 2010, is available to buy, for more information please follow the link to IMMA Editions

To buy the catalogue for the exhibition please click here