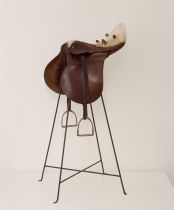 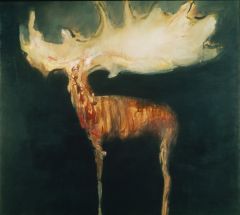 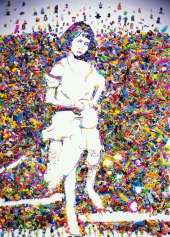 Also known today as Consequences, the game Exquisite Corpse was invented by the Surrealist poets in 1925 and derives its name from a phrase used by them:  Le cadavre exquis boira le vin nouveau (The exquisite corpse will drink the new wine). This involved several participants creating a poem or drawing with the idea of the body as a point of departure. A crucial element was that each player was unaware of what the others had written or drawn, resulting in a sequential collage of words or images.

The paradoxical title Exquisite Corpse itself influenced diverse choices and responses. Some works evoke the body in a visceral sense, others through abstract means, and some both at the same time, such as From the Mechanism of Meaning, 1971, by Shusaku Arakawa, chosen by Mick Wilson. Nicola Lees’ selection is a response involving the Ulysses inspired prints of Richard Hamilton from the Collection and a book installation by artist Simon Popper consisting of 120 copies of his alphabetized version of Ulysses. Artist Mark Garry’s selection plays on the ruse inherent in the game by inviting Erin Potts to choose the artwork and collaborating with Dianne De Stefano and Potts to evolve the text. The other participants are Gerald Barry, Aileen Corkery, Jonathan Carroll, Michael Craig-Martin, Deirdre Horgan, Jaki Irvine, Nicola Lees, Tony Magennis, Lisa Moran, Frances Morris and Colm Tóibín.

A fully-illustrated publication, with an introduction by Christina Kennedy and texts by all the participants, accompanies the exhibition.

The National Programme is supported by the Department of Arts, Sport and Tourism.

Exquisite Corpse on show at IMMA