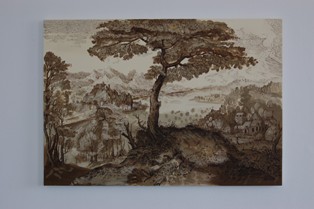 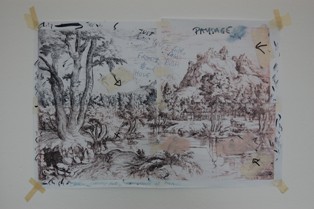 Given that David Godbold’s well-established practice is based upon a complex layering of inter-textual quotation – dominated by language and humor – it is somewhat ironic that he has spent the past couple of years endeavoring to achieve an artistic and intellectual position equivalent to a sort-of existential nothingness.

In his current body of work he expresses an interest in Charles Baudelaire’s metaphysical conception of surnaturalisme; a point, or non-physical place of transcendence, beyond the ‘grey flats of the everyday’, achievable, according to Baudelaire, with a rigorous (but combustible) combination of ‘art, prayer and drugs’. Godbold’s last major Irish exhibition (Kerlin Gallery, 2008) literally took this as its title and experimented with conceptual, imagistic and painterly solutions to a like objective.  The central work of his Process Room, No thoughts, 2007-9, is a large canvas on which he has been working for the past two years, and through its calligraphic repetition and faux-sublime imagery he attempts to construct a dialogue around the idea of nothing as an all-consuming something.

Formally Godbold’s recent paintings are loosely based on the mimetic structures of 16th and 17th century Netherlandish and German landscape drawings and prints, but they are as strongly influenced by low-grade mid-20th century mass culture, such as four-colour textile prints and wallpaper, as well as its impact on Pop Art. This collision and re-intergration of cultures is characteristic of his greater practice, which fuses high and low art, image and text, the melancholy with the humorous and the past with the present.

Godbold (born U.K. lives and works in Ireland) has exhibited extensively with recent solo shows in Antwerp, Dublin, Hong Kong, Munich, New York and San Francisco. He is currently working towards an exhibition for the Butler Gallery in Kilkenny. His work is represented in Ireland by Kerlin Gallery, Dublin and is included in the collection of The Irish Museum of Modern Art. Further information can be found at www.kerlin.ie.

For a printable version of this information please download the following document David Godbold: No thoughts (Word doc 2000 – 140KB)

David Godbold was born in England and educated at Goldsmith's College, London. He came to prominence in the 1980s as one half of the duo Godbold & Wood. He now lives and works in Ireland. Godbold has exhibited widely with solo shows in Ireland, Britain, Italy, France, Australia and Belgium. He was a Rome scholar at the British School in Rome, 2002 and participated in the Artists’ Residency Programme at IMMA in 2009 and. His work is in many private and corporate collections throughout Europe, Australia and the USA. View Artist
Manage Cookie Consent
By clicking “Accept Cookies”, you agree to the storing of cookies on your device to enhance site functionality and analyse site usage.
Manage options Manage services Manage vendors Read more about these purposes
Cookie Settings
{title} {title} {title}