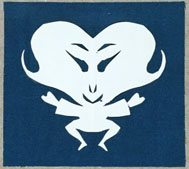 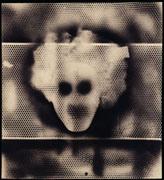 Though Andersen and Burroughs are known largely for their literary masterpieces, their visual work, has to date received little exposure. Key to the 124 works in this exhibition is the artists’ mutual engagement with cutting-out pictures and stencils which involve silhouettes and shadows. Their use of brilliant colours and metallic surfaces relate closely to their writings. The Andersen material consists of a wide range of drawings, cut-outs and picture books containing his original collages. The Burroughs artworks include paintings on paper and wood, collaborative projects with lifelong friend, the artist Brion Gysin – these include pages for The Third Mind, 1978, as well as their legendary Dreamachine.

Hans Christian Andersen was born in Odense, Denmark, in 1805, the son of a washerwoman and a shoemaker. At the age of 14 he moved to Copenhagen to pursue an acting career. Between 1822 and 1827 he attended the Slagelse and Helsingør Grammer Schools. Throughout his life he wrote a number of plays and travel books inspired by his ongoing travels in Europe, and is best known for his popular fairytales such as The Little Mermaid, The Red Shoes and The Ugly Duckling. The majority of his visual works, including the picture books, date from the 1850s to his death in Copenhagen in 1875. William Seward Burroughs was born in 1914 in St Louis to a wealthy family. He studied at Harvard and travelled to Mexico, Colombia, Peru and Morocco between 1945 and 1950. Appropriating the cut-up technique developed by Gysin in the 1950s, Burroughs produced some of his most influential writings, extending the language first developed in his groundbreaking novel Naked Lunch, 1959. While living in Paris, London, New York and Lawrence, Kansas – where he died in 1997 – Burroughs never stopped experimenting with writing, film, sound and visual art.

The exhibition is curated by Hendel Teicher, independent curator and art historian.

The exhibition features music by the Master Musicians of Joujouka. Further information may be found at
www.joujouka.net