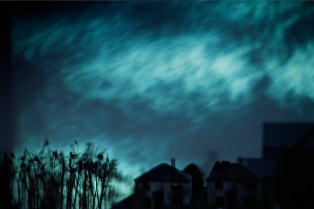 This three-minute pilot is a section from a larger film project being made at the moment. These interior scenes were shot in a house outside Dublin. While on the AWP at IMMA I’ve been shooting ‘exterior scenes’ using architectural models and back-projected films, which will be edited into the final film. I will also shoot scenes on location in the landscape.
My working practice involves using handmade filters and lens attachments. They are shot on 16mm Film and transferred to DVD. There is no alteration of the images in the post-production.

My previous film project, A Film Trilogy explores mankinds fragile existence in the face of the limitless forces of nature – spanning the extremities of ice and flooding, to wind and desert, and finally to fire and lava. The films depict the impact of this monumental devastation on the human habitat while, at the same time, posing the question how much this grim fate might be self-inflicted.

Metamorphosis begins where the trilogy left off. It explores our inherent fight for survival in a hostile, transitory world. It is a film about regeneration, renewal, and rebirth. This time it is evident that it is not the elements that are at the root of the destruction, but mankind itself. The film will be completed by the end of 2005.

For more information on this project please click here

IIrish artist Clare Langan studied fine art at the National College of Art and Design, Dublin. She received a Fulbright Scholarship to New York University in 1992. Langan evokes feelings of nostalgia, loss, and isolation in her atmospheric films. She represented Ireland at the São Paulo Biennale in 2002. In 2003 Langan presented her ambitious ‘A Film Trilogy’ at MoMA, New York and the Royal Hibernian Academy, Dublin. The following year, she took part in ‘Tír na nÓg’, a group show at IMMA. View Artist
Manage Cookie Consent
By clicking “Accept Cookies”, you agree to the storing of cookies on your device to enhance site functionality and analyse site usage.
Manage options Manage services Manage vendors Read more about these purposes
Cookie Settings
{title} {title} {title}