Cuban artist Carlos Garaicoa has been working since the early 1990s using a multidisciplinary approach that includes architecture and urbanism, narrative, history, and politics. Adopting the city of Havana as his laboratory, his works are charged with provocative commentaries on issues such as architecture’s ability to alter the course of history, the failure of modernism as a catalyst for social change and the frustration and decay of 20th-century utopias. Interested in urban planning and a city’s architectural social fabric, Garaicoa often illustrates his vision in large installations using various materials such as crystal, wax candles and rice-paper lamps. 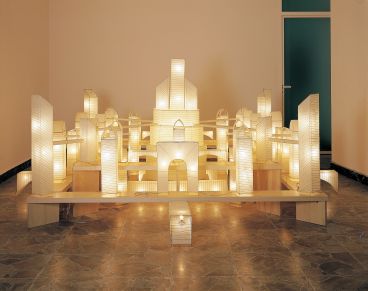 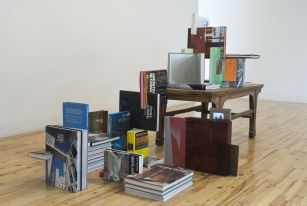 Garaicoa’s exhibition includes new and recent works which demonstrate his varied articulations of architecture such as The Crown Jewels, 2009, in which miniature replicas of real-life torture centers, prisons and intelligence networks are cast in silver; My personal Library Grows-up Together with My Political Principles, 2008, in which books are assembled to form architectural frameworks and Bend City (Red), 2007, a city constructed entirely from cut paper.

Cuban life—social, political, and cultural—inspires Garaicoa’s work. After the Cuban revolution in 1959, many architectural projects and buildings were left unfinished or abandoned, in Havana and in other Cuban cities. Garaicoa created a series of pop-up books depicting the decrepit turn-of-the-century buildings in Havana’s Plaza Vieja district and other cities. Garaicoa also addresses these collapsed buildings by pairing black-and-white photographs with drawings made of thread rendering the reality of the absence of these structures.

Born in Havana, Cuba, in 1967, Carlos Garaicoa studied at the Instituto Superior de Arte in Cuba from 1989 to 1994. Recent exhibitions include the Venice Biennale, 2009; Havana Biennale, 2009; La Caixa Cultural, Rio de Janeiro, 2008; Institute of Contemporary Art, Philadelphia, 2007, and the Royal Ontario Museum, Toronto, 2006. He lives and works in Havana and Madrid.