Artists/Heaney/Books: An Exhibition is shown to coincide with the celebration of Seamus Heaney’s 70th birthday, and is presented in association with the Department of Arts, Sport and Tourism and RTÉ. Throughout his career Heaney has developed friendships and collaborated on imagery with a variety of artists, including Barrie Cooke, Felim Egan, Barry Flanagan, T.P. Flanagan, Martin Gale, Cecil King, Sol LeWitt, Hughie O’Donoghue and many others. The exhibition features an extensive display of the poet’s book collaborations, as well as selected artworks from IMMA’s Collection by the artists in question, with loans from the Ulster Museum and other sources. 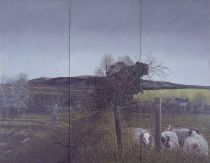 In Heaney’s honour, Barrie Cooke has worked with Stoney Road Press to produce a new IMMA limited edition print, with passages in the poet’s own hand, which will be included in the exhibition. A short interview with Christina Kennedy, curator of the exhibition and Head of Collections at IMMA, with Seamus Heaney on his thoughts around art and poetry will accompany the exhibition.

Seamus Heaney was born in 1939 near Castledawson, Co Derry. The eldest of nine children he won a scholarship to St Columb’s College in Derry and later attended Queen’s University Belfast where his first books of poems were written. He was a teacher in Belfast from the 1960s and has since held many positions including Professor of Poetry at Oxford and Professor of Rhetoric and Oratory at Harvard University. A Saoi of Aosdána, he is one of the most admired and popular writers of our time. Best known for his poetry, his works also include plays, translations and essays. Among his many achievements is the Nobel Prize for Literature in 1995.