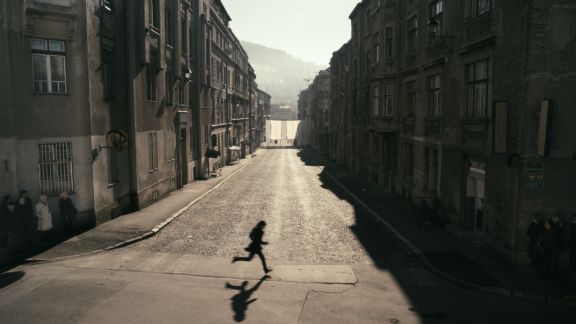 Anri Sala’s breathtaking 1395 Days Without Red, 2011, a collaborative film-project between Sala and composer Ari Benjamin Meyers, is presented in the Annex space at the NCH site. The presentation also includes an exciting new work in response to this space and the musical score from the film.

The siege of Sarajevo lasted 1,395 days. From 1992 to 1996, thousands of citizens had to cross streets threatened by snipers everyday: to go to work, to buy food, to visit a relative. The citizens wore dark colours, for fear of alerting their movements to the snipers watching from the hills above.  In Sala’s film an elegant young woman makes her way through an empty city.  At every c 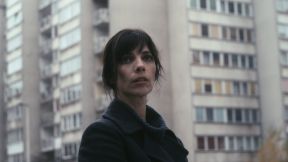 rossing she stops, looks and listens.  Should she wait or should she run?  Should she wait for others or take the risk on her own? The city is Sarajevo, and the route the woman takes, became known as Sniper Alley during the siege of the city. The woman, played by Spanish actress Maribel Verdú, is reliving the experience of the trauma of the siege.  It is her individual journey through the collective memory of the city.

Throughout the siege, the Sarajevo Symphony Orchestra continued to play. In Sala’s film, the orchestra rehearses Tchaikovsky’s 6th symphony, the Pathetique. The musicians stop and start, repeating different sections of the symphony, just as the woman stops and starts in the city. Hearing the music in her head, she finds the courage to carry on.

Artist Talk
At 6.00pm on Wednesday 30 May Anri Sala and Ari Benjamin Meyers discuss their collaboration with Declan Long, Lecturer in Visual Culture at the NCAD, in the Lecture Room at the NCH building. Admission is free but booking is essential, please click here to book.

RTÉ National Symphony Orchestra Concert
On Friday 22 June at the NCH the RTÉ National Symphony Orchestra, in a first collaboration with IMMA, will performing Tchaikovsky’s ravishingly beautiful Pathétique symphony, heard to such effect in Sala film. Being presented under the title Beauty and brilliance, the concert is conducted by Christian Kluxen and also includes Rachmaninov’s soaring Third Piano Concerto performed by prize-winning Korean pianist, Ann Soo-Jung. The concert, part of the NSO’s Summer Evening Concert Series, begins at 8.00pm and will be broadcast live on RTÉ lyric fm. Tickets from €10, to book visit www.nch.ie

Born in Tirana, Albanian, in 1974, Anri Sala is one of the most outstanding young artists working today.  His works are meditations on slowness in which camera movement is practically non-existent.  In contrast with the speed of images in the media, Sala often freezes scenes into still-shots in order to highlight apparently trivial details.  Sala has exhibited extensively, including the Tate Gallery, London, 2004; ARC, Musée d’Art moderne de la Ville de Paris, Paris, 2004; Kunsthalle Wien, Vienna, 2003; the Dallas Museum of Art, Dallas, 2002; and the Ikon Gallery, Birmingham, 2002.  He is the recipient of numerous prizes, including the Young Artist Prize at the 49th Venice Biennale, 2001; the Prix Gilles Dusein, Paris, 2000; the Best Documentary Film Award from the Tirana International Film Festival (TIFF), 2000, and the International Film Festival in Santiago de Compostela, 1999.

The exhibition is supported by the Conrad Hotel Dublin and Feast Catering.